This article explores the assumptions of the Schelling segregation model. How realistic is this model in explaining real life segregation?

We have seen how Schelling’s model can explain the emergence of segregation, even if none of the individuals really wants this to happen. Let us now see what this can tell us about conditions under which real segregation can arise. For example, suppose we knew what preferences agents have for the composition of their neighbourhoods and how frequent each of the group is in the population. Then we can tell whether mixed neighbourhoods are in principle sustainable. This can also tell policy makers how big in a real city the potential for self-organized segregation actually is.

To give a simple example: consider a city with 20% green inhabitants and 80% red inhabitants. If we initially mix groups randomly, then every neighbourhood has on average a 20/80 mix. 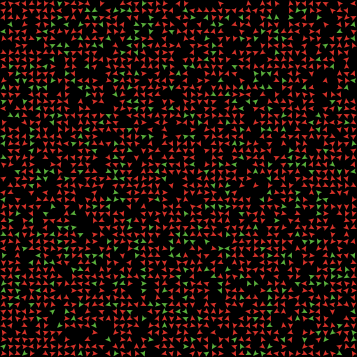 But this means that such a mixed composition cannot be sustained if agents want to have at least 30% neighbours of their own kind. Then, self-organized segregation is likely to happen. Here you see how this initial configuration typically evolves when we run the model from this configuration. 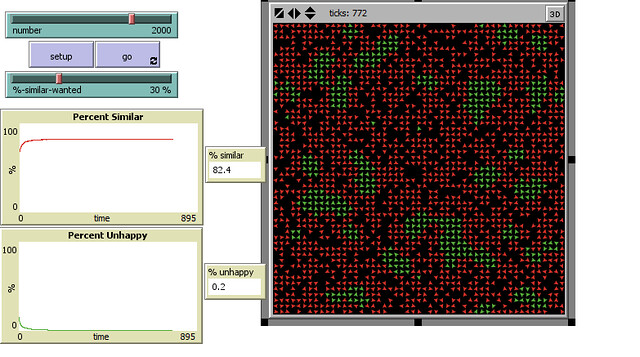 After some time agents have clearly segregated into clusters of green and red and almost everyone is satisfied. Interestingly, the model also implies that a few green agents will remain who are dissatisfied but cannot find a location that makes them happy. The reason is that the green clusters that have formed are tightly surrounded by red agents so that there is no location left where those remaining green agent would find enough neighbours of their own kind.

You may wonder how realistic all this is for real cities. Actually, research shows that the ethnic preferences real people have suggest a strong potential for self-organized segregation. Clark and Fosset (2008) report results from a study on the ethnic neighbourhood preferences of people in the Los Angeles area in the US. Researchers asked about 4000 participants in this study which, out of a number of possible compositions of their nearest neighbourhood, they would find most attractive. 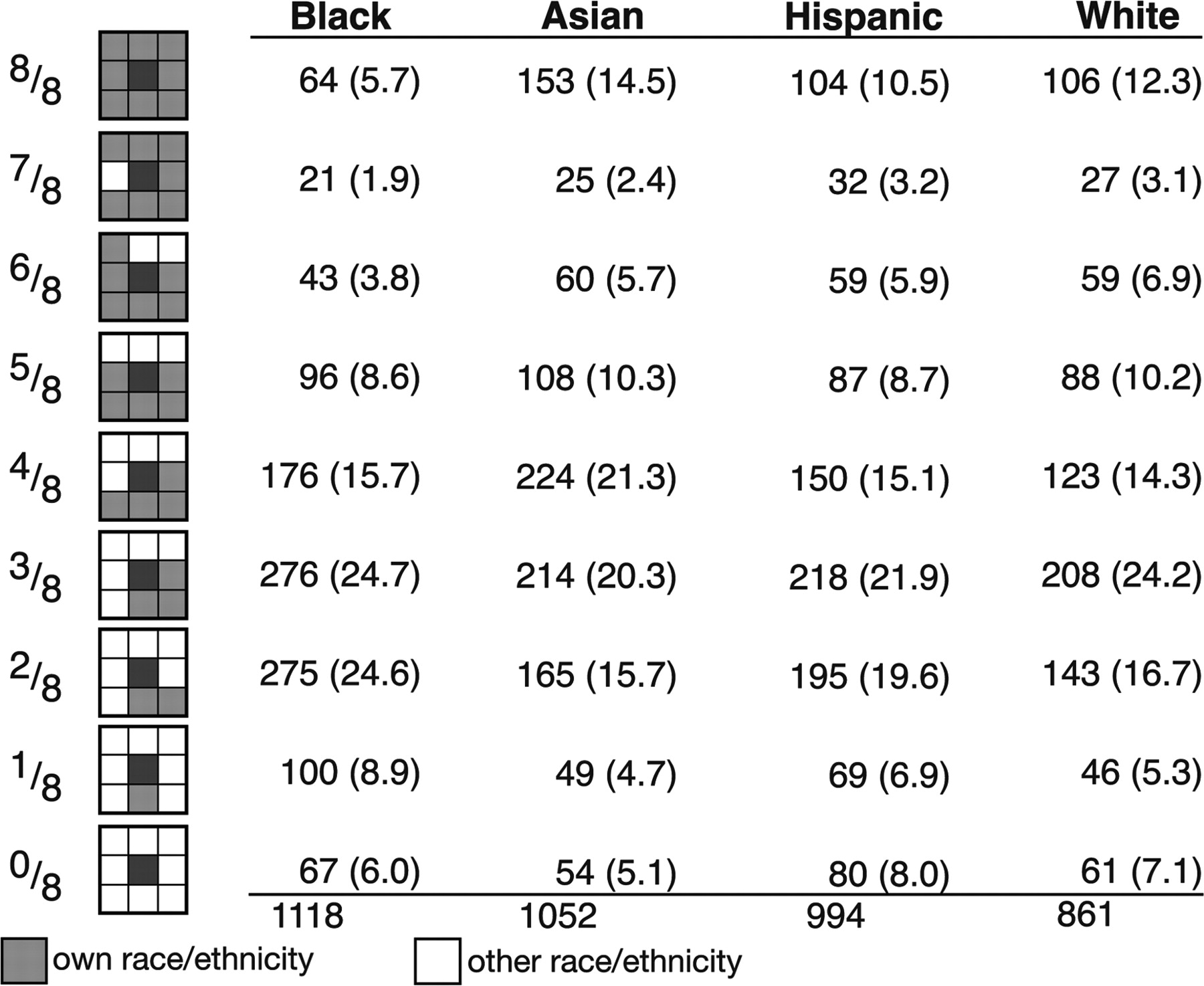 In the left column of the table you see possible neighbourhood scenarios depicted in a 3x3 neighbourhood with the respondent in the centre of this imaginary neighbourhood. In the next columns, we see the distribution of answers of the four major ethnic groups in Los Angeles: black, asian, hispanic and whites. Consider the answers of blacks: about 40% of them would like a neighbourhood in which they are in the majority, or nearly so. The point is: in the Los Angeles area much less than 50% of the population are actually black. So those 40% blacks who want to be in the majority cannot be satisfied in randomly mixed population. That is: if we would mix neighbourhoods randomly in Los Angeles, then a considerable fraction of the Black population would be dissatisfied with this mix. They would be likely to move out of their neighbourhoods, and again we would see a process of self-organized segregation, but this time based on the preferences of real people. To be sure, this is not different for any other ethnic group.

The researchers Fosset and Clark say based on these findings:“ The most common response sets for ideal neighbourhoods are in the range of majority or near majority same-group presence.” The problem is that in the real ethnic composition of Los Angeles, it is impossible that every group is nearly in the majority in every neighbourhood. As the researchers say: “Because no group expresses a preference for minority status, no conceivable neighbourhood ethnic mix can satisfy the preferences of all groups.”

You can read about these simulation studies in more detail in the article of Clark and Fosset (2008).

The most important result from these studies is that also in such, more realistic settings, Schelling’s unintended ethnic segregation is a very robust outcome. Here you see a picture of some of their simulations for a simplified scenario. In this set of simulations, there are three equally large groups (blue, red and green). 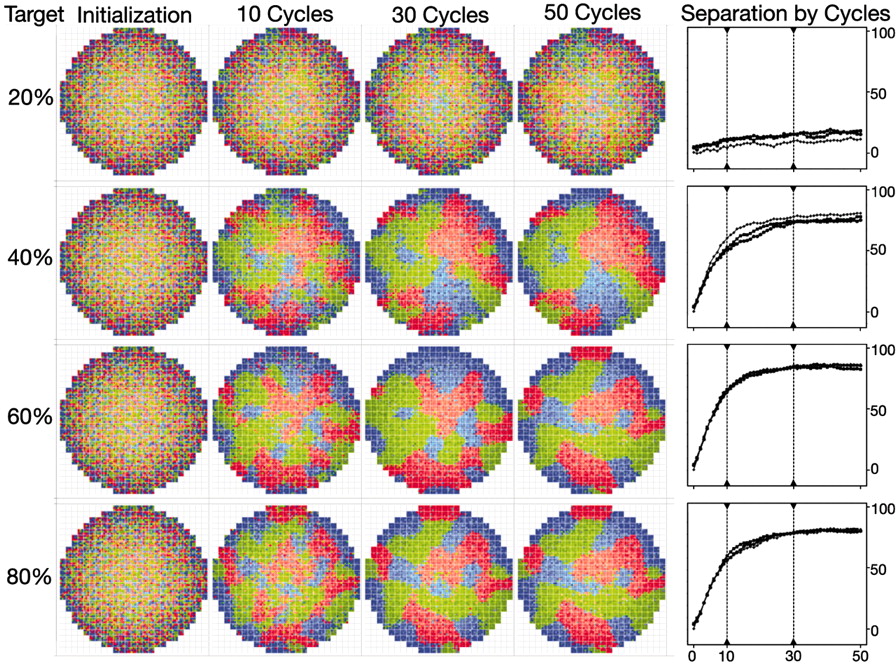 The researchers compared what happens when each group has a target rate of 20% alike neighbours, or 40%, or 60%, or 80%. For each scenario we see how the distribution of households changes over time, from left to right. In the rightmost column, we see how an index for the degree of segregation changes over time. As you can see, the most important conclusion is this: except for target rates as low as 20%, we always see how segregation increases over time up to a very high level. In most cases, much higher than what would be needed to satisfy the agents.

As the researchers observe: “ethnic segregation emerges quickly and stabilizes at high levels when preferences for same-group contact are similar to those documented in surveys.” So what can we conclude? Ethnic or racial segregation is a prevalent pattern in modern cities, one that can have undesirable consequences for society. Agent-based models of social self-organization show how this segregation can be the unexpected and also undesired result of the interactions of many individuals who only want to avoid one thing: end up being in a small minority in their neighbourhood. From research on the neighbourhood preferences of real people living in Los Angeles, we know that this is indeed an important factor in real life segregation patterns.

Once we know this, we can better assess whether we may need special strategies to prevent self-organized segregation and what their prospects of success can be. For example: could estate agents help prevent segregation by pointing people in particular to mixed neighbourhoods that the tenants would still find acceptable? Or could city councils avoid segregation by providing more affordable housing in wealthy areas, in order to attract ethnic groups with lower incomes? In the complex systems of modern cities it is hard to predict what exactly such measures would do. However, agent-based models of social self-organization can help us to get at least better understanding of possible and perhaps unexpected consequences of such policies.