This content is taken from the University of Groningen's online course, Decision Making in a Complex and Uncertain World. Join the course to learn more.
View course
6.20

The causation and effectuation approaches to entrepreneurship

Any one of you who ever did a course or read a book on management will recognise the main management activities as already recognised by Fayol around 1916; a manager has to plan, organise, lead, and control. In the strategic management literature, we can find a lot of tools and methods to investigate and analyse the company and its environment, which are all meant to help the organisation establish clear goals and develop the right plans to achieve these goals. In the entrepreneurship literature, the entrepreneurial process has long been presented in a similar fashion; entrepreneurs have an idea or a vision, and they go out doing market research, perhaps doing a SWOT analysis, then write their business plan, and ultimately establish and grow a successful company.

The last decade, many scholars have been beginning to realise that this rational, linear approach is actually not the whole story, and perhaps even only a small part of the entrepreneurial story. The most well-known academic representing this group of scholars is Saras Sarasvathy. Based on a study among 30 experienced entrepreneurs, she concluded that in reality entrepreneurs often behave differently and actually do not like this linear or ‘causal’ approach at all. They prefer to be more pragmatic and look for opportunities of employing their actual and limited resources (which include for example money, skills, relationships) in novel and creative ways, involving different stakeholders along the way, and ultimately developing some new product or service that creates value for their customers. Sarasvathy called this approach ‘effectuation’ and she illustrates it with an example of a chef cooking a meal.

Check out this video

“By using causation the client chooses a menu in advance and the chef prepares this menu by looking for the right ingredients and following the recipes to make the dishes. In the effectual process the approach would be rather different. The client would not ask for a specific menu, but he asks the chef to make something with the ingredients available. The chef chooses one of the many different meals he is able to make with the available ingredients.”

The following figures (source) illustrate these differences and the actual elements of the effectuation process. 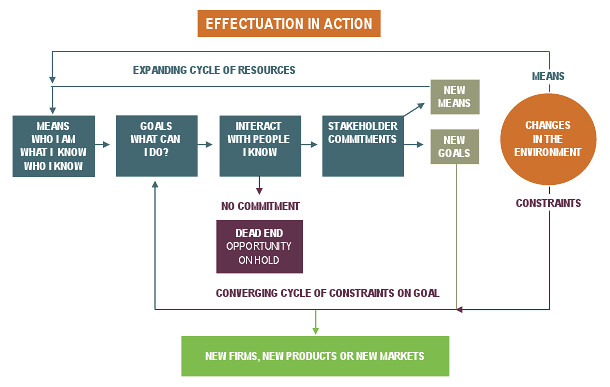 In modern literature, we see a debate among scholars about the applicability of the causation or effectuation approach. Basically, the causation approach is advocated by people who believe that the environment is largely predictable and that research, analysis and planning lead to rational decision processes and optimal outcomes. Some people also call this the ‘MBA’ approach. The effectuation approach (or similar ones, for example the ‘bricolage’ approach), is put forward by scholars stressing the uncertainty of the entrepreneurial environment in which the future is unpredictable and goals are not clearly known. Finally, recent empirical studies argue that in most organisations both causation and effectuation happen simultaneously. However, there is no agreement yet on under what circumstances which approach is more effective.