This content is taken from the The University of Melbourne & The Nossal Institute for Global Health's online course, COVID-19: Global Health Perspectives. Join the course to learn more.
View course
1.6

0:06Skip to 0 minutes and 6 seconds Hello, Angus Campbell here again. Still in lockdown. In this step, we will look at the course of COVID-19 outbreaks in several different countries and note some of the key features of the outbreak responses there

0:22Skip to 0 minutes and 22 seconds We are particularly interested in comparing the outbreaks to understand the efficacy of responses By the end of this step, you should have a greater understanding of the range of how the disease has emerged in different countries and be able to examine these features in other locations beyond the examples that we use here and think about what the different reporting formats of these data can tell us. For example, absolute numbers of cases reported compared to when we report cases per capita. In the next module, we will start to discuss the key elements of a disease outbreak response plan.

1:02Skip to 1 minute and 2 seconds So, make a note of some of the features that we have discussed in this step and off specific outbreaks as you observe them so that you can reflect of how they fit or reflect on how they fit into the general descriptions of ideal outbreak responses that we cover in week 2. Let’s start by looking at an animation from the Our World in Data website showing the total number of cases reported in selected countries from the start of 2020. I’ve chosen a range of lower, middle and higher income countries and ones that were affected at different times during the global course of the pandemic. Before we start, what sort of factors might you consider when we observe these data?

1:53Skip to 1 minute and 53 seconds An important factor in my mind is the size of the population in the country where the data are being reported. The significant, say of a thousand cases reported in China, with a population of 1.4 billion would, be dramatically different compared to say a 1,000 cases reported in Iran, with a population of 83 million, Italy or South Africa, each with populations of about 60 million people, or a 1,000 cases in Greece, which only has a population of 10 million people. Population of course, might also have big implications for how reliable those reported numbers are, depending on how quickly authorities became aware of that number of cases of disease in the wider population.

2:40Skip to 2 minutes and 40 seconds More about that in a minute, let’s run this animation.

2:46Skip to 2 minutes and 46 seconds Okay, so here we go. Here we see the potential challenge that likely face to run early in the pandemic. There’s a strong diplomatic and trade ties between Iran and Beijing so in early cases likely entered around and spread undetected, it might have been difficult to find them in such a populous nation. In contrast, Singapore, with a population of about 6 million also reported cases early in the pandemic their total case count stayed lower than South Korea, Italy and Iran, all of the populations about tenfold greater. No surprises there.

3:21Skip to 3 minutes and 21 seconds However, as of writing in early July, we can see that Singapore has reported a total of about 45,000 cases, which is disproportionately much greater than either of those other three countries given Singapore’s smaller population.

3:38Skip to 3 minutes and 38 seconds As an aside, you might be interested to read the thoughts of dr. Sallie Yea from La Trobe University in Melbourne, about what’s been happening recently in Singapore to lead to the spike in cases. To put this into perspective, let’s rerun the animation but look at cases reported now per capita with a scale of the number of confirmed cases per 1 million head of population. Let’s go. Now, we can see how great the relative severity of the outbreaks were in Italy in Iran as they quickly, wait and watch as these come up here, here they go, as they quickly climbed above China’s figures in March. More latterly, South Africa’s cases per capita have also continued to climb.

4:26Skip to 4 minutes and 26 seconds In contrast, China’s figures per capita are low. India, with a similar population to China, has reported cases at order of magnitude greater. So, which is the correct way to look at these statistics? I would say, that both are important. Just looking at the number of cases relative to the aggregated national population, will dilute, or the per capita figures, will dilute out the statistics if the disease is not uniformly present across the country, which is probably what’s going to be happening Big countries will tend to have better looking statistics, because the denominator in those per capita calculations is so large.

5:08Skip to 5 minutes and 8 seconds On the other hand, fixating on the absolute figures, those graphs that we had at the very start of the step, ignores the scale of the situation. Lots of cases though, could still be managed in a large country as long as it also has a large health infrastructure Now that the pandemic has been running for a while, another thing we should remember when we look at these figures, is that we’ve been looking at the cumulative numbers, the total number of cases reported throughout the whole course of disease to date. The figures reported more recently, will eventually become swamped by all the data from the preceding months.

5:45Skip to 5 minutes and 45 seconds So another thing we can look at, are the data counts of daily cases being reported. And we’ve got that here. With these two charts, the left graphs shows the total number of cases in absolute terms On the right, the chart is scaled in cases per million or cases per capita like the most recent animation we looked at. You can experiment directly with these graphs lower down on the webpage with an embedded link to the Our World in Data website. Note that now the x-axis is the number of days since some early indicator case benchmark was exceeded.

6:27Skip to 6 minutes and 27 seconds This lets us compare the intra country progress of the disease but it obscures the sequence by which different countries were affected as the global pandemic started to unfold. What do you notice about these two charts now that we’ve got them sitting side-by-side? Can you see the way the shape of the charts for a particular country is the same? You can see that China’s curve follows the same pattern on each of these two graphs. However, what’s different is the vertical location of the countries on the graph. This is the effect of scaling by national population So, what do you think will influence the daily reported case data in these views?

7:15Skip to 7 minutes and 15 seconds Early on, case reports might have been low if little testing was being done or if the data weren’t being aggregated and reported reliably. This harks back to some of the points that we raised in the previous step about the positive rate. So, now that we’ve looked at examples from a selection of countries, take some time to examine some data from other countries, from your local region or maybe from your area of interest. The charts used to generate the animations that I’ve used here, are embedded on the webpage below. I made the animations by dragging the time slides on the x axis, which you can do yourself to replicate what you saw here.

7:53Skip to 7 minutes and 53 seconds You can also animate the data but using bar graphs by pressing the play button in the first two charts lower left corners. Think about the sorts of features that could be contributing to changes in the shapes of these curves We’ll look at some examples of this in the next step and also relate your observations back to our previous discussion about what reporting or testing factors might be affecting the statistics as well as the actual disease itself.

In this mini-lecture, Dr Angus Campbell presents the COVID-19 case timelines for 13 different countries using the graphing tools from OurWorldInData.

We see that there is no one way to report and interpret data, and that taking a variety of views helps deepen our understanding. Looking at absolute case numbers helps us understand the total magnitude of the outbreak. However, this needs to be put into the perspective of the size of the jurisdiction represented by the data: a ‘big’ number of cases might be less concerning in a ‘big’ country – providing it has the resources to deal with it. Similarly, looking at how the outbreak varies over time is vital for understanding whether the disease is being managed adequately throughout the emergence, response and ongoing management phases of the outbreak. We use a series of example countries here but there are links to the data resources below, where you can view data from other countries in the different formats we present. 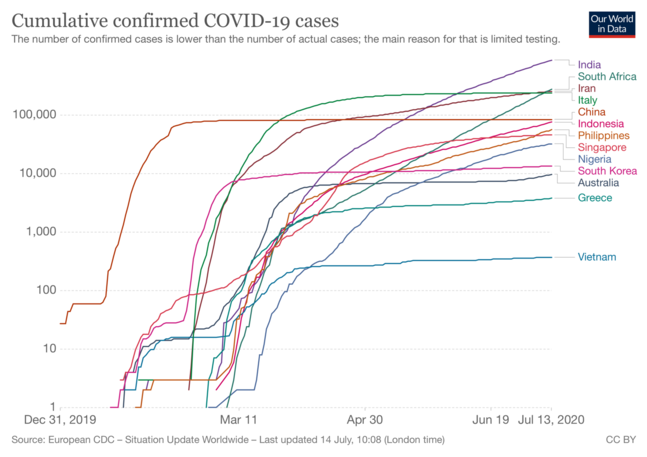 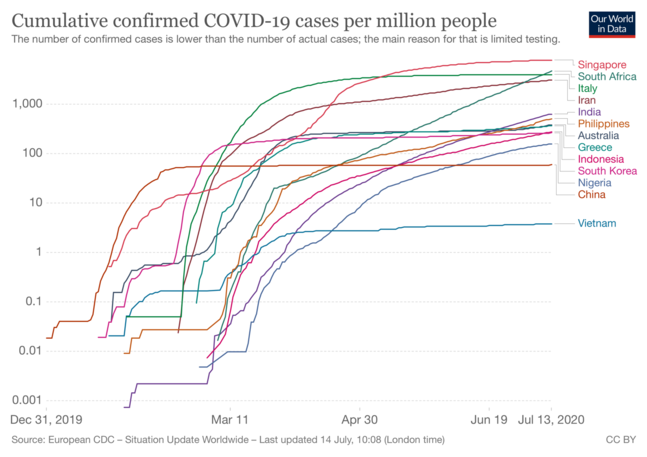 Learn how to plan a medical equipment donation to a low-resource setting that's appropriate, sustainable, and has a real impact.