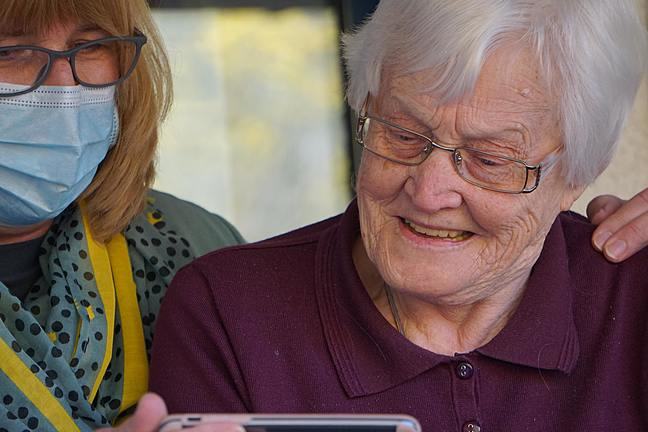 In this article Prof Judith Glynn, Prof Pablo Perel and Dr Enny Cruz from the London School of Hygiene & Tropical Medicine, together with Dr Emily Dobell from Public Health England describe the clinical characteristics of COVID-19, as well as individuals and groups at higher risk of severe disease.

When the virus gets into the nose and throat it enters cells that are found there using cell surface receptors called angiotensin- converting enzyme 2 (ACE2) receptors. Once inside cells it uses the cell’s machinery to multiply and spread. When the virus multiplies in the upper airways people are infectious i.e. they can transmit the infection.

The initial infection in the upper airways may give no symptoms at all, and some people do not then develop symptoms subsequently either (termed “asymptomatic”). It is still not clear how often asymptomatic infection occurs, which is one of the reasons why testing is important, to know how many people are or have been infected. Tests in people who were exposed to SARS-CoV-2, for example within households or on cruise ships, have shown that the percentage of asymptomatic ranged from 20% to 80%. It is probably more common to be asymptomatic at younger ages, and especially in children.

Alternatively, for symptomatic people, the infection may be accompanied by cough, fever, head and body aches, sore throat and loss of sense of smell. Studies from China show a range of reported symptoms (Figure 1). Some people have gut involvement giving diarrhoea. However, a symptom common in other respiratory viruses - a runny nose - is uncommon in COVID-19, with about 4% of people reporting this in one study from China. 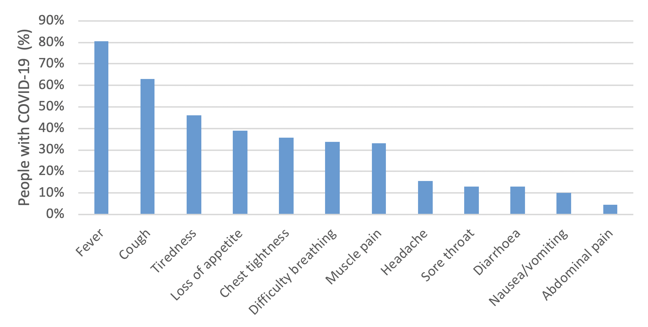 Figure 1: Percentage of people with COVID-19 reporting specific symptoms, in studies from China

In some people the infection may progress down into the lungs giving pneumonia. The body’s immune response causes inflammation in the lungs which reduces the amount of oxygen that can be absorbed, leaving the patient short of breath. Some patients recover on their own from this, some will need oxygen to tide them over until their body manages to deal with the virus, but some get much worse and develop acute respiratory distress syndrome (ARDS). In ARDS there is so much inflammation in the lungs that oxygen cannot get through. Artificial ventilation is usually needed and some patients will die.

Almost all other organs can also be affected, by the virus, or by the body’s response to it, in the small minority of patients with very severe disease. It can lead to blood clots and constriction (tightening) of blood vessels, which limit blood supply to organs. There can also be direct damage to the heart and kidneys. And some patients have had strokes or seizures or confusion with brain inflammation.

The ACE2 receptor is important in blood pressure regulation, and together with the inflammation and risk of clotting, explains the worse outcomes among those with pre-existing heart disease and high blood pressure.

Overall, data from China show that about 80% have mild to moderate disease and recover without any need for hospital care; 14% have severe disease; and 6% are critically unwell. These percentages vary depending on the population demographics, due to the increased risk of severe disease in older adults and those with underlying health conditions.

In all datasets deaths are very rare in children and young adults, but the proportion increases in older adults (Figure 2). Note that many mild cases may not be included in official statistics because they are never diagnosed, and some deaths are not recorded, particularly if they occur out of hospital and are never tested, so it is difficult to be sure of the true proportions. There have been reports in the UK that - although it seems extremely rare - children may get a severe inflammatory response - a very unusual response to the infection (also rarely seen in children triggered by other infections). 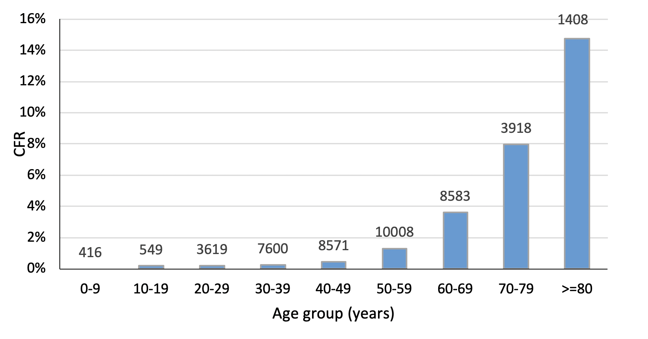 Figure 2: Case fatality rate (deaths/confirmed cases) for people with COVID-19, in studies from China (44672 confirmed cases). The numbers at the top of each column show the number of people in each age-group.

Worse outcomes have also been reported for men than for women (Figure 3). It seems that the increase in risk of dying with age and in men is only partially explained by underlying conditions associated with worse outcomes, such as obesity, diabetes, high blood pressure, heart disease, and chronic lung disease.

In the United States and the United Kingdom, cases and deaths also seem to be more common amongst those from black, Asian and minority ethnic (BAME) communities. This is probably a combination of increased exposure (a high proportion of the workforce in the health and care services in the UK, for example, come from the BAME community) and higher rates of underlying conditions. 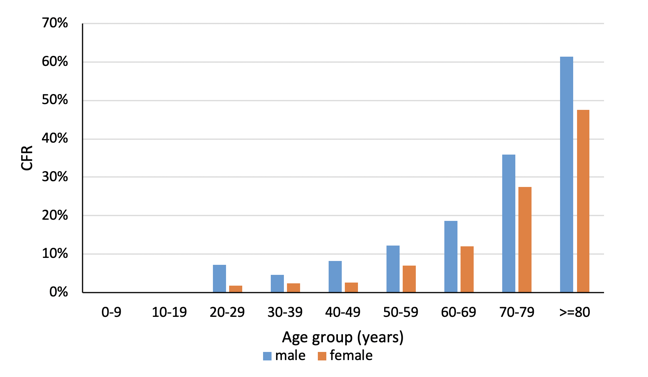 It is too early to know whether COVID-19 infection in the first trimester (first 3 months of pregnancy) leads to increased pregnancy loss or malformations. Other coronaviruses have not been shown to have this effect. There is also no clear evidence of an effect later in pregnancy. Case series describe a high proportion of preterm deliveries by caesarean section, but it is not clear if these were all necessary. Few recently born babies have been reported infected with the virus. The indirect effect of COVID-19 on maternal and neonatal health because of disruption of health services may be more important than any direct effect.