In this article Dr Ioannis Karagiannis, Field Epidemiologist for the UK Public Health Rapid Support Team, describes public health responses in Europe, including the experience of Sweden, Spain and Greece. As you read the article, consider the variation in restrictions that have been put in place in different countries – what factors do you think have influenced this?

Countries in Europe, as elsewhere, have attempted to contain the outbreak of COVID-19. However, many people with the virus travelled prior to travel restrictions, importing infections in-country (for details see the IATA link below) and case finding has been difficult because SARS-CoV-2 can be transmitted by pre-symptomatic, or asymptomatic individuals, as well as those with symptoms. 1, 2 In many countries there is or has been widespread transmission of the virus.

Many European countries have followed the example of China in mitigation, implementing population-wide measures to curb transmission, reduce the burden on health care, and prevent deaths. In addition, substantial fiscal and monetary packages have been put together to support those affected financially by the outbreak and/or interventions. The International Monetary Fund tracks global policy changes, for COVID-19 here.

Europe has a higher proportion of vulnerable individuals, compared to many other regions of the world, in terms of the age of country populations. As COVID-19 spread worldwide it was coming out of its winter season – which typically supports the spread of respiratory viruses such as influenza – and burden on health care was already high. The contribution of seasonality to transmission of SARS-CoV-2 is unclear.

European countries have had differing experiences of the outbreak to date, and their responses have varied. To illustrate this, we summarize the interventions of three European countries (Sweden, Spain and Greece) together with illustrations of cases and deaths. Figure 1 shows absolute measures - the total confirmed cases for these three countries, but this will be influenced both by testing, and by the total population in each country. Figure 2 shows relative measures of deaths and cases per million of the population in Europe, highlighting Spain, Sweden and Greece. As the number of cases in a country increases (per million population) the number of deaths increases approximately proportionally, albeit with some delay. 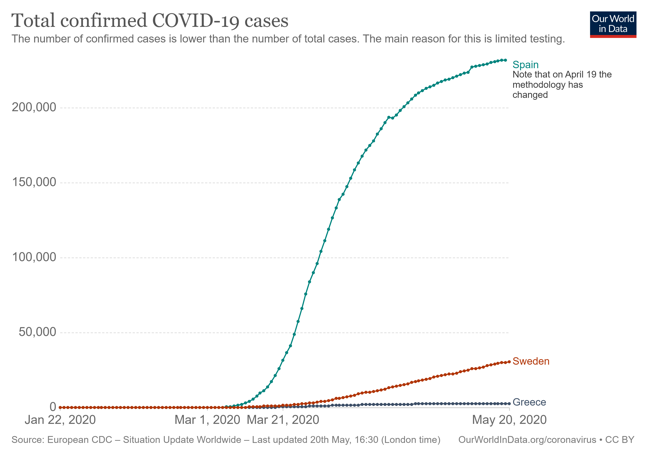 Figure 1: Confirmed COVID-19 cases in Spain, Sweden and Greece from ourworldindata.org. See here for up-do-date data and to look at other countries worldwide.

Examples of interventions in Greece, Sweden and Spain

Greece reported its first person with COVID-19 on 26th February 2020. Importations were identified from Italy, and in returning tourists from Israel and Egypt. In-country transmission subsequently became more widespread 4. The first measures by the Greek government included stopping carnival celebrations. Local measures were also imposed, including quarantine of a village in the west of Greece which had a cluster of confirmed cases. All schools and universities were closed on the 10th of March and all cafés, restaurants, museums, shopping centres, and sports facilities were closed on 13th March. Since the 23rd March, all non-essential travel has been restricted, a measure that started being eased in early May. Residents were asked to seek permission to leave their homes by texting a state-run number and await confirmation that they are allowed to go out until May 3rd. All forms of religious gatherings were also stopped. 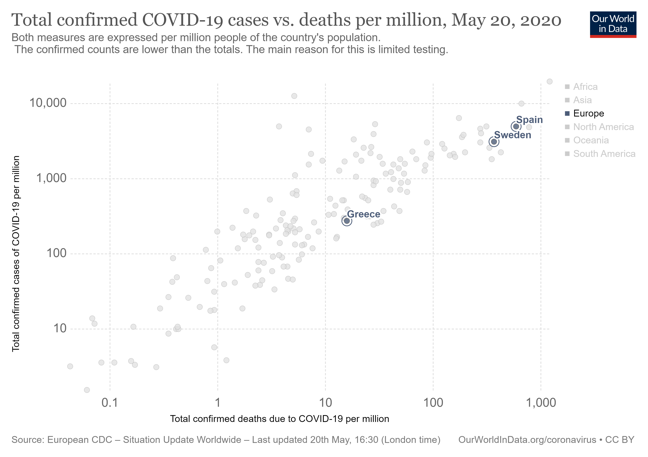 Figure 2: Confirmed COVID-19 cases per million against total deaths for Greece, Sweden and Spain from ourworldindata.org. See here for up-to-date data and to look at other countries worldwide.

Sweden reported its first person with COVID-19 on 31 January 2020 3. Folkhälsomyndigheten, the Public Health Agency of Sweden, and the Swedish government have recommended measures to promote physical distancing. People are encouraged to work from home if they can, avoid unnecessary travel within the country, and keep distance from others. People aged 70 years or more have been asked to stay at home as much as possible.

Spain’s first reported case was a tourist diagnosed on 31 January 2020, and there were multiple importations from different countries. Spain is one of the most affected countries up to now, with all-cause mortality increasing substantially between March and April 2020 - the observed number of deaths from all causes exceeded the expected number by more than 25,000 5. A national “state of alarm” was declared on the 13th March and population level restrictions were introduced on 15th March. Residents were permitted to leave homes to purchase food and medicines, work in essential sectors, or attend emergencies. Social areas, e.g. cafes, restaurants, bars, cinemas, gyms and shops have been closed. Some restrictions were lifted on the 13th April to allow more people to work; towards the end of April, children below 14 years of age were allowed to go out accompanied by one adult guardian, while since May 2nd all residents of Spain have been allowed to leave their home once a day at specific times.

The World Health Organization (WHO) recommends a risk assessment before the adoption of public health and social measures (PHSM), and/or lifting them which should assess the impact of adjustments, as well as the health care system’s ability to manage increases in caseload 6. Adjusting measures already in place should also be in line with the global strategy to respond to COVID-19 7.In line with their risk assessments, some countries are lifting interventions. Austria allowed some shops to open on 14 April 2020, ahead of schools and universities 8. Denmark allowed day-care centres and primary schools to reopen as well as hairdressers, tattooists and psychologists on 20 April 2020. Spain is considering reducing restrictions for children to help their mental and physical wellbeing, though no final decision has been taken at the time of writing. For further discussion on considerations for policy makers in lifting restrictions, see Step 3.3.