This content is taken from the University of York's online course, Engineering the Future: Creating the Amazing. Join the course to learn more.
View course
2.12 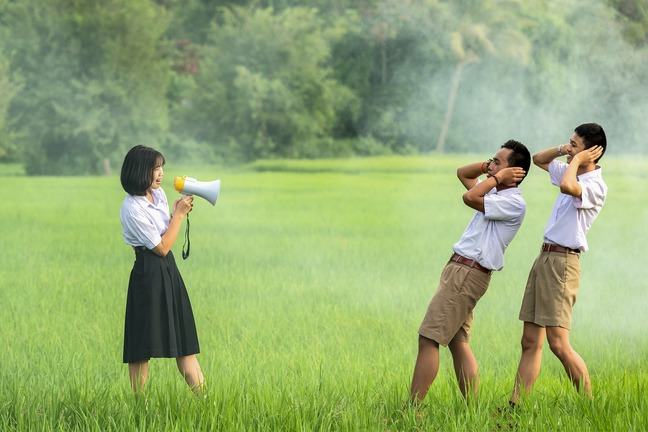 In How Environmental Noise is Measured we discussed how noise is largely characterised by measuring the Sound Pressure Level (SPL) and reporting this in decibels (dB).

Sound is a variation in pressure that is propagated as a wave through a medium. This can be any medium, but most of the time we think about sound as variations in air pressure, travelling through air. Of course, sound can also travel through solids, such as wood and metal, or liquids. The properties of the medium affect the speed at which sound travels; that’s why everything sounds slightly odd underwater for example.

A nice way of trying to visualise a sound wave travelling through air is to imagine that the air particles are represented by a chain of golf balls connected together by springs. If one of the golf balls is disturbed, this sets up a chain reaction - each ball in turn oscillates around its resting point (equilibrium position), and the disturbance is passed along the chain as a longitudinal wave.

It’s similar to the waves that sometimes happen in a crowd of people watching a sports event - a few people start the wave and it travels around the stadium, but the people themselves don’t move from their seating positions.

As the sound wave travels, regularly alternating areas of compression and rarefaction are set up. 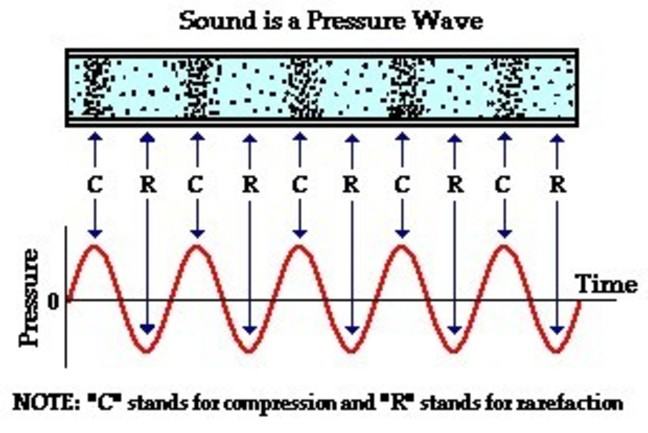 This means that if we capture the sound wave at one stationary point (e.g. the point where you put your noise level meter) we can plot the air pressure variations against time, as illustrated in the picture above.

Image Credits: Many thanks to Dan Russell for allowing us to use his fantastic acoustics animations. Dan works at Penn State University, USA, and has produced loads of really interesting animations about sound.

How do we measure sound amplitude?

We discovered in the previous video that measuring environmental noise involves taking an average level at one location over a fixed period of time. We need to do this by calculating the average level of the sound wave in a particular way called the root mean square (RMS).

If we just took a simple mean average, by adding up all the pressure values over time and then dividing by the number of values we had, the positive values would in effect cancel out the negative values and leave us with an average of zero. But that doesn’t make much sense for us as we are trying to capture the effective amplitude of a wave. Taking the root mean square (RMS) value produces a better measure of the amount of pressure variation in the sound wave. To do this we first square all the pressure values, which has the effect of making every value positive (so there are no longer any negatives cancelling out positives). Then we take the average of the squares, and then take the square root of that average. This gives us an average value that much better represents the amplitude of the sound wave.

Calculating the RMS pressure amplitude of a sound wave is fairly simple, but it turns out that the range of pressure levels that we might want to measure in the world can vary over a huge range because the human ear is incredibly sensitive.

The human ear can detect sound pressure levels that range between:

There are lots of different things that engineers and scientists measure on a logarithmic scale because of the large range of values they need to capture, such as:

Here are some common examples of approximate sound pressure levels in decibels which should give you a good idea of how sensitive, and incredible, human hearing really is.

Can you find any more examples of the dB levels of example sounds? Post them below.

Bear in mind that any noise above approximately 80dB can cause hearing loss. The risk of hearing loss depends on the sound pressure level of the sound and the amount of time you are exposed to it. Most countries have regulations about the level and length of time that workers are allowed to be exposed to noise in order to guard against hearing damage.

Can you find out what the regulations are in your country? Share your findings below.

Enhance your knowledge of metal additive manufacturing (AM) technology, as well as metal AM applications and materials.