This content is taken from the University of York's online course, Engineering the Future: Creating the Amazing. Join the course to learn more.
View course
3.3 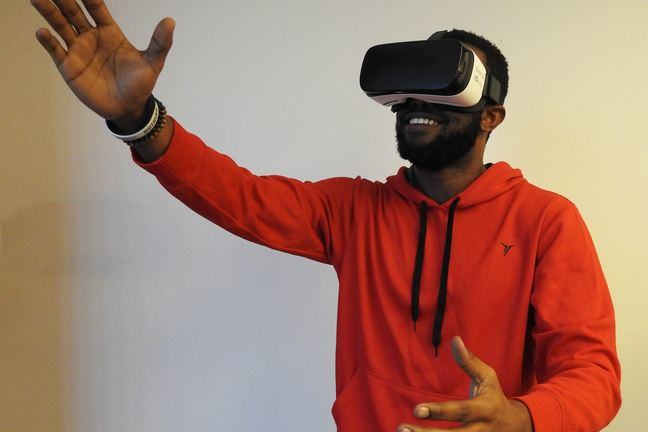 For a number of years the technology that allows us to immerse ourselves in artificial environments has been getting better and better. A key requirement for better immersion is better isolation from the real world.

Sound isolation has been achieved to a good extent via the use of noise cancelling headphones. But until now, visual isolation has been restricted to using dark rooms and relying on only one source of visual information. For example, the use of loud sounds and large screens in dark movie theaters improves immersion in the movie, compared to a small television or monitor screen in a well-lit room.

Virtual reality (VR) takes this technique to the next level by not only isolating our eyes, but also providing the illusion of stereoscopic depth through smart optics, in order to provide true immersion. In addition to fully experiencing the virtual environment, VR has the added advantage of interactivity, adding a whole new experiential dimension. Users can interact with virtual objects in the environment in a similar way as they would interact with real objects in life. Due to the digital nature of the virtual environment, it’s very easy to keep track of their interactions and change the virtual environment accordingly. This is the whole premise of video games.

But apart from the obvious applications in gaming, there is huge scope for immersive and interactive technology to be used in medical diagnosis and rehabilitation, leveraging ‘neuroplasticity’ - the amazing ability of the human brain to rewire itself to perform tasks that it couldn’t perform before because of damage to a certain part of the brain. When a person suffers a stroke, the blood supply to a part of the brain is reduced or interrupted, depriving brain tissue of oxygen and nutrients. Within minutes, brain cells begin to die, meaning that a stroke is a serious medical emergency. Stroke survivors often have difficulty moving, thinking and sensing. VR can be used with these patients to train the brain to rewire itself so that the functions taken care of by the damaged part of the brain can be compensated for by the existing healthy parts of the brain.

Conventional rehabilitation (rehab) therapy provide targets for the patient such as:

These are just a few examples, which help to improve the functional aspects of everyday life for people undergoing rehabilitation. The results of the rehab exercises are monitored by physiotherapists who assist patients during the recovery stage. The monitoring however, can be quite difficult to establish without quantitative measurements of task success. Currently, many clinical practices rely on the physiotherapist’s qualitative assessment of progress. The clinical nature and monotony of the exercises also means that patients get bored of repeating the exercises, which might mean they don’t do enough of them to aid recovery.

Including VR alongside conventional physiotherapy has had a significant positive impact on patient engagement in the exercises, and satisfaction with the outcomes. The effectiveness of any physiotherapy depends on continuous practice by the patient, and VR has improved the interest of patients in complying to the periodic physiotherapy appointments. Research studies have also identified a high degree of usability and immersion in VR, encouraging new clinical practices to centre their exercises around a VR-based system. The success of VR has inspired research towards the development of exercises specifically focusing on neurodegenerative diseases such as Parkinson’s or Huntington’s, and musculoskeletal disorders like osteoarthritis, leveraging on the immersive power of VR.