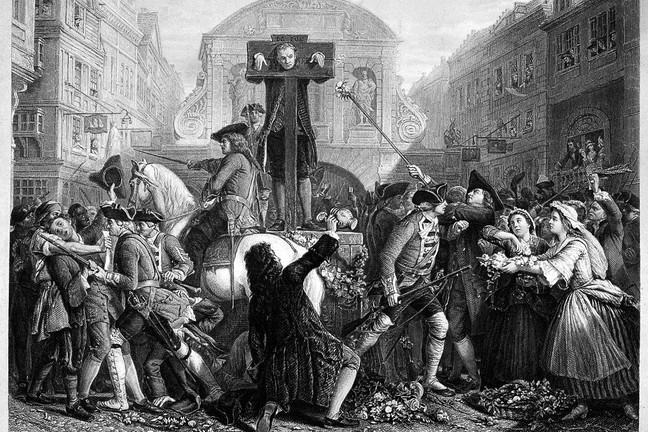 Defoe in the Pillory by James Charles Armytage (1862)

Although today we may automatically associate the prison with punishment, it needs to be recognised that in western societies this hasn’t always been the case. The birth of the prison as a distinct form of punishment and indeed as the ‘punishment of choice’ for more serious offences is generally put some time in the 18th century.

This is not to say that forms of imprisonment have not existed for a long time. After all, what image of a medieval castle could be more evocative than that of its dungeon, occupied perhaps by some wretch in fetters and chains?

Forms of captivity or isolation, however, were not thought of as constituting the punishment itself. Thus, a person might be imprisoned awaiting the gallows or imprisoned awaiting transportation to a penal colony. This type of imprisonment was a form of sequestration (taking legal possession of assets). Another example was the imprisonment of debtors who were held awaiting payment of the debt by their family or others.

If people were to be punished, then on the whole punishments were more physical in character. They included the pillory, stocks, whipping or the notorious gallows. Alternatively, people could be fined. But before the early 18th century there was not a clear idea of prisons as a place or site of punishment in its own right.

The shift from physical punishments to imprisonment was gradual and the prison was by no means the only model of containment and confinement developed during this period. The moral economy of Europe from the late 17th century right through to the 19th century saw a variety of closed spaces emerge for the sequestration of deviants of different stripes. The poor house, the work house and the house for ‘fallen’ women were just three.

In Paris, the Hôpital Salpêtrière held a large number of women – more than 6500 in 1790 – on a variety of grounds. Some had committed petty offences, others were interred due to their designation as being ‘morally abandoned’, while prior to 1789 another whole class were imprisoned under lettres de cachet, essentially orders by which a male could have a willful, unruly or troublesome wife or daughter imprisoned.

At this point, new forms of confinement stood alongside older and more brutal types of physical punishment. These, such as the pillory mentioned earlier, as well as the stocks and the gallows, were public punishments. They took place in market squares, often in carnival atmospheres and were targeted at the bodies of offenders. It was the pelting of an offender held in the pillory (a device locking head, arms and legs) with rotten food, or worse, that provided at once a form of popular entertainment whilst also a clear object lesson in the consequences of transgression.

Such festivals of punishment as these, which, in the case of the gallows, would conclude with the death of the condemned, were meant to illustrate the power of the state to take away life. This, after all, was the power of the sovereign writ large: the power to decide over life and death.

In England, the month of May 1723 saw the passage of what came to be known as the Black Act, a law that at a stroke rendered fifty often minor transgressions subject to the penalty of death. Over a few years, the number of capital offences multiplied to almost 250.

However the sheer scale of barbaric punishments, accompanied by rising crime rates, created instabilities: too many offenders were threatened with death; sometimes a crowd would side with the condemned; on the occasion of a botched hanging the crowd might threaten riot. By the close of the 18th century, therefore, punishments which focused on the maiming or destruction of the body were coming to be replaced by an ever greater reliance on its opposite. For where bodily punishments were public, graphic and increasingly politically risky, confinement, by contrast, would quietly remove the offender from society, hiding punishment rather than making it a spectacle.

Punishment was in this sense transformed from a public to a private event. Yet as the looming gothic architecture of the early prisons also made clear, there were things going on behind those prison walls that good hearted souls would not want to experience. Punishment, in this sense, had changed tactic but it had not diminished the power it wielded over the transgressor.