PLEASE NOTE: This course was retired on 2 Jan 2019. This means it is no longer being updated or maintained, so information within the course may no longer be accurate. FutureLearn accepts no liability for any loss or damage arising as a result of use or reliance on this information. 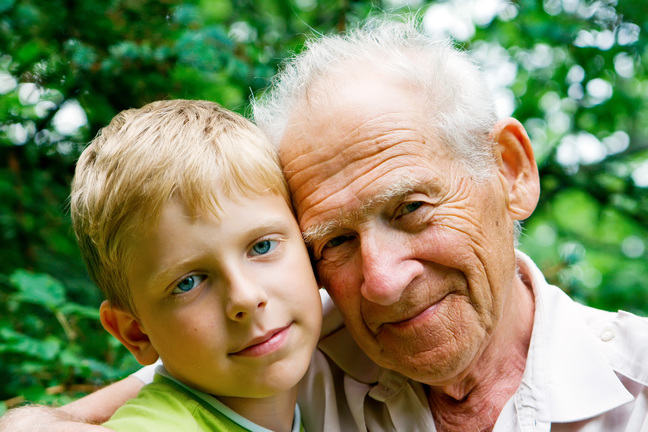 Peter and his Grandson

Over the next three weeks we will be exploring the issues raised in a case study about a man with dementia in a nursing home. Read the following biography carefully, and revisit it during the following weeks.

Peter is 85 and a resident in a nursing home, where he has been for two years. He likes to be called Peter, and does not like it when people shorten it to Pete.

Before retiring Peter was a college lecturer and he lived and worked in a large city for most of his life. After he retired he and his wife travelled a lot, visiting many European cities. They used to enjoy going to concerts, the theatre, the cinema and eating out. Peter also did some voluntary work with the National Trust as a guide showing people around Stately Homes and he would visit the local library most weeks to borrow books, CDs and DVDs. He was a member of a local walking group. He was a keen gardener and for many years had an allotment where he grew vegetables.

Peter was married for 50 years, with one daughter and two grandsons who he is very close to. Peter is an atheist, as was his wife. He and his wife were very dependent on each other and didn’t have a large group of friends. They were very happy and when his wife died 10 years ago, he was devastated. However, he continued with his hobbies, and found that the walking group and gardening helped him.

Peter was a man of regular habits and routines. He would wake up at 7:00 am, have a large mug of freshly brewed coffee (never instant), visit the toilet, shower, shave using a razor blade and foam, get dressed then go to the kitchen where he would have cereal or a boiled egg and toast for breakfast, with another mug of coffee. Peter liked peace and quiet in the morning, and it wouldn’t be until he’d had his second or third cup of coffee that he would have a conversation or listen to the radio. Lunch would be a sandwich or soup and his evening meal would be a pasta or rice dish with meat or fish and vegetables, accompanied by a glass or two of wine. As he grew older most evenings were spent watching television and he usually went to bed at around 10:30 pm.

Peter was in good health and apart from ‘getting old’, as he described it, there was little wrong with him. He has worn glasses since he was a child and his prescription hasn’t changed in the last 5 years. His hearing is good and he doesn’t wear dentures.