This content is taken from the University of Reading's online course, Understanding Depression and Low Mood in Young People. Join the course to learn more.
View course
4.9

How thinking can keep depression going

Emma had taken a really positive step in deciding to go to school. Despite this, she still found going to school very difficult and had a tough day. Her thoughts played a very important part in this. To understand how Emma’s thoughts affected her feelings and her behaviours, we’ll look at the questions from the previous discussion.

What are the key features of Emma’s thinking?

Emma’s thinking has some clear features of deliberate (slow) thinking. She made a clear decision to go to school in the morning. She was able to plan and organise things (her clothes, lunch) the night before and go to bed early.

Emma also had a lot of automatic (fast) thinking – especially when she went to bed.

Her thoughts were mainly negative and they went around and around – her thoughts were repetitive and didn’t really help her solve her problems. This kind of thinking is very common in depression and is known as ‘rumination’.

How does this affect Emma’s mood and behaviour?

Emma’s repetitive negative thoughts kept her awake, so she was tired and grumpy in the morning.

Her negative thoughts also made her feel low. Despite her plans and very good organisation, she thought that it would be better not to go to school at all.

What affect is this likely to have on her friends?

It’s hard to say. They might feel she is avoiding them because she doesn’t want to spend time with them and doesn’t like them any more. Or they might be worried and concerned about her.

Is it going to be easier or more difficult to go to school tomorrow?

Probably more difficult – some things might help, for example, an encouraging email from a friend which shows her that her friends do still care.

Take a look at the vicious cycle between Emma’s thoughts, feelings and behaviours when she’s lying in bed: 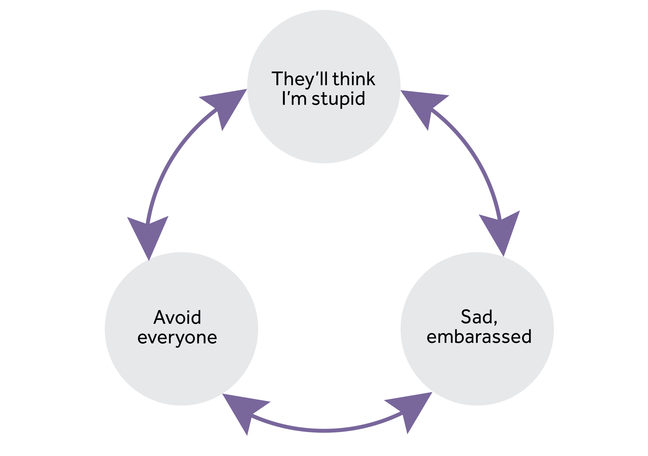 She predicts that people (her friends and her teachers) will think she’s stupid and this makes her feel even worse, sadder and embarrassed about how they will ‘see’ her. Because she can’t see another way to manage this, she decides her best option is to avoid people as much as possible and to try to make herself invisible at school.

As discussed in the previous Week, avoidance can be helpful in the short term but in the longer term it tends to make things worse. It’s possible that Emma’s friends will be puzzled by her behaviour and they may respond by leaving her alone, which she may think means that they are avoiding or rejecting her. Similarly, by avoiding her teachers, Emma may not have to answer questions in class but she also won’t be able to ask them for help – if they don’t know how she is feeling they may decide that she is being awkward, difficult, or lazy.

Last Week, we examined how this cycle can change by altering behaviour. Next, we’ll have a look at how catching and changing thoughts can also have an effect on this vicious cycle.