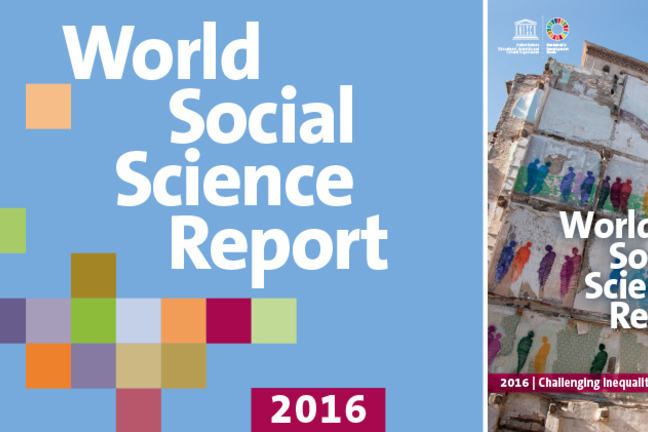 The extract that follows, taken from the World Social Science Report 2016, Challenging Inequalities: Pathways to a just world, presents some key ideas and reasons why inequalities are a principal focus of concern for governments, researchers, and society as a whole. The report, prepared by the International Social Science Council (ISSC) and the Institute for Development Studies (IDS), is published by UNESCO.

Various evaluations have concluded that in 2015, 1% of the world’s population controlled almost half of the total wealth commanded by all families on Earth. Moreover, the world’s 62 richest persons alone enjoy the same amount of assets as the poorest half of humanity.

The report concludes that inequality can put at risk the sustainability of economies, societies, and communities. It also argues that the creation of more equitable societies requires better understanding of inequality as a whole, and of the links between economic inequality and other forms of inequality, such as those generated by gender differentials or gaps in health and education.

The report also notes that very few countries currently invest in researching the potential long-term repercussions of inequality on economic, societal, and community sustainability; and that even in those that do so, this investment is insufficient. It therefore argues that more research is vital if we are to understand current trends in inequality and the best ways to combat them. Such research needs to be more interdisciplinary in nature, and to proceed from much more extensive international collaboration. The report calls on governments to bring to an end the systematic paucity of investment in social science research on inequality.

The report examines how interactions between seven dimensions of inequality come to shape the lives of individuals, creating a vicious circle of inequality. Inequalities cannot be identified and faced only from the perspective of income or wealth disparity, since they are political, social, cultural, environmental, territorial, and cognitive as well as economic in nature.

The World Report explores current trends in inequalities, an issue that has moved to the centre of research and policy design agendas. It assures us that the persistence – and in some cases, the increase – in levels of inequality is placing a question mark over the longevity of predominant models of economic development. Given this premise, it attempts to comprehend the impacts of inequality, going behind the statistics to identify what we might call vicious circles of inequality, where multiple and overlapping forms of inequalityexacerbate one anotherat all levels.

The report goes on to analyse the consequences of inequalities, establishing that the multiplicity of overlapping inequalities creates consequences that are likewise numerous, and interlinked. This overlap often makes it difficult to distinguish cause from effect.

Based on these discussions, the Report sets itself the task of identifying answers and pathways to transformation, attempting to imagine how the actions of governments, civil society, businesses and citizenry can be decisive.

In its final section the report places particular emphasis on the transformative potential of knowledge when placed at the service of a just world; and recognises the part that social science has long played in analysis of inequality. It however sounds a cautionary note in insisting that the urgency of the problem demands new types of research and knowledge, as well as sustained participation from the social sciences in the identification and construction of transformative pathways that lead to greater equality.

In Week 4 we will take another look at the World Social Science Report, this time with a focus on some of its key messages and strategic proposals. For now, we invite you to share your comments on the report’s proposals, if possible, reflecting on them in the light of your own experience and in dialogue with other participants. If you wish to study the report in more depth, the documents associated with this activity include the full text in English.