Curiosity, part of our DNA, is no different from our pursuit of food, water, or sex.

Our bodies are programmed to be curious and reward us when we exercise that curiosity. It is our body’s way of encouraging us to find new sources of food, new means of protecting ourselves, and new ways to aid us in times of crisis. 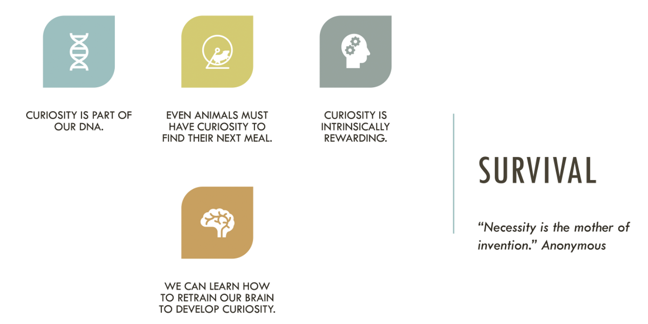 This deep, intrinsic force guides a curiosity that has caused scientists to refer to us as “informavores”, constantly seeking and digesting information. Even when our curiosity guides us on pursuits that appear to be a waste of time, our body finds a way to remind us that what we might not find useful today could be extremely useful tomorrow.

Psychologist Jean Piaget [1] says that we come into this world as tiny amateur scientists. From the first time we discover our own hands, we embark on a nonstop experiment to discover everything. This natural phenomenon aids in our survival in the searching of food and fending off threats and this perpetual search not only helps us survive but also serves as the beginnings of our emotional intelligence. By teaching us to form bonds with others and develop empathy, we learn to incorporate others into our survival efforts.

The founder of modern psychology, William James, explained that curiosity is an impulse toward better cognition [2], one that leads us to how we acquire knowledge through experience. When we are curious, our brain anticipates a reward, dopamine is released, and we gain a sense of well-being. Just as we gain a sense of reward from eating, sex, or winning the lottery, we get a rush from learning something new.

Endless subsequent studies have linked curiosity to our survival as a species. Neuroscientists Ethan Bromberg-Martin and Okihie Hikosaka were the first to discover this curiosity-dopamine reaction in their extensive research with monkeys.

Curiosity in a crisis

Professor Evan Polman from the University of Wisconsin demonstrated that our curiosity levels change as we encounter different situations [3]. Additionally, in a series of studies, Drs. Oliver Robins, James Demetre, and Jordan Litman demonstrated that, when confronted with a crisis, people are apt to be more curious. In fact, curiosity aids them in their efforts to cope with crises.

In stress and at other times, our curiosity can drive us to the extreme. In For the Time Being, Annie Dillard tells the story of British officer James Taylor, who in the 1930s was stationed in what is now Papua, New Guinea. With the aid of his military aircraft, Taylor made contact with people in a mountain village perched 3,000+ feet above sea level. 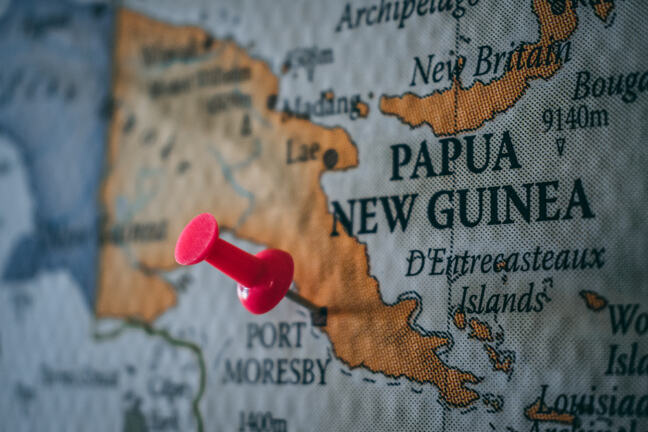 The villagers had never seen a trace of the outside world, much less an airplane. After spending time with the local tribe and completing his studies, Taylor made plans to depart. As he prepared to leave, one of the villagers, using vines cut from the jungle, tied himself to the fuselage of Taylor’s airplane shortly before it took off. The villager explained calmly to his loved ones that, no matter what happened to him, he had to see where this strange craft came from.

According to Rabbi David Wolpe of Sinai Temple in Los Angeles [4], that astonishing act of courage arises from a deep human need within all of us to understand, discover, explore, and follow the thread back to the beginning. “Living in the world is not enough,” he proclaimed. “We share a hunger to decipher its mysteries.”

Why did humankind travel to the moon? Why are our sights set on Mars?

We humans are deeply curious beings, and the more urgent the need to sustain our very survival, the more powerful our curiosity about the surroundings we occupy.

According to a study performed at Harvard University, Hemmelder and Blanchard [5] concluded that our economy, our society, and our very existence are strongly shaped by our drive to obtain information. They called humans “informavores,” creatures who search for and digest information just as carnivores hunt for and eat meat. Described from an evolutionary perspective, “There is a clear reason why we, like all animals, seek out information: it is vital to our survival and reproduction. A bird that spent its whole life eating berries from a single bush and never explored its environment could be missing out on a much better food source nearby. Thus, it is not surprising that exploration, hence curiosity, is common, if not universal in the animal world.”

These researchers further explained that monkeys, for example, will push a button at high rates of speed just for an opportunity to peek out of a window. They found that roundworms do not crawl to a food source directly. Rather, they circle toward it in a way that gives them the most information about their environment.

The researchers also described curiosity-driven behaviors in very young animals, even before they’ve had enough experience to learn the association between knowledge and rewards. For example, human newborns tend to stare at new visual scenes for a much longer time than they look at known visual scenes.

Animals tend to learn over the course of their lives that a greater knowledge of their environment leads to greater rewards, such as food or other essential resources. They are continuously in survival mode, asking, “Where’s my next meal coming from? How do I protect myself from predators? Where will I sleep tonight?” As a result, they are constantly curious. Even domesticated animals never lose that intrinsic curiosity. They may have it cushy today, but they never know if and when it will all end. Even pets that get all the creature comforts a human can provide are constantly on alert.

Information as a reward

Other studies have suggested that survival is at the root of the pursuit of information itself because it’s intrinsically rewarding. The reason primary rewards such as food and sex are pleasurable is that animals that enjoy eating and reproducing are more likely to survive and produce offspring. Evolution has therefore developed an internal reward system to drive behaviors that help animals acquire the resources they need. Could this same reward system be prompting information-seeking behavior in humans?

We have seen curiosity is key for our survival. Whether it is a bird that must explore new bushes for new sources of food or humans who explore space as a potential for expansion into the universe, all species adapt based on their curiosity.

But what happens to our curiosity as we get older? In the next step we delve into how curiosity changes with age.

2. James W. Talks to teachers on psychology, and to students on some of life’s ideals. New York, NY: Barnes & Noble Digital Library; 2011.