Fear, the first and most prominent of the four factors of FATE, is fully capable of blocking our curiosity, our pursuit of innovation, and our competitive advantage. 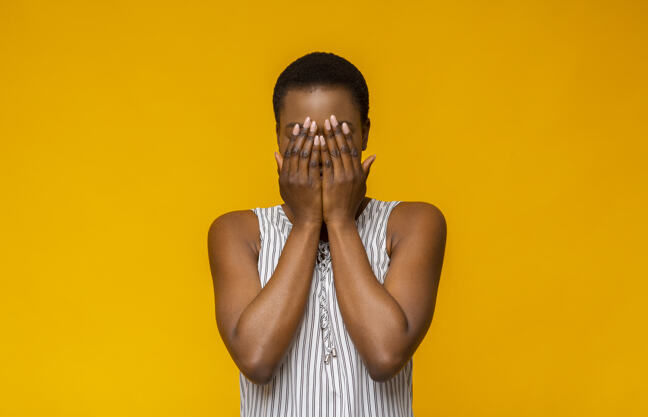 Fear takes many different forms: dislikes, biases, opinions, and even bravado. But don’t be confused; each of these is a variation of fear, and each can bring us to a paralyzing halt. That “deer in the headlights” sensation affects more than just deer.

A part of our brain, the amygdala, signals any signs of threat or danger we may encounter. Such detection triggers the release into our bodies of large doses of chemicals such as adrenaline and cortisol. While this function is essential to our survival, the amygdala has no ability to distinguish a real threat from an imaginary one. It doesn’t know if we’ve confronted a bear or misplaced our iPhone. As Jason Ma [1], founder, CEO, and chief mentor of ThreeEQ, said when he was on my show, “It just knows our thought was negative, which provokes a fight-or-flight reaction within us.”

For example, your amygdala remembers and stores in your brain the reaction you experienced in the third grade when you failed to answer the teacher’s question. It remembers how your colleagues looked at you when you made an off-the-wall suggestion, and it reminds you that the last time you attempted a three-point shot at the buzzer you missed.

Whereas your amygdala may be essential in warning you that spiders and snakes can be a threat, it can also put a damper on your curiosity and desire to explore new things.

The only thing we have to fear is fear itself. Franklin D. Roosevelt [2] 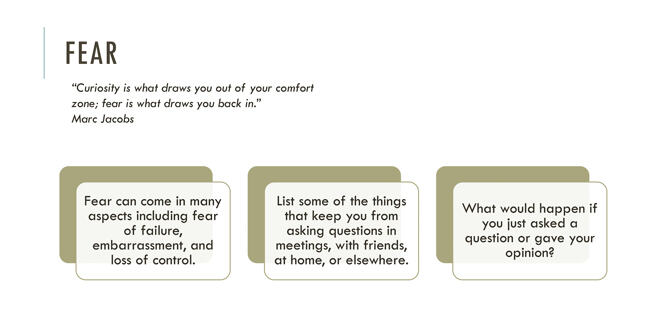 Fear, at its core, is a reluctance to delve into the unknown. The reasons for that can range from the sublimely ridiculous to the deadly serious. They include fear of failure, fear of making life-altering mistakes, fear of looking stupid or ignorant, and even fear of re-experiencing something negative from our childhood.

To this day, I resist certain vegetables because as a child I found them to be disgusting. The script in my head goes something like this, “I ate cooked carrots as a kid and remember them tasting mushy and nasty; hence, I no longer want to try new vegetables.” If you asked if I’d be interested in learning a new way to cook carrots, I must confess the answer would most likely be no.

Sally Helgesen [3], a noted consultant and author of The Female Vision, noted recently on my show, “A big fear that women, especially, share is that you’ll disappoint the expectations people have of you and that they’ll say, ‘That’s so unlike her.’”

The fact is, any fear, however ridiculous it seems, is completely capable of impeding our curiosity and innovation. Fortunately, most of our fears aren’t an impenetrable wall but are often like fragile panes of glass that can be shattered or overcome with a single action.

The term “fear” is defined as being overly cautious or reluctant to act to avoid consequences.

In many instances, our fears are imaginary, something we anticipate could happen or might happen as opposed to what likely will happen. Insurance companies hire actuarial analysts to calculate the risks and probabilities of potential threats or occurrences. If something seems too risky, we tend to shy away from it.

Behavioral scientists and leadership coaches suggest the opposite. They encourage us to move toward the risk, not shy away. They remind us that a key difference between exceptional leaders and others is their high comfort level with delving into the unknown, exploring the uncomfortable.

Fear, in evolution, has a special prominence: perhaps more than any other emotion, it is crucial for survival.

Recently, I was swimming laps at my gym. By the side of the pool was a woman with her toddler. As small children tend to do, the child kept tugging at her mom to go toward the pool, only to be held back by her protective mother.

Eventually, the mother decided to let the child experience the water. Jumping in, she extended her arms to the child, urging her to jump. Repeatedly, the child excitedly ran up to the edge of the pool, but each time, she stopped just short of leaping into her mother’s arms. After several aborted attempts, the exasperated mother got out of the pool and led her daughter away.

The infant was clearly curious to experience the sensation of being in the water, but her fear of the unknown overcame her curiosity.

How many times have we, too, been curious to experience something unknown or to explore a new opportunity yet were too fearful of what might result if we followed through?

Generally, we don’t fear physical harm, but rather we fear the risk of other kinds of discomfort.

Jay Samit, a leading Hollywood media executive, author of the book Disrupt You [4], and one of my favourite TED speakers, draws the distinction between fear of failing and fear of failure.

Fear of failing, he explained, means giving up; whereas fear of failure is more about learning how it won’t work. Failing is worse because it means you give up. Failure means you have found a way that something didn’t work, and you’ll continue to seek new ways.

It seems we live in a time of extreme scrutiny and judgment. Just ask people how much they care about how many “likes” they get on social media. If someone writes a critical comment about us online, we can be devastated. Perhaps we see what other people do on their social media sites and think we can’t compete with them, so why try? The reality is that most people post only the very best aspects of their lives online. If we try to compete with that, we’re setting ourselves up for failure.

Don’t let the noise of others’ opinions drown out your own inner voice.

To determine if fear is holding you back from discovering areas you might otherwise want to explore, ask yourself exactly what you fear. Is it the process or the outcome? Do you not believe you’re capable of doing a particular task or job? Do you need more information to make a decision? What’s at stake if you make a decision?

If you’re considering writing a book, do you fear having it scrutinized or judged? What if you consider doing something but are told it’s risky or scary? Would you accept this input at face value or explore what you want to do anyway?

What if you tried something and failed? Do you think you would look bad from someone else’s viewpoint? Are you worried about being overwhelmed with too much to do? Or worried you’d be putting all your eggs into one basket?

Our fear of failure tends to grind off our enthusiasm for risk taking and for entrepreneurship. We should be more in touch with what we get from our failures.

Consider how you would deal with your answers to the questions above.

Share any answers in the comments section below and respond to your fellow peers!

Perhaps once you answer them, whatever is holding you back will become clearer, and you can address solving that problem directly.