This content is taken from the University of Exeter's online course, Genomic Medicine: Transforming Patient Care in Diabetes. Join the course to learn more.
View course
1.10

What is the prevalence of diabetes?

In this step we will consider the wider problem of diabetes increasing across the world. 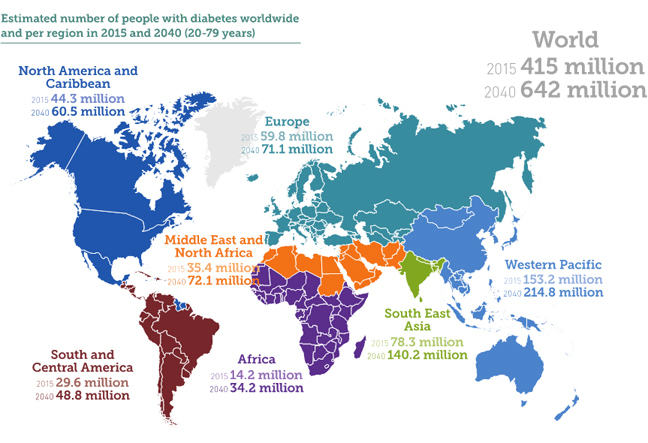 According to the International Diabetes Federation (IDF):

The estimated diabetes prevalence for adults between the ages of 20 and 79 worldwide for 2015 was 415 million and it is expected to affect 642 million people by 2040. It is estimated that 193 million people globally have undiagnosed diabetes, and most of these cases are Type 2.

The IDF estimated that in 2015, six countries had more than 10 million people with diabetes: China, India, the United States of America, Brazil, the Russian Federation and Mexico. Diabetes affects people in both urban and rural settings worldwide, with 269.7 million cases in urban areas and 145.1 million in rural areas.

Type 2 diabetes is the most prevalent form of diabetes and has increased alongside cultural and societal changes. In high-income countries up to 91% of adults with the disease have type 2 diabetes. It is estimated by IDF that 193 million people with diabetes are undiagnosed and are therefore more at risk of developing complications.

One in 15 adults is estimated to have impaired glucose tolerance, and one in seven births is affected by gestational diabetes. Both of these conditions are associated with an increased risk of developing type 2 diabetes in later life.

Whilst Type 1 diabetes is less common, it is still increasing by around 3% every year, particularly among children.

If you’re interested in finding out more, you may wish to look at the International Diabetes Federation (IDF) Diabetes Atlas (7th Edition). An updated 9th edition, from 2019, is also available here.

Does anything surprise you about these figures? Discuss this data with your fellow learners, thinking about about the 2015 figures and the forecasted figures for 2040.