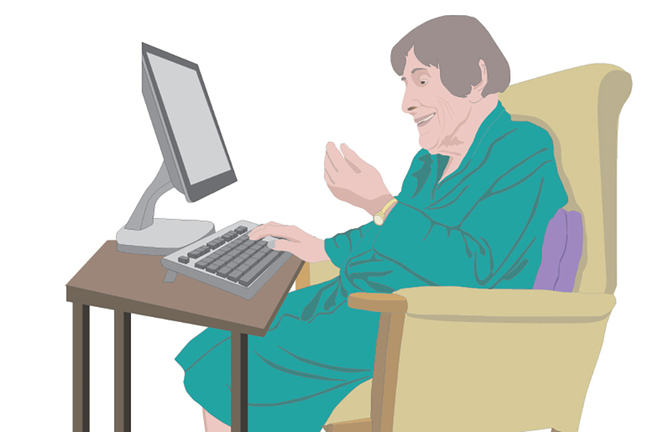 © This image is created by the University of Southampton and licensed under CC-BY 4.0 International Licence

Meet Monika who is elderly

Monika is an 83-year-old widow who lives alone in an apartment in the Western suburbs of Stuttgart, Germany. She has 3 children and 6 grandchildren. She is fairly active and uses public transport to visit friends and members of her church. Unfortunately, her vision is gradually declining, due to an age-related macular degeneration.

A day in the life of Monika

Monika has a three-year-old computer donated by her son. She had never used one before and is afraid of “breaking” it. Her son set it up with Skype, an e-mail client and a Web browser.

Occasionally, she chats with her daughter-in-law over Skype and sees her newest grandson on the screen. Before the Skype call, her daughter-in-law calls her on the phone to tell her to start the computer so that she has Skype running. Monika rarely likes to sit in front of the machine preferring her large screen television, although she doesn’t like to admit she cannot use all the features on the remote control.

Her bank closed two months ago, leaving an ATM (cash machine) in place which she finds confusing. Now she needs to travel to the city, or try online banking. She has heard about the risks of online banking and is afraid of doing something wrong.

She had a look at the online banking application with her son and was scared by the many menu items and complex procedures. Her son even helped her to get a list of transaction authentication numbers (TANs) from her bank, so she would be able to initiate wire transfers. She was cross with herself that she couldn’t do it alone, but wanted to avoid doing something stupid!

Monika loves to travel, and has booked a week-long bus trip to Tuscany (Italy). However, she no longer travels alone, not just because she likes to share the experiences, but because she is afraid of forgetting instructions, failing to cope with new technology and getting lost when she misses signs or doesn’t understand the language.

Sadly, Monika has also recently noticed that it is harder for her to read the ticket machine displays at the S-Bahn (metro) station. She copes with the bold letters and headings, but has trouble reading the smaller font used for the list of stations. It would have been so much easier with black text on white and she is now finding the low levels of contrast on the small screens is also causing problems with her devices at home.

Her hearing is still fairly good, but she has trouble following conversations in a noisy room, especially when lots of people talk at the same time. On the phone she sometimes has a hard time understanding the other person, especially if it is a child or a woman with a high voice. Once she missed an appointment with her daughter because she didn’t hear the time. Now her daughter confirms the date and time of appointments via e-mail after a telephone call.

Can you think of any other technological challenges that Monika might face in daily life?

© This text is a derivative of a work by Stuttgart Media University and licensed under CC-BY 4.0 International Licence adapted and used by the University of Southampton. Erasmus + MOOCs for Accessibility Partnership.

Focus on and plan your personal development as a manager with this online course from The Open University and CMI.