This content is taken from the University of Southampton & MOOCAP's online course, Digital Accessibility: Enabling Participation in the Information Society. Join the course to learn more.
View course 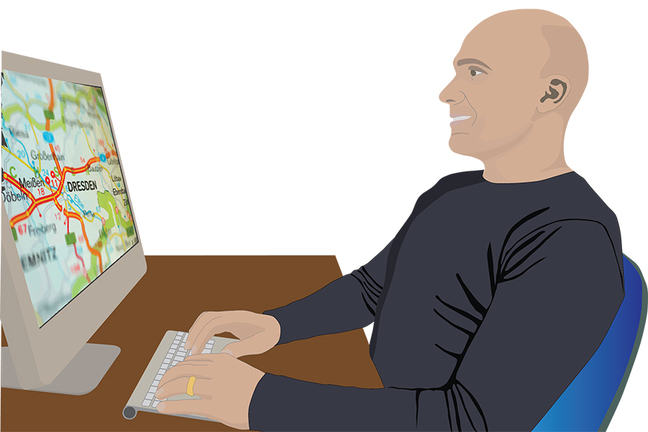 Alexander is 36 and lives in Dresden in Germany and works in the Deutsche Bank. Alex has minor vision problems; he cannot distinguish red and green colours, like 10% of the male population. Some people confuse this condition with achromatopsia (full colour blindness), which is actually very rare.

A day in the life of Alexander

At university, Alex had problems with some of the lecture materials, mostly when they contained graphs with colour-coded legends. Classes on statistics often used line charts and Alex was often unable to figure out the difference between lines describing the evolution of the net profit of several companies. The same problem occurred with bar charts, where the bars were only distinguishable by colour and not by different textures.

Alex now works as a loan manager and is very successful. Whereas as a student he was dependent on public transport and had trouble reading coloured metro network maps, he now drives his own car.

He no longer needs to ask for help as he has satellite navigation in his car that can be controlled through speech recognition and the system reads out the route.

Traffic lights pose no problems as long as there isn’t too much sunshine and his smartphone has colour filters that help with map reading and other colour dependent systems.

Today, Alex returns home from work later than usual. At work, he had some charts about the pension funds they are managing. Peter, his co-worker, had put red and green sectors adjacent to each other. Alex accidentally mixed them up because the data were described by colour only.

As a result, the presentation he prepared based on the data drew incorrect conclusions. He was lucky that Peter checked the slides but it took another 3 hours to rewrite the text and get additional images to support the new conclusions.

Challenge 2: coping when colour symbols are not offered alongside recognised alternatives

At the weekend, Alex enjoys watching Dynamo Dresden playing football, this month they are playing against Werder Bremen. Alex is not sure if he should buy tickets for the game: Werder Bremen’s green home colours make the players hard to distinguish from Dresden’s with its red away colours.

At other times Alex likes to hike with his girlfriend Tina. The trails around Dresden are all marked with many spectacular views, but when he downloads the maps (in case he loses connection on his smartphone) he usually finds they have red and green markings without explanations or different shapes, so they all appear similar and the signs along the way are the same. Tina has become a good guide!

Can you think of any other technological challenges that Alexander might face in daily life?

© This text is a derivative of a work created by Technische Universität Dresden, and licensed under CC-BY BY 4.0 International Licence adapted and used by the University of Southampton. Erasmus + MOOCs for Accessibility Partnership.