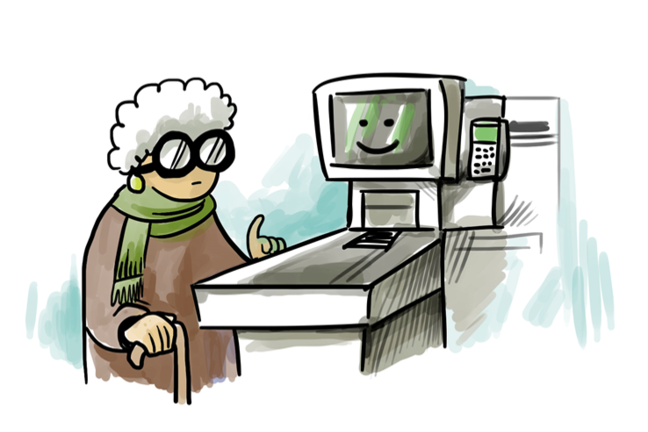 There are two main ways to deal with the problems of inaccessibility in everyday technologies. Both are necessary:

1. Do not try to re-invent the wheel

Instead, make use of the large amount of recommendations, such as standards and guidelines which encapsulate much accessibility knowledge and give high level principles as well as step by step techniques to follow.

Involve a wide range of potential users when you are designing and developing something. Their feedback is invaluable, as it will not just be for their reactions. Potential users can ‘co-create’ using participatory design methods, and offer insights that can be very significant.

It is rare that something is created that is so specialised that it cannot be used by others. Remember Jan Blüher, in step 3.11, who developed an application for people who were blind, but then discovered it was useful for people who have colour vision problems.

It is also important to be aware that increasingly there are laws passed to protect the rights of people with disabilities.

There have been some cases that have made headlines and forced changes in practice as ‘offenders’ not only faced financial penalties but also the ‘bad press’ of being inaccessible. For instance, W3C’s article on ‘A Cautionary Tale of Inaccessibility: Target Corporation’.

Enforcement backed by legislation is advocated by people who are frustrated to see that accessibility solutions in one area, for instance ‘talking ATMs’ in the U.S., have not necessarily meant accessible self-service check-in kiosks at the airport, or non-visual interfaces for domestic appliances.

The National Federation of the Blind in the United States have mounted a campaign The Home Appliance Accessibility Act: seeking sponsorship in 2012 for legislation on domestic appliances. Several organisations such as the Policy Department on Citizens’ Rights and Constitutional Affairs and the European Disability Forum, have made recommendations that the proposed EU Accessibility Act should also include household appliances.

Do you know of any positive effects of accessibility legislation being applied to everyday technologies? What more do you think could be done?

© This image is created by The University of the Aegean and licensed under CC-BY BY 4.0 International Licence. Erasmus + MOOCs for Accessibility Partnership.

© This text is a derivative of a work created by The University of the Aegean, and licensed under CC-BY BY 4.0 International Licence adapted and used by the University of Southampton. Erasmus + MOOCs for Accessibility Partnership.