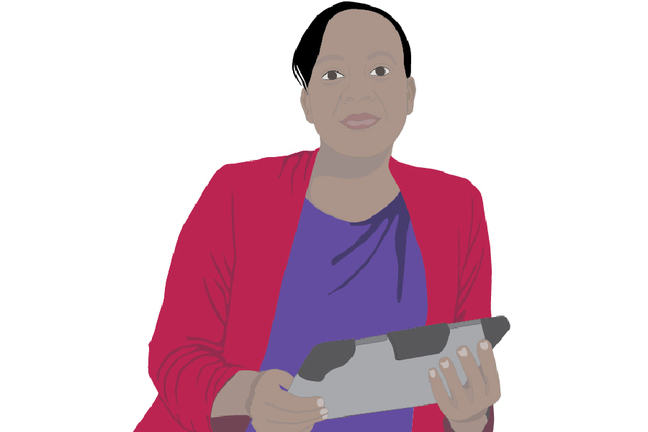 Meet Susan who has a hearing impairment

Susan has a hearing impairment and wears hearing aids in both ears. The hearing aids amplify sounds, especially those with higher frequencies which affect her ability to pick up certain speech and environmental sounds.

A day in the life of Susan

Susan wakes up to an alarm clock that has a vibrating pad under her pillow as she cannot hear an ordinary alarm without her hearing aids in place. She also has a flashing light that alerts her to the fact that someone is ringing the doorbell or landline phone ringing or the smoke alarm has gone off. Thankfully the light flashes in a different way depending on the device that has been activated!

Susan has read about a new system that uses QR codes or RFID tags on her front door sending a message to her smartphone. The downside of the system is that it requires visitors to use their smartphone rather than pressing the doorbell but on the other hand it would allow people to communicate with her when they are at her door, even if she was not at home!

Challenge 1: finding programmes or recordings with captions or transcripts

While eating breakfast, Susan turns on the television with the subtitles switched on to check the morning news. She also looks at the news on her tablet computer but can only read the brief summaries because not all the video clips have captions. She can’t follow the radio news in the car on the way to work and feels left out when friends tell her about interesting programs and she has not been able to find transcripts.

Even with her hearing aids, Susan can’t hear very quiet and higher frequency sounds, so she sometimes misses the sounds of nature like birds singing and the rustle of the wind in the leaves. She finds it very difficult to hear in noisy restaurants and pubs, and therefore tends to avoid such situations; her hearing aids amplify the background noise so much she has to turn the gain down and so cannot hear a person who wants to talk to her.

Challenge 2: making the most of speech recognition technologies and the internet

At work, Susan uses a text relay service for making business phone calls, although she prefers to text or e-mail using her smartphone. When face to face with people at work in a quiet place she can understand the conversation quite well. She usually relies on her hearing aids and lip-reading, but she sometimes tries to use speech recognition on her smartphone recording what people are saying to her and reading the text output. However, in larger meetings it can be difficult to quickly identify who is talking and Susan often misses parts of the discussion especially when she can’t see the person’s face and mouth. In these situations a remote captioning system can be useful where the other person’s speech is captures via a microphone, sent across the internet to a transcriber who converts the speech to text (by typing or by speaking the words into a speech recognition system), which is then sent back to Susan’s tablet with a few seconds’ delay.

In an important one to one conversation where she must check all that is being said carefully, Susan can also use a keyboard with a second screen for people to type messages to her. Her own speech is very intelligible, so she only types back when talking to another hearing-impaired person.

At the end of the day, Susan enjoys going to the cinema to watch films, but finds it frustrating that she needs to choose from the few dates and times when captions are shown. She has heard of a new app that shows captions on her mobile phone during the film. Hopefully, the cinema will get the necessary equipment soon. Even better would be glasses showing captions, because reading the text on a smartphone while watching a film is not very engaging or relaxing.

Can you think of any other technological challenges that Susan might face in daily life?