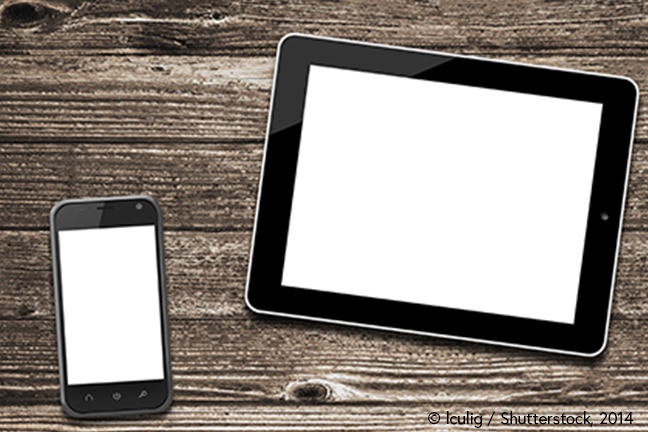 How consumers use devices

In this article by Tom, he argues that the Internet, the World Wide Web and the numerous technologies that surround them are no longer unconventional.

They are conventional, and an important tool in the armory of any marketing professional.

What is clear however, is that they should be treated with respect, in the context of both the objectives of the organisation, the preferences of the consumer that the organisation wants to do business with and in light of the dangers or risks that they also present.

Think about the following quotation:

‘Consider a future device for individual use, which is a sort of mechanized private file and library. It needs a name, and, to coin one at random, “Memex” will do. A memex is a device in which an individual stores all his books, records, and communications, and which is mechanized so that it may be consulted with exceeding speed and flexibility. It is an enlarged intimate supplement of his memory’ Vannevar Bush, 1945

When I read this, I think of my phone or iPad, however this was written in an academic journal decades before the reality of those devices.

What is it that makes you become immersed in your device?

Now think of the ‘intimacy’ you have with those devices and consider a concept called ‘flow’ that describes an almost addictive state of mind in which you are so immersed in a particular activity that you a less aware of your surroundings. It might be that you start watching a film and then realise that the room is dark and you haven’t turned the lights on, as you usually would do.

Now consider your mobile devices, most of you are likely to have one. What made you decide to choose that model? Do you know?

In basic terms consider and try if possible to explain ‘what is special?’ about your device. This is likely to come from its use / context / form factor / interface etc.

This can then be further developed in terms of ‘Goal Directed’ and ‘Non Directed’ use and the movement between the two. Once you verbalise what is special you should be able to map the experiential factors and consequences of that immersion in the device such as Learning, Exploratory Behaviour and Positive emotions etc. It is almost worth you drawing those experiences on (dare I say it) a piece of paper.

Some of these factors may be considered rather basic, ‘It’s a phone, I call people’. That may sound obvious but is it really a phone? Is the phone really that important or is it about text, social etc.

The providers may like us to think so but then they do charge us generally by call time, sms texts and data, rather than the actual services or apps we use.

Some of these factors may be considered more valuable than we realise on first inspection. Reading, Shopping, watching YouTube, even learning. 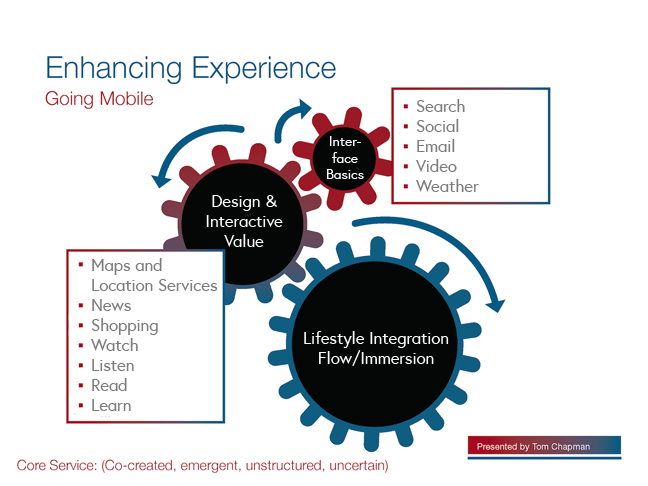 If you and importantly organisations and developers can identify the causality of these positive experiences then this should feedback to interface design and future tablet versions etc.

Obviously, the greater the ‘flow‘ or immersion, the greater the cognitive absorption, resulting in a perception of increased usefulness, ease of use, word of mouth referral and technology acceptance.

Context and awareness links the design process in terms of the physical, sensual, cognitive, emotional and aesthetic. This should follow on to create an experience that differentiates your device and that can be articulated through the physical product, the user and the interaction between the two.

In my opinion various drivers for mobile devices can be seen below. 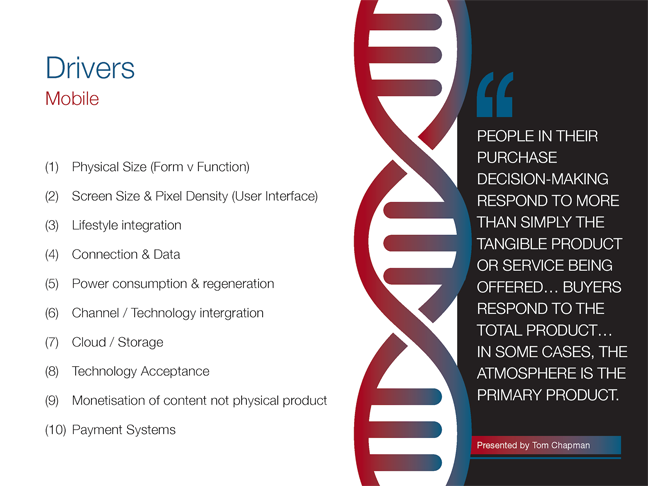 Specific research extends the findings of internet research to mobile through the consideration of both the ‘mobile setting’ - time, place, context and any device constraints of which size is an obvious one.

There is quite a lot of information surrounding form factor (7 inch v 10 inch tablets etc). Much of this relates to our own experiences and the limitations of the human eye. Without boring you with the maths or the history of architecture or photography, the form factor, pixel density of screen and viewing distance are pretty much as follows.

Form factor is based on what we have experienced, hence, the screen ratio of tablets, largely 4:3 or 16:9 may well come from monitors and TV screens. We have come to accept them as familiar.

Viewing distance is normally anywhere between 1.5 - 2x the diagonal screen size in inches. It is linked to the degree of view most comfortable for our eyes and area of focus. So a 7 inch screen is best-viewed 10.5 - 14 inches away and a 10inch screen is best-viewed 15 - 20 inches away. Just consider the size of the device and its relative merits to place mats on a dinner table or standard paper sizes.

The resolution and pixel density is determined by the human eyes’ ability to determine contrast. As you probably know, we don’t see shapes we see the contrast between light and dark that our brain then interprets as shape. Based on a normal average 20/20 vision a person can determine ‘1 arc minute’ of detail. It is linked to the screen of letters we all look at when we go for an eye test. It essentially creates a constant value of 3438 that we can use to determine the pixel density.

The other thing to consider of course is that we are not all the same. Young people (generally) are able to focus at closer distances than older people. The general rule of thumb prior to the advent of the iPhone but still widely accepted is that a comfortable viewing distance for a normal person (not a young person who texts and walks at same time) is anywhere between 300mm and 500mm or 11.8in to 19.7in accounting for length of arm and eyesight.

Both the 7 and 10 inch form factor fall within these parameters but the older the person the larger screen is better, the more mobile the person wants the device to be the smaller is better. Everything is a compromise.

The trick is to know the profile of potential customers and identify the best mobile context for its intended use, the cause of ‘flow’.