They are fundamental to the way we perceive and understand the world around us.

When we want to have something explained to us, we might ask ‘What’s the story?’.

So that is where we will begin.

But first, let’s conduct a little experiment. Can you see the white triangle? 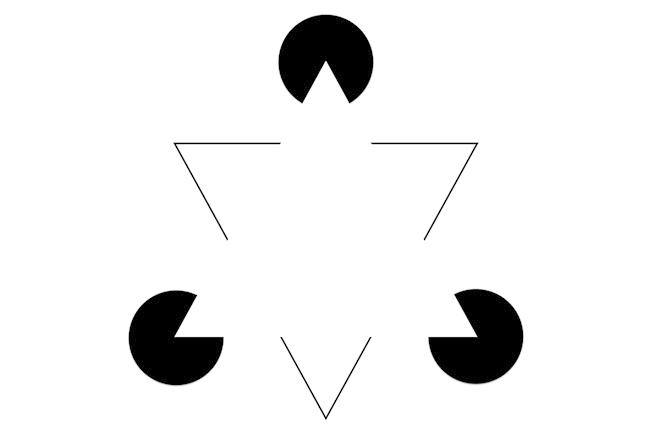 Of course you can. Everybody sees the white triangle. Except it’s not really there. What you actually see are six black shapes that merely infer the shape of two triangles - our brains generate a whole image from that partial data.

This image is known as the Kanizsa triangle, first described in 1955 by Italian psychologist Gaetano Kanizsa, and by now you’re probably wondering what it has to do with storytelling. In a sense, the white triangle is a story, a way for us to make sense of the world - which is what stories really are.

We perceive the white triangle because of how human perception works - the brain tends to ignore gaps and perceive the edges, known as illusory contours, in order to make the image appear as a cohesive whole. The human mind is a pattern-recognising, meaning-making machine - when we have partial information, which is pretty much all the time, our mind fills in the blanks in order to construct a holistic reality.

The white triangle shows that, in some sense, as humans we’re actually hard-wired to perceive and understand the world through stories. We take bits of information and arrange them into something coherent that we can understand, assigning causality to things as we do so. Have a look at this video as an example: Heider-Simmell Experiment.

It’s not surprising that stories surround us; from the news we consume, the films we watch and the books we read, to our conversations, interactions and interior monologues, stories play a central role in defining what it is to be human.

It’s worth pointing out that the Kanizsa triangle also tells us something else about human perception and the way we understand the world through stories - we can’t always trust our senses to give us an accurate picture of the real world.

We might all be able to agree that the triangle is there, but its existence is contingent on shared inferences based on available data, not complete evidence. The story it tells is compelling, but not necessarily ‘real’ or ‘true’. In fact, it suggests that we need to think critically about what we even mean by a ‘real’ or ‘true’ story.

So, if this is the case for human perception, what happens to our understanding of ‘real’ or ‘true’ stories when we use filmmaking to tell them? What are we to make of the dictum that ‘the camera never lies?’

In the following steps we’ll start to ask some questions about the nature of stories, such as what makes a good story. We’ll offer some insight into different ways we can read and analyse stories, some pointers about structuring them, and some tips on other aspects of narrative technique.

By the end of this week you can begin to answer the big question: what’s the story?

Discover the essentials of video game development and learn how you can start your own programming career.