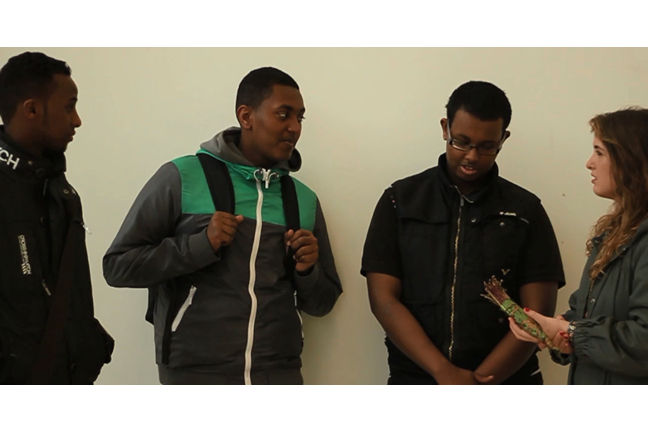 You have watched Khat and will have a growing sense now of how the director has created an engaging narrative which takes us on a journey of exploration.

This journey teaches us about the culture of chewing Khat in Sheffield and we hear first hand about views on the activity from a range of individuals.

You’ll also have been thinking about how the meaning of the short film might operate on a range of levels and in different ways for a variety of viewers. The critical analysis of the film that follows will provide one set of responses to some of the questions asked in the last step to sharpen or supplement your own.

Ibrahim Ahmed, the director of the film, has aimed to keep the text as ‘open’ as possible. In other words, he deliberately presents different sides to his story so as to resist channelling the viewer’s experience into a single fixed point of view. In this way, the dominant or preferred reading of the film could be seen as fairly loose.

In deliberately soliciting opinions on Khat-chewing from a relatively diverse range of people, the film could be seen to try to speak from and to a wider sense of community.

This intent could also be recognised by the use of a white woman as interviewer.

This role has been kept fairly nominal but performs the important function of eliciting content for the documentary. There will be more on interviewing modes in Week 3 and increasing diversity amongst the main characters.

The film begins with a static camera panning from one medium close up to another as three individuals speak about Khat: the focus moving in and out, with associated but brief blurring as it does so. The tone of the film is established at once as intimate, natural, raw and revealing. In this way, in embarking on the narrative in such human terms, the director connects the viewer immediately and even viscerally into the story.

The time-lapse sequence that follows is visually engaging and narratively significant. We’ve just learnt that the practice of chewing Khat has been going on for thousands of years. The filmic technique cleverly visualises the passing of time. It superimposes the sense of a long past with a fast-moving present. What this also does, however, is avoid noting that the social practice is very much a culturally located one.

The film avoids such specifics (bar the naming of Sheffield) but it also seeks to evade judgement - moving from positives (Khat ‘motivates’, ‘keeps you happy’) to negatives (‘the community that use it most, is the one that is destroyed’). In this way, again the director has tried to create an ‘open’ narrative which encourages the viewer to entertain various opinions rather than fix upon one.

Please share your thoughts in the comments area on the following question: