The interview is a commonplace audio-visual construct that comes in many forms. The press junket, pavement vox pop, formal interview, informal conversation and more.

The interview offers a way for the filmmaker to engage directly with the individual. It is a way to tell the story, or least a part of it, ‘straight from the horse’s mouth’.

We’re all very familiar with the televisual ‘talking head’, the voice of an expert offering their considered opinion. Indeed, interviews are usually used so that they contribute meaningfully to the construction of the film’s argument. So it is important that we try to understand them in a little more depth.

To do this, we’ll look at a few particular ideas:

Each of these should help to develop your understanding of the ethical, intellectual and even aesthetic implications of conducting interviews.

In practical terms we might think of the participants in a non-fiction film as contributors, and this is the term that you are most likely to encounter in the film and television industries. However, in more theoretical terms we can also conceive of any individuals or people involved as social actors, which is not to suggest that they are trained and directed like professional actors, but rather

‘to stress the degree to which individuals represent themselves to others’ and to remind us that such people ‘retain the capacity to act within the historical arena where they perform.’1

In short, contributors, including interviewees, are real people who live in the historical world, but to some degree their ‘realness’ can be construed as a performance.

News anchors talk directly to us, as do all manner of other television presenters, hosts, correspondents, politicians and pundits. Direct address has also found a happy home online, with the rise of the vlog (video blog) on platforms such as YouTube. Vloggers look straight down the camera lens and speak to their audiences directly, creating a face-to-face relationship between them and the viewer.

In fiction filmmaking, direct address is much rarer. It is known as ‘breaking the fourth wall’. Using direct address in drama is almost taboo in a number of forms and genres, and is most likely to emerge in a comedy film, either as a knowing look or line, or as part of a more elaborate ‘mock-umentary’ style.

Documentary filmmaker Errol Morris has even used direct address as part of his interview technique. He designed a special interview set-up known as the ‘Interrotron’. The ‘Interrotron’ is essentially a modified teleprompter which projected an image of Morris onto a glass plate in front of the camera, enabling the interviewee to look him in the eye whilst also looking directly down the lens. 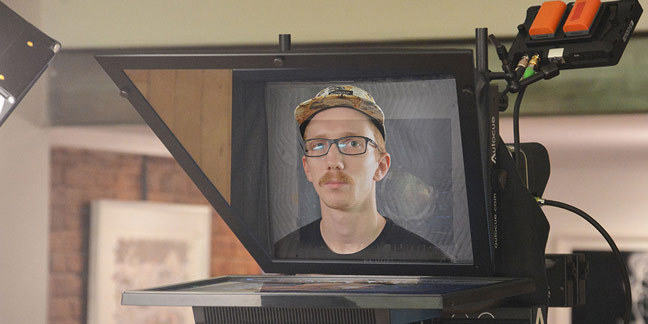 It created a face-to-face relationship that is at once more intimate and more confrontational than a ‘standard’ interview format in which the interviewee looks just off camera at the interviewer.

By using this technique, Morris is manipulating the power relationship that is at work in any interview between interviewee (in front of the camera) and interviewer (usually behind the camera), in order to enable eye contact between the interviewee and the audience. It is eye contact that lies behind all uses of direct address because it is such an important facet of human communication - when we talk to people we look them in the eye, we read their expressions for cues and extra meaning.

Film theorist Bill Nichols developed a typology of documentary film using ‘modes of representation’, which he defines as

‘basic ways of organizing texts in relation to certain recurrent features or conventions’.2

We can think of these modes as sub-genres of a very broad documentary genre, one of which is the interactive mode. In later elaborations of the typology, Nichols uses the term ‘participatory’ instead of interactive, one of six modes that also include poetic, expository, observational, reflexive and performative.3

It is the interactive mode that interests us most here because:

‘Interaction often revolves around the form known as the interview. This form raises ethical questions of its own: interviews are a form of hierarchical discourse deriving from the unequal distribution of power, as in the confessional and the interrogation. How is the inherently hierarchical structure of the form handled?’4

If, as Nichols suggests, the power relationship in an interview is always unequal, then this places an extra emphasis on the filmmaker to consider the ethical and intellectual implications of any interviews they conduct, and the style, tone and techniques they will employ.

It is worth noting that Nichols’ work is just one of several typologies of documentary film that are available. The idea of different ‘modes of representation’ is certainly very useful in helping us to categorise and analyse non-fiction filmmaking (and, at times, fiction films too), but individual films are very rarely confined to a single mode. There are also other analytical approaches and methods of categorisation that might be more useful in the study of particular films or genres. The following are some questions to help you reflect on this article, please share your thoughts in the comments area.

Why should a designer learn to code? Find out with the University of Michigan and build your skills in design computing.