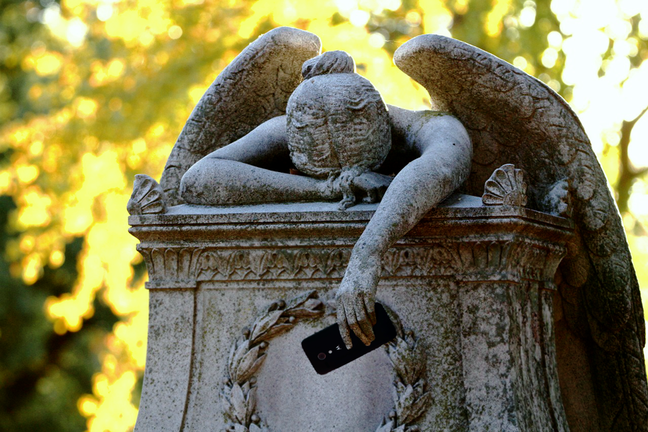 Whilst the physical reality in modern western society may be for minimal public display around death, social media has increased the visibility of mourning.

This is most obvious in the mass online outpourings following any high-profile death: floods of tweets and status updates from public and private individuals alike. Such deaths have always elicited a social response: political and religious figures have been known to draw huge crowds for their funerals, be it through spectacle or pilgrimage. And it is an inevitable consequence of celebrity that we note, and perhaps even keenly feel, the death of the famous, especially where their works have effected us emotionally: the novelist Victor Hugo attracted a crowd of two million to his funeral in 1885. Large-scale outpourings of grief are not exclusively a phenomenon of the internet age.

But the published nature of social media, combined with its confessional quality, has created a new kind of visible and quantifiable grief. It’s become a black joke of Twitter that when you see a celebrity’s name ‘trending’ it is probably because they’ve just died. Some celebrities have even died multiple times: one mistakenly belated #RIP can easily snowball into a second wave as happened with the broadcaster Tony Hart six years after his first demise.

The influence of digital technology extends to the funeral itself. Television brought the funerals of particularly high-profile public figures into our living-rooms, but online rolling news can now do the same for lesser celebrities. The 2018 funeral service of comedy performer Barry Chuckle was a public event of sufficient scale to warrant the use of a football stadium (not unprecedented for a northern comedian: wartime radio star Tommy Handley got huge crowds for his funeral in 1949, and Dustin Gee’s service in 1986 had an attendance of 300). But it could also be followed in live updates on the BBC News website, including footage of one of his brothers wiping away tears as he carried the coffin. The coverage intended no disrespect – it was rather seen as part of the normal reporting of a celebrity death.

Another digital development has been the rise of online memorials, often in the form of a social media page such as the deceased’s Facebook wall. Such virtual memorials can democratise grief: anyone, regardless of geography, can share memories and condolences. This does leave these pages vulnerable to trolling, and the ability of strangers to leave public messages of grief or support can be resented by close family and friends, whilst a lack of awareness around privacy settings allows very personal messages of grief to be seen by total strangers.

When a Facebook page becomes a virtual memorial, at what point is it acceptable to unfriend the deceased? It may seem heartless, but if you’re being barraged by updates, or even just receiving the odd “memory”, it may prolong pain and inhibit moving on.

It’s been noted that as well as messages of support and condolences for the bereaved, there is a tendency for posts or messages to be addressed to the deceased, as if cyberspace will connect the mourner with the beyond. Again, there’s nothing new about addressing the dead, but an academic survey of MySpace memorials showed that almost all messages were directed at the deceased rather than the bereaved or other mourners. The same study also highlighted the potential transience of social media platforms. What happens as social media moves on? MySpace memorials now seem like relics, and one day they won’t be there at all, though the same could be said of stone.

The internet has its uses beyond the memorial. Online groups (often via WhatsApp or Facebook) or forums can offer a closed community of grief, creating a virtual space in which to mourn. They can be a valuable source of support for the terminally ill, loved ones, and the bereaved, alleviating isolation and enabling sharing of experiences in a controlled environment at a difficult time. The demographic sting is that older adults are the most likely to experience bereavement but the least likely to use social media so may miss out on the digital support available.

Western society has often shied away from public displays of grief, but such grief can be a meaningful part of the healing process. Our discomfort can stem not only form the personal revelations of pain and loss, but also a reluctance to discuss our own mortality. Whilst the online memorial culture may not be without problem, it may be helping to re-normalise death and dying in a society that is typically happy to represent most aspects of life, but is so often reluctant to explore its end.

Tony Walter (2015), New mourners, old mourners: online memorial culture as a chapter in the history of mourning, New Review of Hypermedia and Multimedia, 21:1-2.

Lisbeth Klastrup (2015), “I didn’t know her, but…”: parasocial mourning of mediated deaths on Facebook RIP pages, New Review of Hypermedia and Multimedia, 21:1-2.

Jed R. Brubaker , Gillian R. Hayes & Paul Dourish (2013), Beyond the Grave: Facebook as a Site for the Expansion of Death and Mourning, The Information Society, 29:3.