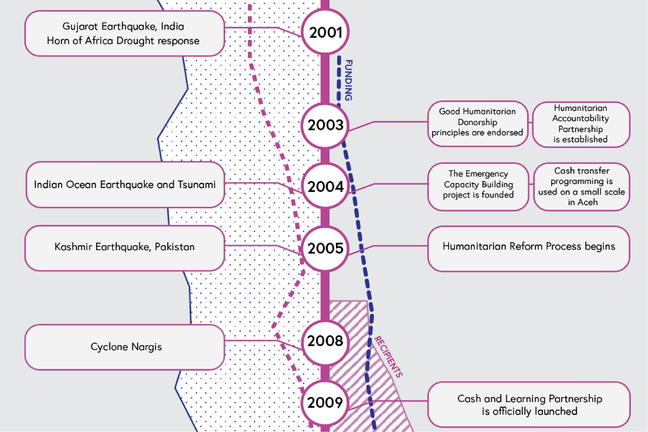 Focused detail of the change in humanitarian action timeline

Challenges to accountability in the humanitarian system since Rwanda

What would you identify as the key moments since Rwanda when serious questions have been asked about the accountability of the humanitarian sector?

Course note: Further down in the course we will be exploring subject matter that could be of an upsetting or sensitive nature for some learners around the world. Please note that the case study chosen is for the purpose of understanding the educational context around the subject matter.

The responses to many of the emergencies highlighted in this timeline have not necessarily been poor. The reality, as was seen in the Rwanda evaluation, is that in every emergency response there is good practice, and sometimes exemplary performance, given the conditions and context.

At the same time, you will see the humanitarian system continues to face unprecedented demand. In the ALNAP timeline, you will notice alongside the succession of major crises, and efforts to improve accountability, a noticeable increase in four areas

Despite examples of good performance, this increasing demand is placing strains on the system. Equally, a small sample of evaluations this century identifies a number of important issues which required attention at a system and organisational level at the time, and in some cases, still present major challenges.

This is not a complete list, so you are encouraged to research evaluations done on other emergencies during this period to identify learning.

Attached is the summary of one evaluation of the response by the UK’s Disaster Emergency Committee (DEC) to the Gujarat earthquake of 2001 (Vaux 2001). The DEC brings together 14 leading UK charities. Through appeals, it aims to maximise fundraising for major emergencies.

Read part one of the Vaux report, covering the response (pages 5-9) and parts three and four, covering conclusions and recommendations (pages 15-16) and consider: