The impact on victims

Victims of domestic violence and abuse are likely to experience serious health problems as a consequence. In this article, we’re going to explore the impact of DVA on women’s health and hear from survivors about how they have been affected.

This step contains first-hand accounts of abuse which are voiced by actors. A text transcript is available for all of the audio clips in this step under the Downloads section.

The diagram below seeks to explain the multiple pathways through which IPV leads to adverse health outcomes, which in turn lead to disability and death. 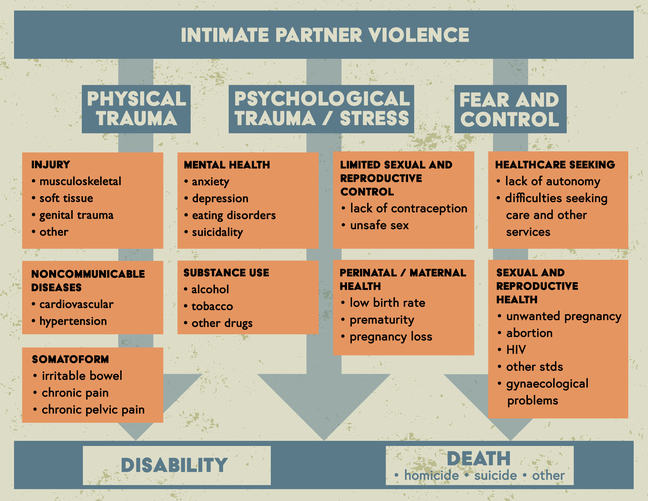 This includes direct pathways, such as physical violence resulting in injury and death, as well as indirect pathways, for example, exposure to violence leading to substance abuse or a chronic illness, which then results in injury or death.

An accessibility tagged version of this diagram is available under the Downloads section.

Approximately 42% of women who experience physical or sexual IPV sustain injuries as a result. These injuries could be severe and may result in permanent disability such as a loss of limb, hearing loss and damage to teeth.

There are many examples of minor injuries. These may include cuts, punctures, bruises and bites. We also know that victims of DVA report higher rates of poor health, compromised ability to walk, pain, vaginal discharge, loss of memory, dizziness and self-harm.

In the following audio clips, survivors of DVA explain their experience of physical trauma.

Survivor Testimony 1: “I have bruises all over my body”

Survivor Testimony 2: “I lost hearing in one ear”

When DVA happens in the form of sexual IPV, its impact may include unwanted pregnancy, miscarriage, sexually transmitted infections (STI) and other gynaecological problems.

In the following audio clips, survivors of DVA explain the effect that IPV has had on their reproductive and sexual health.

Survivor Testimony 3: “I had a miscarriage”

Survivor Testimony 4: “I didn’t know my partner had AIDS”

DVA is a major contributor to women’s mental health problems, particularly depression and suicidality. In fact, women who have experienced partner violence are more than twice as likely to experience depression.

In the following audio clips, survivors of DVA explain how IPV has affected their mental health.

Survivor Testimony 5: “I can not sleep at all”