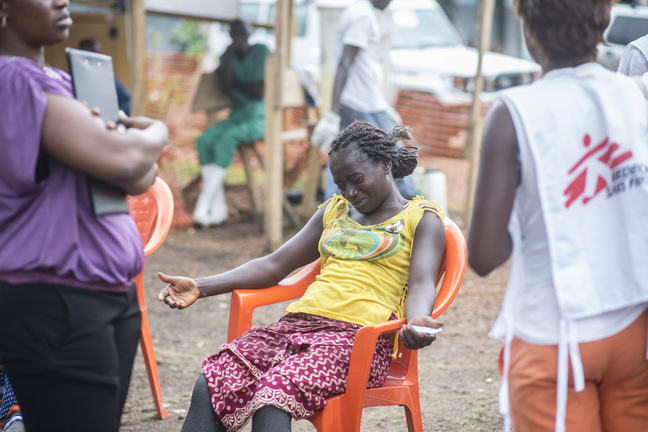 Ebola virus disease (EVD) affects equal proportions of males and females and is more common in adults than in children. The early symptoms of Ebola are similar to malaria and influenza, then patients develop vomiting, diarrhoea, pain and other symptoms, often leading to death within two weeks. Ebola infects many different cells, including those that are part of the immune response, allowing it to multiply quickly. It causes a widespread inflammatory response. The wide range of symptoms observed results from the inflammation and direct multi-organ damage.

In the 2014/15 West African outbreak, males and females were affected equally.1 All ages are affected but the incidence increased with age up to age 35-44, with a slight decrease thereafter. Most patients were aged between 15 and 44, and the proportion of children was much lower than would be expected from the age distribution of the population. Overall in the 2014/15 outbreak, about 70% of Ebola patients have died. This proportion is higher in those aged under 5 years and in older adults.1

Most of what is known about how Ebola causes disease comes from studies in animals (since it is difficult to do detailed clinical studies under outbreak conditions). Like all viruses, the Ebola virus cannot replicate on its own, it can only do so inside a living cell, taking over the cell’s mechanisms for reproduction. Some viruses have a narrow range of cells that they can infect. However the Ebola virus infects many types of cells including macrophages and dendritic cells. These cells form part of the body’s immune system, but Ebola is able to multiply within them and destroy them. Ebola further subverts the immune response by reducing the naturally produced anti-viral interferon. This results in immobilisation of the body’s defence mechanism, allowing the virus to invade and multiply unchecked in the blood stream and in many organs. The Ebola virus also triggers production of pro-inflammatory mediators from host cells. These cause a widespread inflammatory response that, together with direct organ damage from Ebola virus infection of different tissues, results in multi-organ damage and the variety of symptoms seen. Damage to the liver contributes to problems with blood clotting since the liver produces clotting factors. Kidney damage is either due to direct effects of the virus, poor perfusion, or damage from other bi-products of the infection. Pancreatic damage has also been described.

Referenced, regularly updated reviews of the pathogenesis can be found in the BMJ and in UpToDate.

The course of the disease varies. The early symptoms of Ebola are very similar to other common infections in the region, for example malaria and influenza, and include fever, malaise (feeling generally unwell), fatigue and body aches. It is suspected that some people get mild symptoms and recover, however this is unproven. There may also be some people who get asymptomatic infections.2

Typical symptoms among 700 patients seen in a treatment unit in Monrovia, Liberia were described as follows:3

Late complications include haemorrhage, secondary infections, and sudden, unexpected deaths. Secondary infections are thought to be due to bacteria from the gut gaining access to the circulation through damaged gut mucosa, and leading to bacterial sepsis. In the case series from Liberia, almost all patients who got to day 13 of the illness survived.3 Patients with a higher load of virus in the blood are more likely to die.4

Although Ebola is known as a ‘haemorrhagic fever’, spontaneous external bleeding is not common: only 1 of 87 patients in another study were found to have external bleeding,4 and among 3138 patients reported by WHO, 12% had any bleeding.5

The figure shows the frequency of different symptoms in more than 3000 patients. The data come from a paper by the WHO Ebola Task Force.5

Case definitions, case fatality rate, supportive care and prospects for specific treatment are discussed in detail in weeks 2 and 3.

Ade Igonoh, a doctor from Nigeria, described the development of her symptoms:7

‘I […] started experiencing joint and muscle aches and a sore throat. […] The first couple of temperature readings were normal […] I completed the anti-malarials but the aches and pains persisted. I had loss of appetite and felt very tired […] On Friday, 1 August, my temperature read a high 38.7°C. […] I recall the anxiety I felt that morning. […] On Saturday, 2 August, the fever worsened. It was now at 39°C (102ºF) and would not be reduced by taking paracetamol. This was now my second day of fever. I couldn’t eat. The sore throat was getting worse. […] Later that day, I started stooling [diarrhoea] and vomiting […]. That evening, the symptoms fully kicked in. I was stooling almost every two hours. The toilets did not flush, so I had to fetch water in a bucket from the bathroom each time I used the toilet. I then placed another bucket beneath my bed for the vomiting. […] The next day, Monday, 4 August, I began to notice red rashes on my skin, particularly on my arms. I had developed sores all over my mouth. My head was pounding so badly. The sore throat was so severe I could not eat. I could only drink […].’

Survivors comment on the severity of the pain. Salome Karwah from Liberia described:8

‘I barely understood what was going on around me. I was unconscious. I was helpless. The nurses had to bathe me, change my clothes and feed me. I was vomiting constantly and I was very weak. I was feeling severe pains inside my body. The feeling was overpowering. Ebola is like a sickness from a different planet. It comes with so much pain. It causes so much pain that you can feel it in your bones. I’d never felt pain like this in my lifetime.’