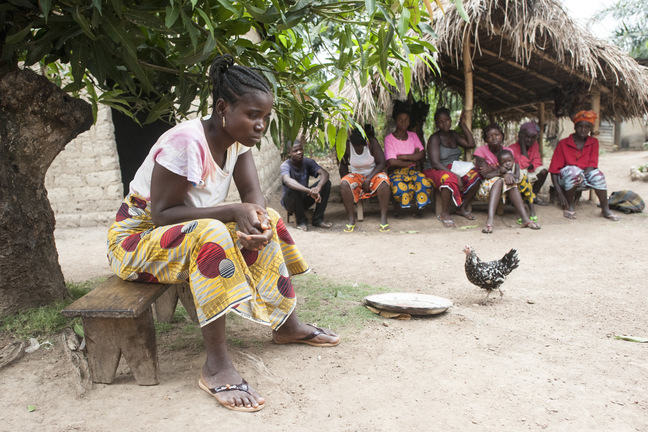 A woman who is having Ebola-like symptoms is being isolated from her family and community before she is taken to a treatment center to be tested for Ebola.

Both communities and individuals have been quarantined to try to limit the spread of Ebola. This has led to isolation, hardship and stigma. This article looks at stigma and isolation in the community. Later articles look at stigma towards survivors, health workers and others involved in the response.

Many border restrictions and road blocks have been constructed to restrict the flow of people and goods into and out of affected areas. This interactive map example outlines some of the restrictions in different areas. The quarantine restrictions are sometimes at county level, or for hotspots, but also for affected households. For example, in a press release on 24th September 2014,1 the Government of Sierra Leone set out a series of restrictions, including areas where homes would be quarantined if confirmed or suspected cases were detected. In Guinea the state of emergency regulations issued in August 2014 included a regulation that contacts had to stay at their place of residence throughout their period of surveillance.2

The area restrictions have led to food shortages, and in some cases riots in quarantined areas. There were reports of quarantine restrictions being violated in Sierra Leone and Liberia due to lack of food deliveries.3-4 The Disasters Emergency Committee, an umbrella organization for aid organisations, stated that5 the quarantines put in place in Sierra Leone severely restricted travel, and that food trucks were not able to move from one area to another. The World Health Organization (WHO) warned that4 countries hardest hit by Ebola were beginning to suffer shortages of fuel, food, and basic supplies due to a suspension of services by shipping companies and airlines. A quarantined Liberian father of four stated,4 ‘I don’t have any food and we’re scared.’

There are accounts of how isolation due to contact tracing is felt among families and communities. In the Liberian town of Jene-wonde, population 300, 55 people were quarantined as of 3 December 2014,6 due to the death of two family members from Ebola. Among those quarantined were Hawa and 12 of her family members. Hawa was nine months pregnant at the time. She was worried about where she would give birth, and who, if anyone, would attend to her.

The community had ostracised the quarantined family due to Hawa’s deceased father-in-law’s denial when he first became ill with Ebola. Though he had been employed at a local medical clinic before the epidemic struck, he was distrustful of the local Ebola treatment centre and refused to go for treatment. His daughter Alice explains,6

‘When our father got sick, he refused to be taken away by health workers because he was afraid that if they took him, he would die because all the people the ambulance took away died, they never returned. […] We put him in a small house at the back of our house and when we want[ed] to enter we would wrap our hands and feet with plastic bags or wear gloves if we had some.’

Alice’s father also refused food aid, as he suspected that the aid had caused Ebola in a nearby village. The family had subsequently been refused food aid, even after the father had passed away, so depended on a relative living in a different village to provide food. Water was also in short supply, as the family could no longer fetch water from the town hand pump. Alice explains, ‘Since they quarantined us, they don’t give us food or water and we’re just sitting here, we can’t go anywhere.’

A family in Caldwell, Liberia had been quarantined due to their tenant secretly caring for her sick mother, who was eventually moved to a treatment centre where she died.7 The tenant also succumbed to Ebola. The family of 15 people felt that they were suffering because of their tenant’s actions. Their most pressing worry centred on food access:

‘We’ve been quarantined for close to two weeks and my family is too large for the half bag of rice that was donated […]. [I]t is very hard on us right now and we can’t move around for help. My family needs help.’7