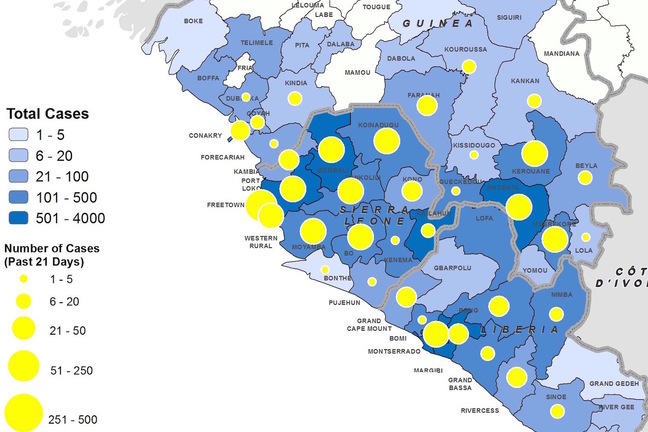 Geographical distribution of probable and confirmed cases from November 1- November 21, 2014 and total cases in Guinea, Liberia, and Sierra Leone

Epidemic curves and the spread of Ebola

Epidemic curves are used to describe the course of an epidemic over time. The shape of the curve can give clues to the transmission route and source of the epidemic. Ebola is an example of a propagated epidemic. The graphs of new cases over time in West Africa are a combination of many mini outbreaks happening simultaneously.

The Ebola outbreak started in Guinea, near the border with Sierra Leone and Liberia. The spread of cases up to November 2014 is shown in the New England Journal of Medicine Ebola case time series.

For example, in a point source epidemic everyone is exposed at about the same time. The epidemic curve therefore depends on the incubation period. It might look like this:

If you know the minimum and maximum incubation periods you can pinpoint the likely time of exposure by counting back from the first and last cases.

In a common source epidemic the exposure is from one source but over a more prolonged period of time. The curve gets spread out like this:

In this situation the time interval between the first and last cases of disease is longer than the difference between the minimum and maximum incubation periods. An exposure on a single day cannot account for all of the cases. A curve like this allows you to calculate the minimum time period over which people have been exposed.

In a propagated epidemic due to person-person transmission you may see different waves of the epidemic as different groups of people are exposed. A curve like the one below might be seen as an infection moves through classes in a school or from village to village. The time interval between the peaks corresponds to the average serial interval. The serial interval is the time between the same stage of disease (e.g. fever onset or rash) in successive cases in a chain of transmission.

Below is the epidemic curve for the Ebola outbreak in Kikwit in 1995. It fits the typical pattern of a propagated epidemic. (Note these are dates of death, not onset.) Note that the time between the peaks is approximately 2 weeks. This fits with an average serial interval of approximately two weeks for Ebola. (This can be measured directly when the likely source of transmission is known.)

Below are the epidemic curves for Guinea, Liberia and Sierra Leone as of December 2014. Note they are drawn to different scales.

Each curve combines data from different affected regions, and within each region there are many smaller related outbreaks. It is a propagated outbreak, with many new mini-outbreaks happening simultaneously, so the typical pattern is obscured.

For example, the outbreaks in different areas of Sierra Leone are shown below.

To see the latest figures go to the WHO website or the site produced by the Centre for Mathematical Modelling of Infectious Diseases at the London School of Hygiene & Tropical Medicine, which includes detailed regional data up to July 2015.

Note that there are considerable difficulties in counting cases. These are addressed in a later step.