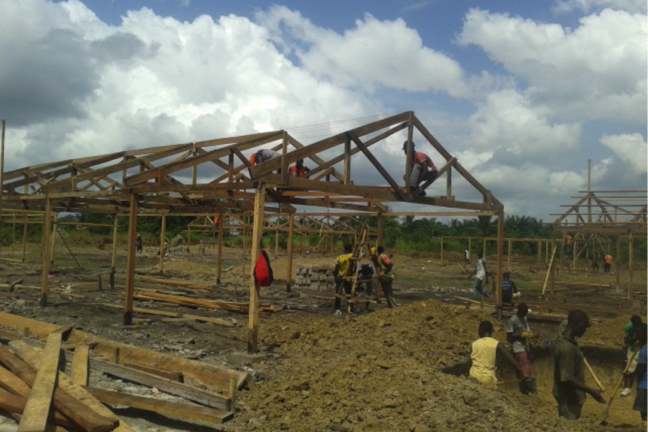 Community Care Centres (CCCs) are facilities that can be established relatively quickly, and require a lower level of staffing than Ebola Treatment Units. They have been planned and set up as emergency measures where the epidemic was out of control, to provide early isolation of patients and basic care. The concept has changed as the epidemic evolves.

Why are CCCs needed?

Isolation and care takes place in Ebola Treatment Units (ETUs) but scaling up Ebola treatment facilities quickly enough to adapt to the rapidly increasing caseload has been one of the major challenges in the West African epidemic. This has prompted the development of new, innovative and complementary approaches to help curtail the epidemic. Community Care Centres have been developed in that context. Such centres are simple units that can rapidly be deployed in high transmission areas, or remote areas located far away from Ebola treatment facilities, with lighter staffing requirements than ETUs. The intent is to provide basic supportive care to suspected patients and early isolation much closer to home. Early isolation of suspected cases is central to reducing onward transmission in the community and lowering the reproduction number (R) to below the epidemic threshold (R<1).

Different models of CCCs have been proposed and several have been implemented in counties in Liberia and Sierra Leone during the current epidemic. They vary in size from small 5-8 bed centres to larger 30-bed centres. Some CCCs have been designed to allow patients to be admitted with a caretaker, such a as a household member or a close relative, or allow food to be brought to them by relatives and community members. By being closer to the community they help to mitigate the fear of loved ones disappearing in an ambulance and not being traceable, as sometimes happened earlier in the epidemic. Importantly, CCCs are designed to be community-centred and have community buy-in. The intent is also for CCCs to be focal points for community awareness activities, and provide safe community burials.

Typically, infection control practices may not be as rigorous in CCCs as in ETUs, particularly if relatives are involved in patient care. This has often been cited as an argument against the CCC concept. On the other hand, in situations where the epidemic is out of control, the risk of transmission within those centres has to be balanced against the benefit of removing patients from home-based care, helping relatives to provide care safely rather than unsafely, providing supportive care, and reducing onward community transmission. Modelling work suggests that the level of reduction of community transmission if such CCCs were scaled up quickly, would outweigh a modest risk of within-centre transmission.1

A practical response to a changing epidemic

Since it was first proposed, the concept of CCCs is adapting to the changing epidemic trends. As the first few CCCs opened in Liberia at the end of October and early in November 2014, the weekly number of new reported cases was plateauing or declining in most counties, and ETUs were running far from maximal capacity in areas where such CCCs were being set up. Why the number of new cases declined in Liberia at this time remains unclear, but probably includes a combination of behaviour change in the community, safe burials and the scaling up of treatment facilities. As a result, newly established CCCs were managed more as holding centres providing basic care and laboratory testing of suspected cases, and safe transfer of confirmed cases to ETUs. Rather than planning for more CCCs, epidemic control strategies in those areas shifted instead to strengthening early identification of new cases in the community, contact tracing and rapid containment. In Sierra Leone, the epidemic situation in November and December was more worrying, with many counties still reporting an increase in the number of new cases.

The planning of CCCs highlights the importance of flexibility and adaptability in tailoring strategies to specific epidemic situations. While standard ETUs are the best available options for treatment and isolation, building such facilities requires considerable time and resources. Community Care Centres were not presented as a perfect solution, but rather a pragmatic approach to achieving epidemic control rapidly in high transmission areas and to providing care to patients who would have otherwise not have been able to access formal care.

Evaluations were planned for Community Care Centres, to assess their impact on transmission and patient outcomes, the community perception and acceptance, and the best model for their implementation. However many of the CCCs were never built, because of the changes in the epidemic, and the number of patients seen in the centres may be too small for a formal assessment.