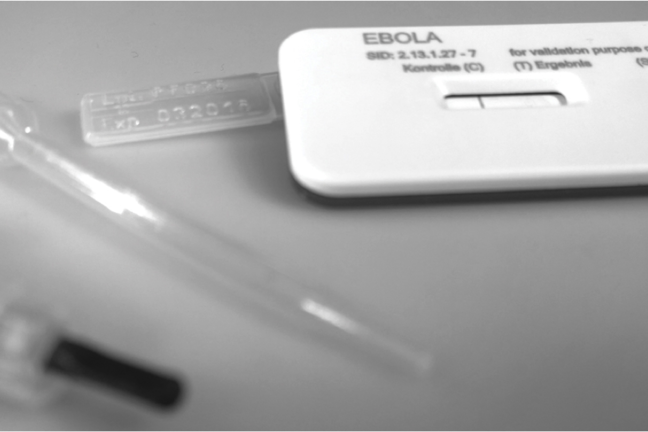 Senova's prototype rapid diagnostic for Ebola virus is being tested in Guinea.

Suspected Ebola: the importance of confirming the diagnosis

The aim of infection control is to prevent spread of infection from infectious Ebola patients to people who are uninfected. However there can be considerable delay and difficulty in knowing who has actually got the disease, because the initial symptoms are similar to those of many other illnesses. Those who actually have Ebola need to get to an Ebola Treatment Unit (ETU) as soon as possible to minimise onward transmission (and for treatment). Those who do not have Ebola need to be kept away from patients with Ebola while waiting for their diagnosis, but achieving this separation is a major challenge. Easier ways of confirming Ebola are needed. In this article we look at the particular difficulties that arise for people with suspected but unconfirmed Ebola, and discuss the search for rapid diagnostic tests.

In previous steps we considered the importance of confirming the diagnosis in order to know what is happening in the epidemic and to measure case fatality rates. In this step we look at it from the patient’s point of view.

The difficulties of having ‘suspected Ebola’

At home
The average delay for patients between disease onset and arriving at the ETU is 5-6 days. During this time there is a high risk of transmission to family members. The delay arises for a number of reasons, including:

In the ambulance
Ideally one patient at a time would be transported by ambulance to the treatment centre but in reality this does not happen. There are reports of several patients arriving together, sometimes including those who die on the way. This creates a major infection hazard.

‘They had been riding for about eight hours. There was an eight-year-old girl, a 30-year-old woman, and an adult male corpse… Along the way, the gentleman died. The two remaining passengers had no choice but to ride the entire day on rough roads through the sweltering heat with the uncontained and almost certainly contaminated corpse. It’s hard to imagine the terror of such an experience for an 8-year-old, nor for that matter for the young adult woman also in the ambulance. We were angry to think they had sent an apparently well child in circumstances that could and in this case absolutely did expose her to potential infection.’

At the Ebola care centre
When patients with symptoms compatible with Ebola arrive they are triaged to a holding centre or ‘suspect ward’ to await confirmation of the diagnosis. The arrangement of centres varies. This interactive map shows the different zones of an MSF ETU.

The holding centre or suspect ward inevitably contains a mixture of those with and without Ebola. Staff in the holding area wear full protective equipment. Patients are separated from each other only by physical space and instructions to stay apart.

’To try and prevent cross-infection we have dedicated bed spaces and each patient is told to stay in the individual bed space. They are physically separated by a curtain so there is no easy way for patients to communicate with one another unless they physically get up and go and converse with them. […] The staff in between each patient either change gloves or use chlorine wash […] The inside of the unit is washed down regularly – we have cleaners on every single shift – and every time there is vomitus or detritus on the floor the cleaners come in and wash everything down in strong chlorine solution […] Every patient has their own water supply, their own food supply, nothing is transferred patient to patient […] We try as far as possible to reduce any risk of cross-contamination. It’s impossible to completely reduce it: sometimes there are very ill patients that are there, there are confused patients that […] are walking between bed spaces […] We also try to separate […] patients in the first stage of illness where they’re not vomiting and don’t have diarrhoea, just feeling a bit febrile and a bit unwell […] from the people […] who have more progressed disease with diarrhoea and vomiting; they’re in an entirely separate part of the holding area where they should be very little likelihood of them coming into contact with any bodily secretions.’

Confirmation of an Ebola diagnosis requires a blood test from a venous blood sample. This is complex in itself because of the risk to staff taking the blood. MSF have a technique involving 3 health workers in full PPE, one to take the blood, one to hold things and one to spray chlorine as needed. This is clearly not something that could be done easily in the field. The blood has to be transported to a laboratory for a reverse-transcriptase polymerase chain reaction (RT-PCR) test. This is very accurate but takes several hours to do plus the transport time: it can only be conducted in laboratories with high level biosafety. In many places this means waiting days for a diagnosis. A negative test should be repeated 2 days later because the viral load can be low and undetectable early in the illness. However this may mean keeping people who don’t have Ebola in the suspect ward or holding centre for longer.

Initiatives are underway to replace the venous blood RT-PCR with a rapid, simple and safe test.3 WHO describes:3 ‘the ideal test should be suited for use in peripheral health clinics with no laboratory infrastructure in place. Testing procedures should involve fewer than three steps, produce results in less than 30 minutes, and have no biosafety requirements beyond the wearing of personal protective equipment.’ A point-of-care test using a small amount of blood from a fingerprick rather than a whole tube of blood from venepuncture would significantly reduce the biohazard and would be much easier to implement away from health centres.

It is possible that new tests will not be as accurate as the existing ones. The performance of diagnostic tests is measured in terms of their sensitivity and specificity. The sensitivity is the proportion of those with the disease who would be detected as positive by the test. The specificity is the proportion of those without the disease who would be detected as negative by the test. Ideally a test would have high sensitivity and specificity, but in reality a very high sensitivity may be achieved by compromising the specificity, and vice versa. For use in the field a very high sensitivity would allow those who probably have Ebola to be identified and brought for further testing, so would be important for removing infectious individuals from the community. A high specificity would be needed to ensure that people who do not have Ebola are not mistakenly diagnosed as having it.

Several different companies are developing new diagnostic kits. Most of these are simpler forms of the RT-PCR tests. Others detect Ebola antigens in an equivalent way to over-the-counter pregnancy tests, and these could be used as point-of-care tests on fingerprick blood spots.4 The first rapid test to be approved for procurement in Ebola affected countries is ReEBOV Antigen Rapid Test Kit (Corgenix, USA). This gives a result in 15 minutes but is less accurate than the RT-PCR tests, with a sensitivity of 92% and a specificity of 85%. Those proportions mean that 8% of people with Ebola would be missed by the test, and 15% of those testing positive for Ebola would not actually have Ebola. Repeat testing with the standard tests is therefore recommended.