We saw how tougher sentencing polices can significantly reduce crime through incapacitation and deterrent effects.

At the same time, there are important social costs associated with incarceration. In addition to the direct cost of maintaining prison facilities and hiring staff, incarceration may deteriorate future employment prospects of the inmates and aggravate their recidivism risks. Furthermore, children of inmates are likely to suffer emotionally and financially. Only when the social benefit of incarceration (mainly in the form of crime reduction) exceeds its social costs, tougher sentencing and large prison population would be considered as a reasonable crime-fighting strategy.

Does Prison Straighten or Harden Criminals?

So far we focused on the incapacitation and deterrence effects of prison. However, one of the main objectives of the correctional system is to “correct” offenders’ criminal risks through appropriate counseling, training, and rehabilitation programs. Although many staff members in the correctional system work very hard to achieve this goal, high rates of recidivism suggest that prisons may in fact aggravate inmates’ criminality. For example, about 70 percent of U.S. prisoners are re-arrested and 50 percent return to prison within 3 years of release. Nearly 50 percent of adult offenders in the U.K. commit a new crime within 1 year of release. The high rate of recidivism is particularly worrisome in the U.S., where the number of prison releases rapidly increased in recent years (See Figure 1). As more than 500,000 offenders enter and exit from American prisons each year, sentencing and post-release supervision policies that can lower recidivism risks would be tremendously valuable. 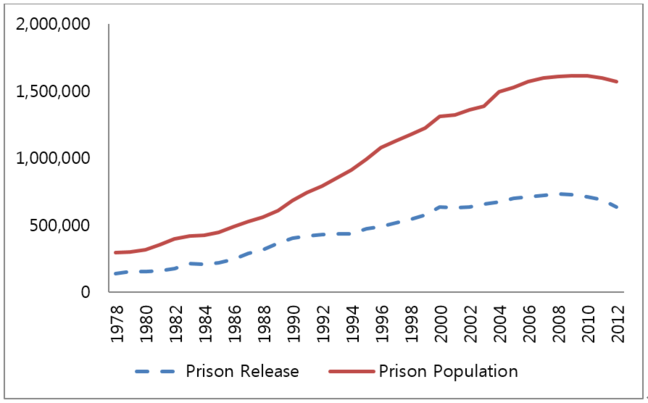 Many economists (perhaps not surprisingly) suspect that adverse effects of incarceration on future employment prospects may be an important factor for high rates of recidivism. Stable employment is widely believed as one of the key factors in successful community reentry and criminal desistance. If the experience of incarceration makes it harder for a former offender to find a stable job, wouldn’t this increase the probability that he commits new crimes?

Employment prospects of former prisoners do not look good. Jeffery Kling’s analysis on the post-release earnings of Florida prisoners shows that only 30 percent reported having any legitimate earnings 7 years after release. The share of prisoners who report legitimate earnings above the official poverty line is even smaller (20 percent). Of course, their misfortune cannot be entirely attributed to prison experience. Many offenders have lower education attainment and less job experience than the general population in the first place.

Meanwhile, it is still possible that imprisonment causes inmates’ employment prospects to deteriorate. Incarceration prevents inmates from acquiring formal work experience and developing work skills, which may be particularly damaging for a large number of prisoners in their 20s and 30s. Stigma associated with imprisonment may be another relevant factor. Survey data from more than 3,000 employers in American big cities show that more than 60 percent of employers would “probably not” or “definitely not” hire an applicant with a criminal record (Holzer, Raphael, and Stoll 2006).

These survey data may still understate the difficulty of finding a job for a former prisoner. Consider the following “auditing” experiment by sociologist Devah Pager. Two pairs of young male “auditors” (one white and one black) were hired and sent out to apply for various job openings in Milwaukee. The auditors closely resembled each other in age, education, work experience, physical appearance and demeanor. The only difference was that, within each pair, one auditor was “assigned” a criminal record (by the researcher) and the other was not. Pager found that having a criminal record significantly reduces one’s probability of employment. The white male auditor without a criminal record received a call back from 34 percent of the job openings he applied for, while the one with a criminal record only had 17 percent call back rate. For black auditors, a criminal record reduced the call back rate from 14 percent to 5 percent.

Troubles for Children of Inmates

As the number of prisoners rapidly increased, so did the number of children of prisoners. The absence of a parent due to incarceration can be particularly detrimental to children’s emotional development and economic well-being. It is difficult to quantify these disadvantages, but economist Rucker Johnson reports that, on average, children’s family income falls by 22 percent and poverty rate increases by 38 percent while their fathers are incarcerated.

These early disadvantages may persist over time and affect children’s long-run life outcomes, including crime. Economists Randi Hjalmarsson and Matthew Lindquist analyzed criminal records of all Swedish men born in Stockholm in 1953, as well as their fathers’ criminal records. Their analysis shows that crime is highly intergenerational. One additional paternal prison sentence is associated with a 32 percent increase in the conviction rate of sons.

It is unclear how much of this increase in criminality is caused by parental incarceration, however. Crime and incarceration are highly concentrated among those socially and economically disadvantaged, and high criminal risks of children of criminals may be partly driven by these deep-rooted disadvantages. In any case, given the large number of children of prisoners in the U.S. (1.7 million as of 2007), more research on the intergenerational nature of crime would be highly valuable.