How do Young offenders respond to increased severity of punishment?

The main intuition behind regression discontinuity analysis is to find a setting where a small difference between highly comparable individuals leads to very different treatments because of a pre-determined cutoff.

In the example of the age 18 cutoff, offenders above age 18 are subject to the usual adult criminal justice system, but those below age 18 are subject to more lenient juvenile criminal justice system. When we focus on offenders who are just above and below age 18 (by a few days and/or weeks), there should be minimal differences between these two groups, on average, in terms of their maturity, education, employment conditions, etc. The only notable difference is that one group is subject to more lenient punishment. Then, any notable difference in their criminal behavior can be plausibly attributed to the difference in the severity of their punishment.

In their empirical analysis, Lee and McCrary obtained data on all felony arrests in Florida between 1989 and 2002, which contained information on the date of birth for each arrestee, as well as the type of offense, whether the arrestee was charged or not, and whether the incident led to a conviction and a prison term. They first examined whether there was a significant difference in the severity of punishment between offenders just above and below age 18. Figure 1 shows that the probability of being charged as an adult significantly jumps if an offender is arrested at age 18 or above. (You can find more detailed graphical analysis from their research paper.) About 20 percent of those just below age 18 were charged as adults (presumably because their crimes were very serious), while about 60 percent of those just above age 18 were charged (not all arrests lead to a criminal charge).

[Figure 1: Probability of Being Charged as an Adult] 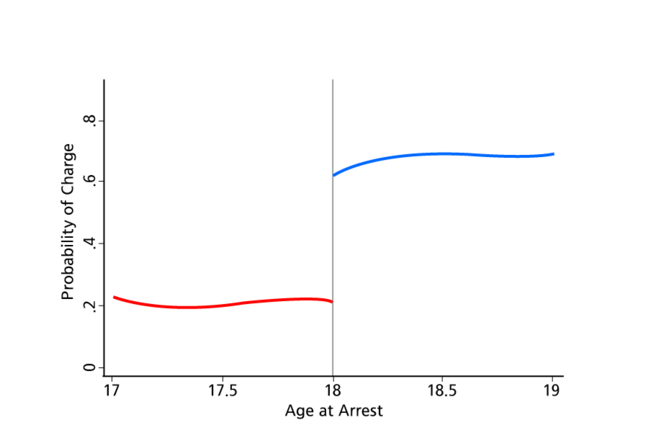 Figure 2 shows the probability of being sentenced to a prison or a jail. As in Figure 1, we see a significant jump at age 18. Offenders just below age 18 have a minimal chance of being incarcerated for their offense, while nearly 20 percent of those just above age 18 are sent to prison or jail. 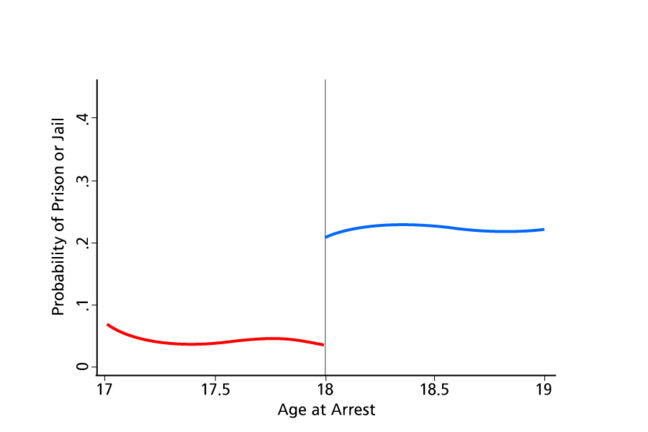 Lee and McCrary then examine whether this increased severity of punishment deters individuals just above age 18 from committing crimes. Figure 3 compares the rate of arrest by the age of arrest. Because of the increased severity of punishment, we would expect that individuals just above age 18 would be less likely to commit crime than those just below age 18. Assuming that the probability of arrest conditional of committing a crime is similar between offenders just above and below age 18, we would then expect the arrest rates would be sharply decline for those just above age 18 compared to those just below age 18. However, when comparing the rates of arrest due to a violent crime and a property crime, Lee and McCrary found little jump at the age 18 cutoff. This finding suggests that the increased severity of punishment does not seem to strongly deter young people around age 18 from offending. Can you come up with an explanation for this seemingly counter-intuitive result?

[Figure 3: Arrest Rates by the Age of Arrest] 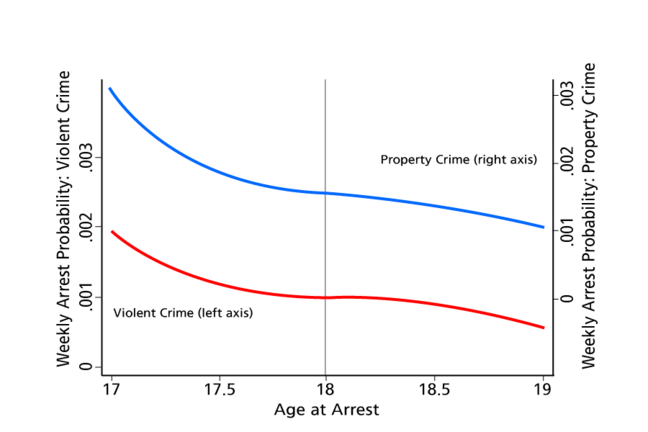