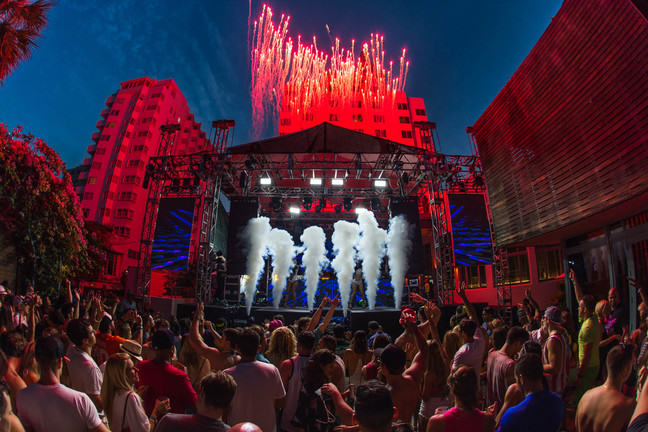 Large scale sound system in use

Now let’s scale up our thinking, and consider the entire sound reinforcement system at a concert and think about all the systems processes taking place.

Let’s start with the singer. A microphone is converting the movement of the air produced by her voice into electrical signals. A popular stage microphone is a “dynamic” microphone in which waves in air pressure cause a diaphragm to vibrate. There is a coil attached to the diaphragm which moves with it. The coil is wound around a magnet; the vibration of the coil in the magnetic field introduces a time-dependence to the magnetic flux linking the coil and hence, a voltage across the coil. The microphone is the sensor. A cable communicates the electrical signal to the mixing desk, where it is balanced with all the other signals by the sound engineer. 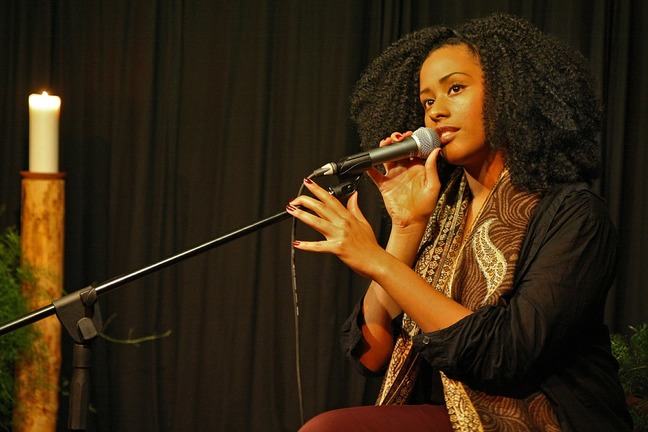 Now let’s look at the guitar and bass players. The signals from their instruments are also produced by pickups relying on electromagnetic induction, but in these pickups the coil is fixed and the movement of the metal string in the magnetic field of the magnet produces the changes in flux linkage which create the desired voltage signal. There might also be a piezoelectric pickup if either is playing an acoustic instrument. Both players probably have their own instrument amplifier which allows them to hear what they are playing. We’ve already looked at this sort of system. The loudspeaker in these amplifiers will be something like a dynamic microphone in reverse - electric current is fed through a coil around a magnet and the coil is attached to a movable diaphragm. A dynamic microphone in front of the speaker creates the signals communicated by cables to the mixing desk.

Now let’s look at the drums. Again, we have microphones around the drum kit. In this case some of them will be dynamic microphones again, with optimised housings to have a suitable acoustic response for each type of drum. Dynamic microphones do lose sensitivity at the upper end of the audio frequency range so some of the drum kit might be sensed with “condenser” microphones. In these a capacitor is the sensing element. One of the plates is a fixed metal plate, the other is a metal-coated flexible diaphragm which moves in response to the air movements. We need to supply a voltage to the capacitor and then as the capacitor changes, a small current flows (remember the terminal equation for a capacitor?). This sensor has a high output impedance so we need an “impedance converter” circuit to lower the output impedance. Then we can communicate the signal via cables to the mixing desk. A mechanical engineering knowledge allows us to understand that a condenser microphone can be more sensitive to high frequency and rapidly changing signals than the dynamic microphone, because the mass of the moving element is much less. You can find out more about how microphones work by looking at the website of major manufacturers such as SHURE and Neumann.

We have sensors chosen to match the specifics of the situation, in this case which instruments we are trying to connect to our mixing desk.

The mixing desk is where the signal processing takes place. Actually, not quite all, because many guitar players have their own “signal processors” before their personal amplifier in the form of “effects pedals” which might add distortion, or echo, or other signal processing to the sound from their instrument. 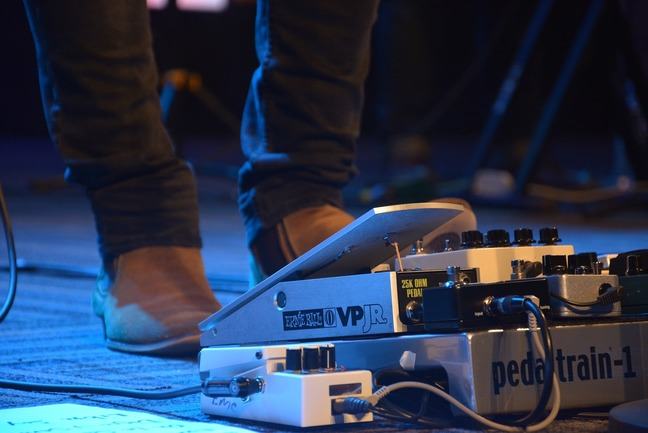 A typical effects pedal used to process the signal from a guitar before it is sent to the mixing desk.

Still, concentrating on the mixing desk, the mixer is used to balance the levels of the signals so all the performers can be heard, to change the tone (frequency content) of each performer’s signal, perhaps to add some signal effects such as echo and reverb. The processed signals are communicated via cables to power amplifiers and then to loudspeakers so the performance is heard clearly by another set of users – the audience. The processed and balanced signals might also be recorded in a storage device such a solid state memory or hard drive ready for further processing and/or reproduction.

Some of the amplified signal is transmitted by cables back to the performers, played through loudspeakers so that they know what they have played.

Giving information back to the user so that the user knows the right information has gone in is an important part of any engineered system.

An electronic engineer could be involved in the design of any of the components of this system. We’ve looked at the system as electronics hardware for analogue signals, but we could also be considering a digital mixing desk where analogue to digital converters are used to create digital information which is then processed through embedded software before being converted back into the analogue domain for sound reinforcement. So we could also need computer engineering to make the system work.