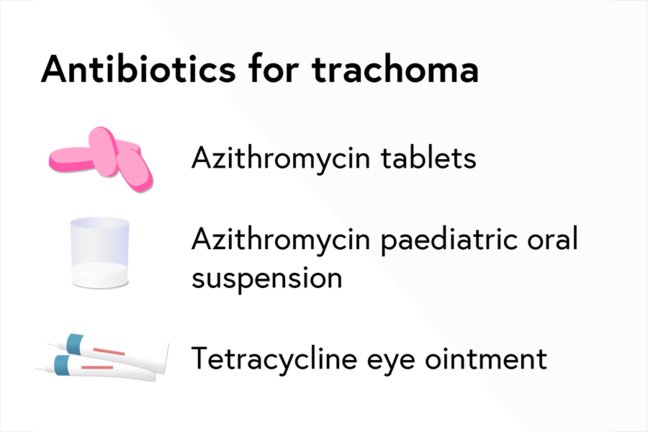 Antibiotics are the “A” of the SAFE strategy to eliminate trachoma as a public health problem. They are used with two overlapping goals:

Antibiotics effective against Chlamydia trachomatis are prescribed to individuals noted to have signs of active trachoma – in a clinic or during a survey. The objectives here are to:

Antibiotics are distributed to entire district populations as part of mass drug administration (MDA) events. This is to try to reduce the community load of Chlamydia trachomatis, and therefore achieve a sustained reduction in disease prevalence. Communities in which the most recent estimate of TF prevalence in 1-9 year-olds has been found to be more than 5% are eligible for annual rounds of MDA until the recommended number of rounds of MDA events have been completed.

A wide variety of different antibiotics have been suggested or trialled for trachoma treatment. Two are in current use:

A number of different tetracycline regimens have been used against trachoma. The one most often used now is 1% tetracycline eye ointment (TEO), morning and evening, every day, for six weeks.

It is administered as a ribbon of ointment into the lower conjunctival sac of each eye. 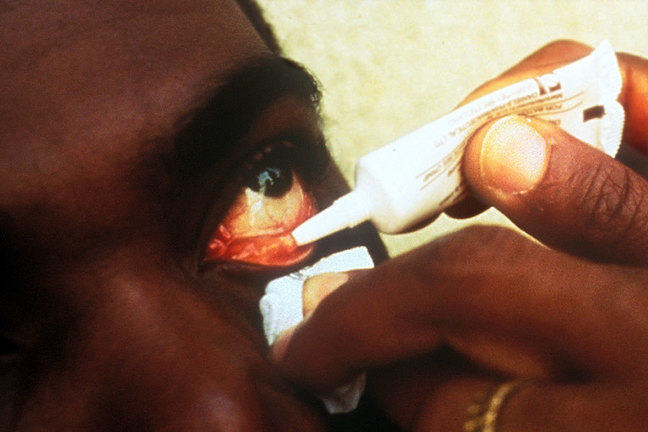 Azithromycin can be given topically or orally. Topical administration is one drop of 1.5% ophthalmic solution into the lower conjunctival sac of each eye, morning and evening, for 3 days.

Oral administration is a single dose of 20mg/kg body weight, determined by height, (maximum dose=1g) using standard height-based dosing schedules. These can be obtained from the International Trachoma Initiative.

Zithromax® is azithromycin which is donated by Pfizer for use for trachoma elimination. It can be obtained by national programmes from the International Trachoma Initiative.

Zithromax® is presented as 500-count bottles of 250mg tablets and bottles of powder for paediatric oral suspension. The powder requires the addition of 15ml of drinking water to make a total of 30ml ready-to-administer suspension. This is given to children who weigh less than 15kg and to people who have difficulty swallowing tablets.

Special packaging is used for donated Zithromax® intended for trachoma programmes. It is critical that Zithromax® which has been donated for trachoma elimination is only used for this purpose. Any other use could put the donation at risk.

Oral azithromycin should not be given children less than six months of age or to any person who has had a previous severe adverse event as a result of taking it.

Topical azithromycin can be given to people of all ages, including babies from birth. Like oral azithromycin, it should not be given to anyone who has had a previous severe adverse event as a result of using it.

Azithromycin is well tolerated in trachoma endemic communities. Most adverse events are mild or only moderately severe and affect the stomach or intestines - resulting in abdominal pain, nausea, vomiting or diarrhoea.

Communities involved in MDA events should be informed in advance that some people will have these reactions, and that such mild reactions do not indicate that the drug is harmful. Individuals who experience mild side effects should be reassured that they can still take azithromycin in subsequent MDA rounds.

Serious adverse effects such as a life-threatening illness, an illness requiring hospitalisation, or death, are extremely rare following azithromycin. If serious adverse effects are experienced, MDA teams should ensure that the affected person visits an appropriate health institution for immediate care. The circumstances should also be reported, in detail, to the national programme manager, who is asked to report the event to the International Trachoma Initiative within 48 hours.

No-one should ever be forced to take antibiotics. Forcibly restraining children so that medications can be put into their mouth can be particularly dangerous, because it risks the child choking.

Azithromycin, if available, is preferable to tetracyline eye ointment.