Baseline surveys must be undertaken before any SAFE interventions are started. Population based surveys are commended using WHO methods.

To ensure that SAFE interventions are implemented effectively, periodic monitoring is needed. The range of SAFE activities undertaken are context specific and therefore the monitoring indicators used may vary from place to place. The table below illustrates the logic framework used to monitor SAFE interventions in Tanzania. The framework summarises the inputs, activities, output indicators and outcome indicators.

The results of MDA programme coverage are shared at the district, regional and national levels. Data on coverage is also reported externally to the WHO, International Trachoma initiative and other programme partners. Further monitoring - through population-based coverage surveys - is used to estimates the proportion of population reached by MDA. 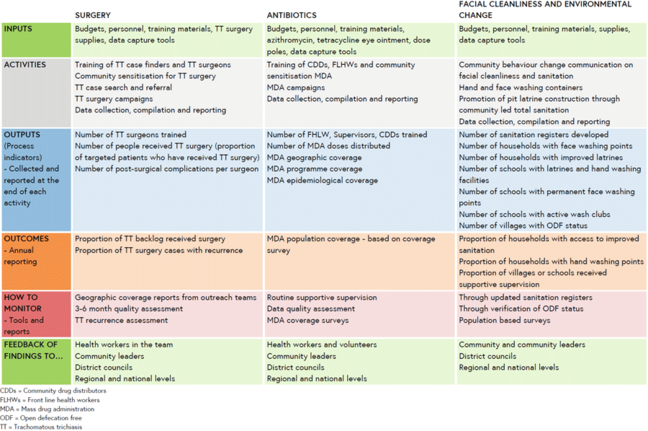 Impact surveys are carried out to decide when to stop:

The key impact indicators which determine whether trachoma is a public health problem are: prevalence of TF of <5% in children aged 1-9 and prevalence of TT of <0.2% in people aged 15+ years.

Population-based impact surveys are carried out 6 months after the final MDA round to assess the prevalences of TF and TT. Surveys are recommended as follows:

Once the impact indicators for TF and TT appear to reach the elimination targets, MDA and surgery for TT are stopped. However, F&E interventions should be continued.

Trachoma surveillance is the monitoring and evaluation activities which are carried out to assess the outcome of a trachoma elimination programme.

Surveillance begins after elimination prevalence targets appear to have been achieved in a defined trachoma endemic area and S and A interventions have been stopped.

Current guidelines recommend that population-based surveillance surveys should be undertaken at least 24 months after stopping MDA. If a surveillance survey shows that the elimination targets for TF and TT prevalence have been maintained, then trachoma can be considered to have been eliminated as a public health problem from the district. When all endemic districts have achieved elimination, the country is eligible for elimination validation.

Recently, research on the use of antibody-based multiplex assay has showed promising results as an additional tool for evaluating the transmission of trachoma. An indicator for ongoing infection within a community may be useful for additional tracking where elimination of trachoma has been achieved.