In this step I will walk you through the creation of a real-time algorithm: an alarm-triggering algorithm for my automated greenhouse system. You will then replicate this process to create your own algorithm.

All computer systems take input, process data, and output results. Algorithms are part of that middle step; they direct the processing a computer system performs to create meaningful data, for users or for other systems.

When you create algorithms, you need to ask three key questions:

For a real-time computing algorithm, you should also ask:

Designing an algorithm to trigger an alert

Going back to the earlier example, I will walk you through the creation of an algorithm to trigger the warning alarm in my automated greenhouse. The persona I used in that design will want some way of knowing when there is a system fault or some other risk to their plants.

I’ll begin by answering those questions.

What are the inputs?

My algorithm will have three inputs: the current temperature, a preset low value, and a preset high value.

The preset values will be set by the user, but for the purpose of this algorithm design, I will assume they already exist.

What conditions or processes need to be implemented?

What output do you want if those conditions are met?

If either of the above conditions is True (all conditional operations return a Boolean value), the system should trigger the alarm. In general, an alarm should be perceptible to more than one sense. Just using a light would require you to be in sight of the greenhouse, and just playing a sound risks that sound getting drowned out by other noise. My alarm should use both.

What will trigger the algorithm?

Event-driven systems use events generated by software and hardware to trigger logical operations. I should consider what event could be used to trigger this algorithm.

In the greenhouse, the temperature sensor will be taking readings regularly to monitor the environment; each reading is an event. The alarm algorithm could be triggered immediately after the reading has been captured. If the condition is met, the alarm will turn on.

I can now sketch out my algorithm using flow charts. In event-driven systems, the developer writes event handlers, which are subroutines that are called when an event occurs. This is what I will create now.

A flow chart for the alarm

I am going to start by declaring the inputs. When I implement this algorithm, it will need to access the registers that are storing these pieces of data. For the moment, I can just note down that the pieces of data will be input into the algorithm. 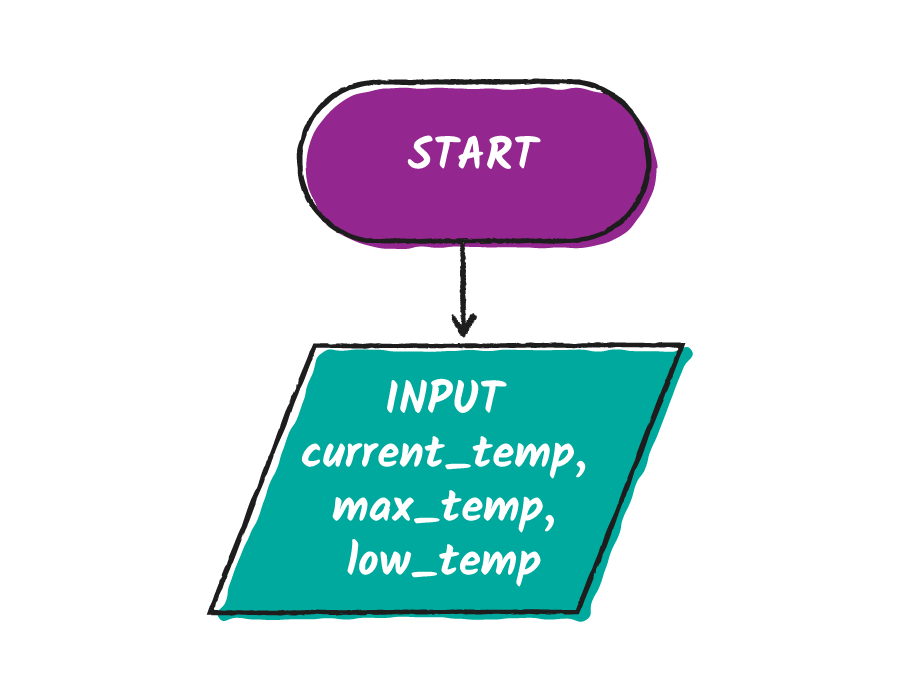 Next, I add two conditional statements, linked with an OR operator. This creates two branches in the algorithm: one where the conditions are True and the other where they are False. 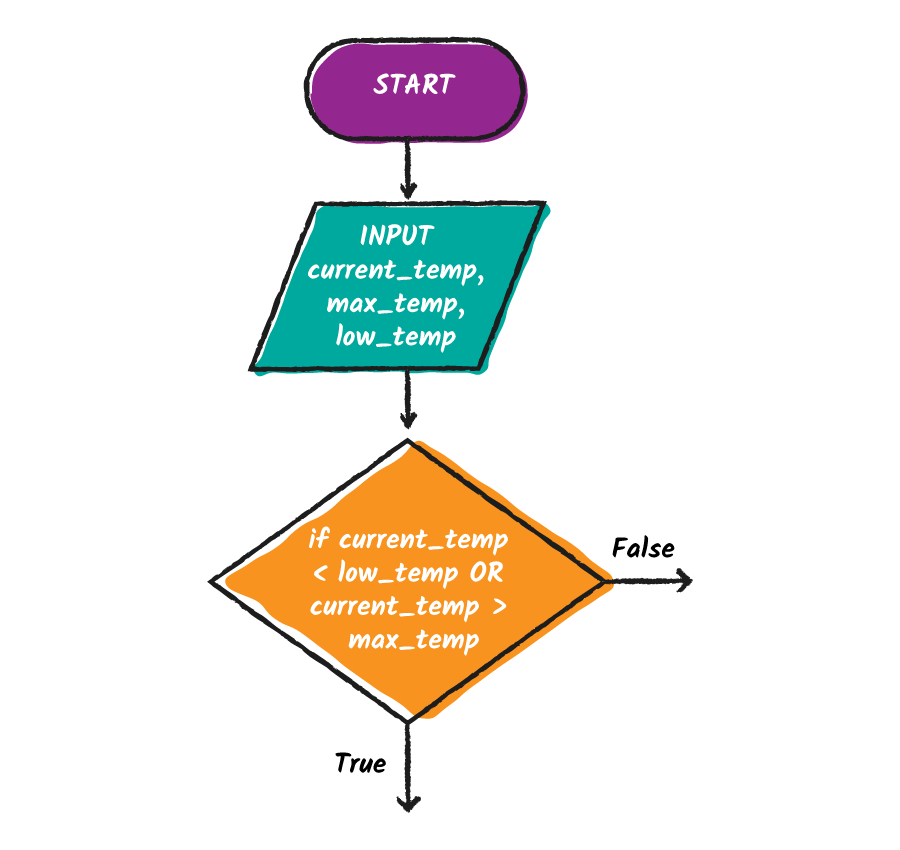 If the condition is True, I want the LED to turn on and the buzzer alarm to trigger. Then the algorithm can stop. 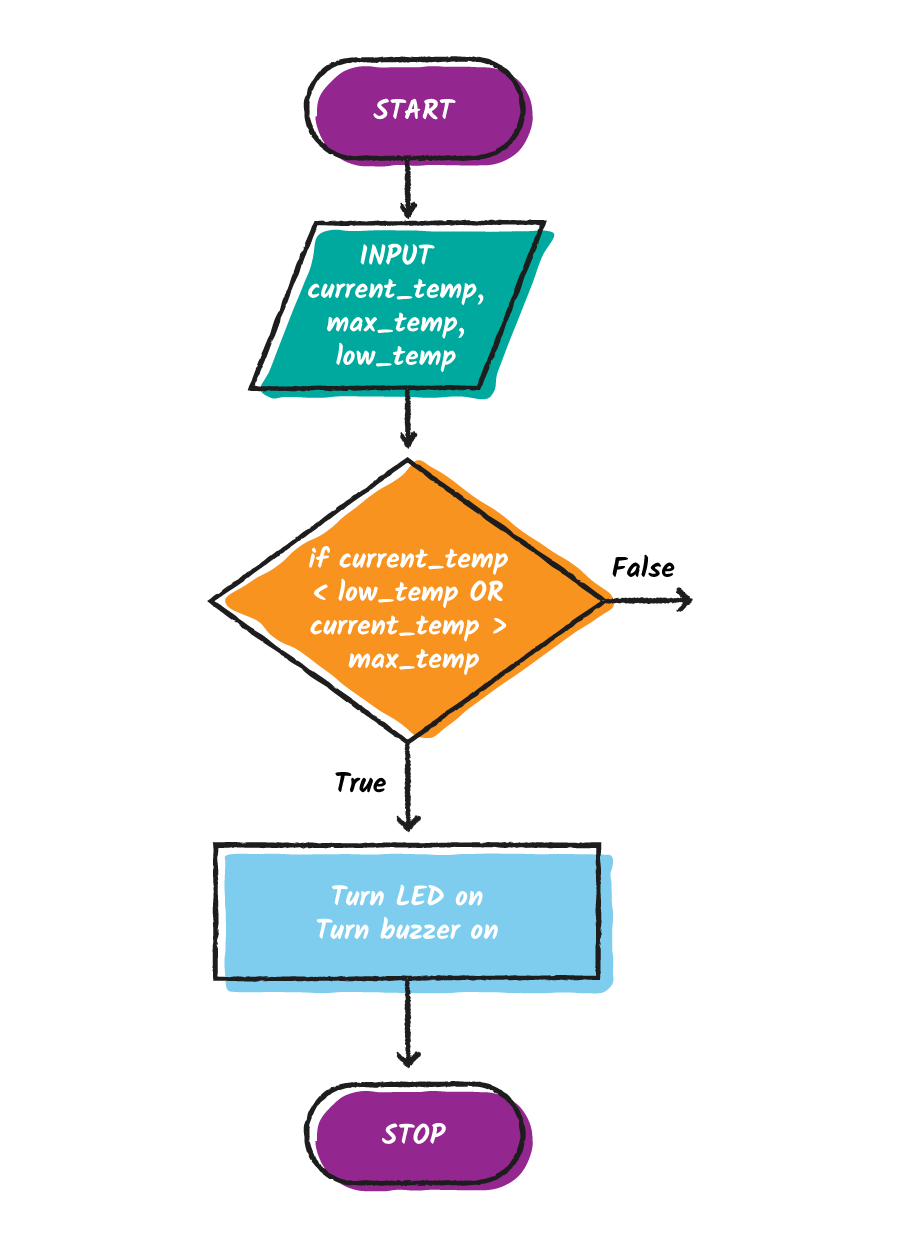 However, I should also think about how the alarm is reset. The current algorithm will turn the two components on, but it will never turn them back off. For this, I can use the other branch of the algorithm; if the condition is False, the greenhouse has returned to normal temperature levels, and the alarm can turn off. 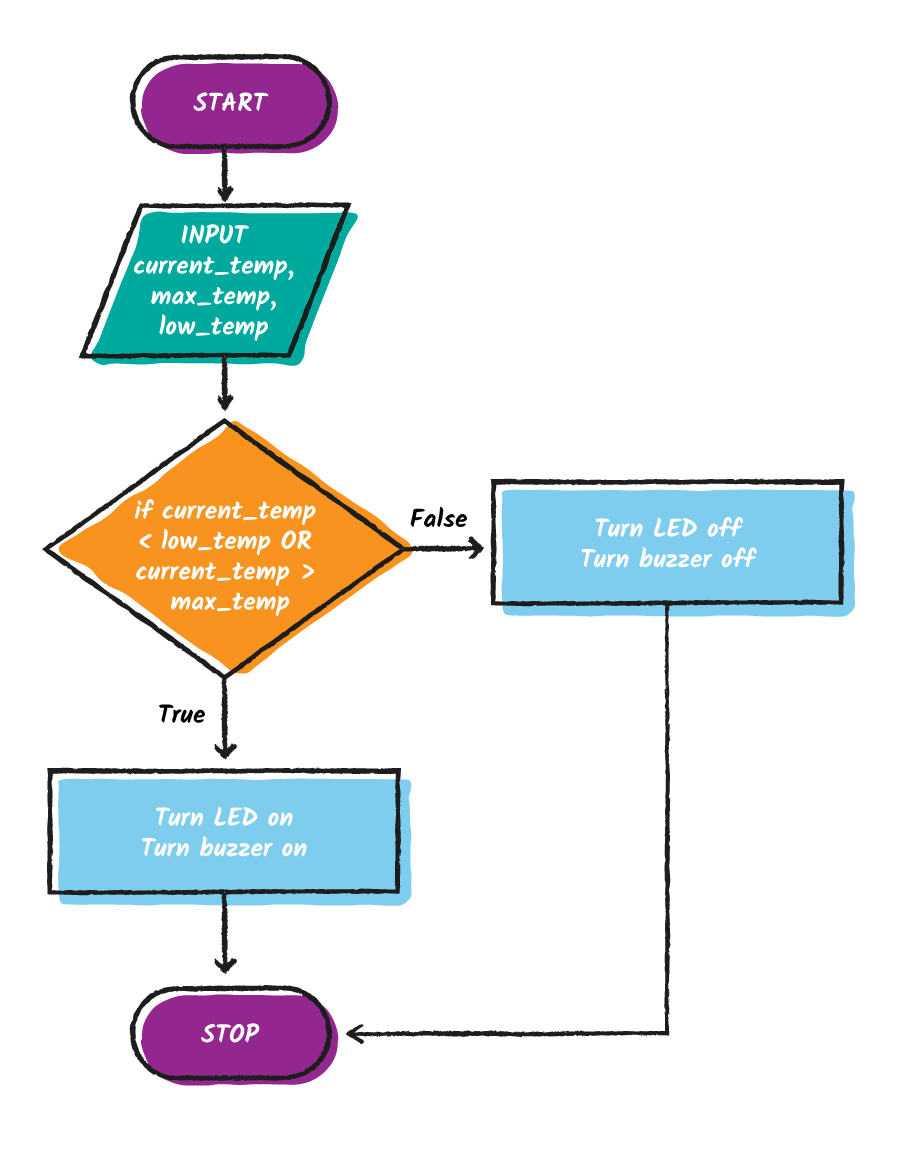 Now that I have made one algorithm to trigger an alarm, you can use this same process to create an alarm feature for another system.