The role of technological learning and innovation

First of all, policies should play a supportive role for research and development and market deployment of promising new energy technologies. The electricity sector has already experienced many decades of technological improvements. Coal-fired and gas-fired power plants have been developed for almost a century, and even nuclear plants have a history of decades. But many renewable energy technologies are not as developed yet. They still have (much) higher production costs and the efficiencies are not yet comparable with conventional fuels either.

The so-called ‘experience curve’ is applicable to energy technologies. In principle, it expresses the relationship between experience and efficiency gains. If the development of the investment prices for a technology is plotted against the global cumulative installed capacity, we see a continuous development with declining prices and production costs for different energy supply and demand technologies. Not only is this true for fossil fuel technologies, but especially photo-voltaic solar power(PV) has seen impressive reductions. See the figure below for a visualisation of the experience curve for PV. The green line shows Swanson’s Law, a 20% decrease in price for every doubling of cumulative shipped photovoltaics. The blue line shows actual world wide module shipments vs. average module price, from 1976 to 2014. Prices are in 2011 dollars. In the 1960s the price per Watt peak was several hundred euros, while it currently is below 1 euro. On the other hand, PV is still in a (relative) early stage of development, so it will take some time before it will be economic competitive with the matured fossil fuel markets. But besides the several energy supply and demand technologies, also energy efficiency follows the principle of the experience curve, even without policy interventions. Interesting of course is that policy interventions could be used to accelerate the energy efficiency experience curve. However, it is important to mention that experience curves should be used to analyse future production costs, and not to predict future market prices. For example, between 2002 and 2008 the prices for renewable energy have risen again. This is probably caused by a combination of a rapid increase in demand for these technologies and rising prices of the raw materials. 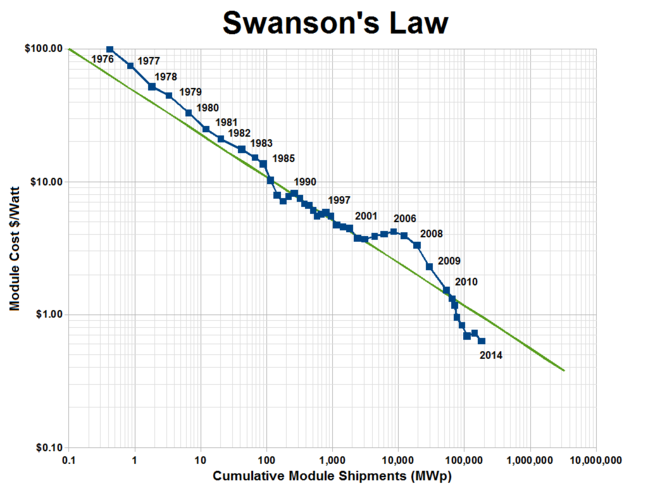 The core of most energy and climate policies across the globe is focused on the development and commercialization of renewable energy technologies. Those developments are needed to account for the growing energy demand and to meet the emission targets that are set worldwide. However, for the different key energy technologies, different drivers have caused the progress over time. Wind energy, for example, has experienced price increases until 2008. Reasons for this were increasing raw material prices, price increases in power technologies in general, and a steep rise in demand for wind energy, that resulted in a supplier oligopoly. But for the future, essential factors for improvements and cost reductions are making the existing turbines more efficient and more reliable. With regard to policy, a joint European policy concerning the stimulation of off-shore wind parks could be considered to reduce costs. For PV technology, the right balance between technology development and stimulation of market penetration is essential. This can be influenced either by supporting the market with subsidies or by investing in policy programmes that aim to improve the progress rate. From experiences in biomass-technology, it can be learned that policy support measures that were stable and consistent for a decade or longer were the most successful. This is because they reduce investment risks, and this stimulates the industry to invest in innovation.

In general, we have seen historically that the experience curve is best used on modular technologies that are mass produced, such as photo-voltaic. Another general observation is that raw material prices have a big impact on the development of costs of, among others, wind and PV. This does not mean that the learning has stalled, though. It can be concluded that the speed of technological development is a key factor to be on time to meet the globally set reduction targets, the efficiency improvements, and the total energy supply. We will further delve into how energy technologies shape energy systems next week.