Energy systems, what the heck?

Where does the energy we use come from? What forms of energy do we use? What constitutes our energy system? Consider electricity, a form of energy. Is a power plant where electricity is generated from burning coal the energy system? Are we as consumers part of this system? What are the boundaries? When you begin to analyse our energy use, you quickly discover the inter-relatedness of energy-resources and energy use by consumers, in agriculture, industry, for transport, etc.

In each case there are inputs, in the form of energy resources (e.g. natural gas, hydro, wind, solar, geothermal heat). There are outputs, which depend on what we use energy for, also known as the end-use (e.g. transport, heating, running a computer etc.). In between is energy conversion. Users, energy flows, and energy conversion systems together make up the energy system. In this topic, we would like to teach you the basics of energy systems, how we can analyze them, and use this ‘systems thinking’ to find solutions for the future.

Figure 1. A basic representation of an energy system.

The basics of energy systems

An example is that when someone wants to turn on the light in a room, electricity is required. In most countries, electricity is generated by a conversion process in a thermal power plant. Fuel (often coal or natural gas) is combusted under controlled conditions. The heat from combustion is converted to electricity in a steam cycle – a steam turbine drives a generator. The electricity is then transported over a national high-voltage grid and via regional distribution grids delivered to households and industry. Defining the ‘energy system’ in this example can be done in different ways, depending on the boundaries, context and purpose of analysis. The thermal power plant is a system, the grid is a system, the light bulb is a system, and combined they also form a system. More tools to construct this ‘systems thinking’ will be discussed in the following activity.

Using geographic scales, we can consider region or nation, each of which is characterised by its ‘energy mix’ – a unique diet of inputs used for meeting its energy end-use. A country’s energy mix results from discovery and development of its resource base, technology, transport, conversion and use systems, trade and demand. In the process, each country has developed its unique energy system.

For a detailed chart on the global energy mix, see IEA’s energy chart. 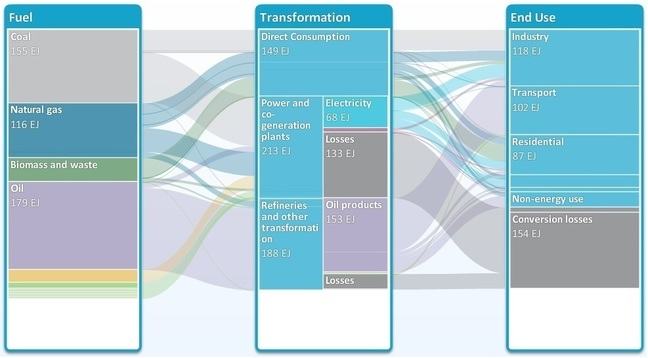 Figure 2. Energy chart which displays global energy flows, from fuel to transformation to end use.

Globally, non-renewable fossil resources make up the largest part of our energy mix – some 87% in 2013. This is no surprise, because since their discovery, coal, crude oil and natural gas have been in abundant supply, and they have long been the cheapest option. In the global energy mix in 2013 the share of oil was 32%, natural gas 24 % and coal 30%. In 2013 we consumed some 13,000 Mtoe - Million tonnes of oil equivalent of fossil resources – up from some 7,100 Mtoe in 1990. The combined effect of population growth and of economic development are reflected in our increased energy use. Oil quantities are expressed in barrels - 159 liters. On average, a ton of oil is equivalent to some 7 barrels. Thus mankind presently uses 100 billion barrels of oil equivalent (100,000,000,000 boe); on average, each person uses some 14 barrels of oil equivalent per year.

The current energy infrastructure in most countries is built around fossil fuels. We use gasoline or diesel in our cars; our industries run on electricity, natural gas, cokes, fuel oil and heating oil. In our electric power plants we combust coal, fuel oil or gas. In a number of countries, hydropower and nuclear produce a fair share of electricity. Renewable energy from wind and solar currently only yields 2% of our energy (2013), but is growing fast.

The challenge to decarbonise our energy system is both immense and fascinating. We would need to multiply renewable energy by a factor 50 to cover our total global energy demand. While such a renewable system would leave fossil resources in the ground, its realisation is accompanied by material use and land use – to meet half the demand by wind would require over 6 million modern wind turbines. These figures illustrate that shifting to a large share of renewables requires substantial investments, capacity building and social change. We will give you a more detailed outlook on energy transitions later this week.

Optional links for further reading on specific topics can be found below.

Discover the many ways that we benefit from the natural world through ecosystems.