We now have a better understanding of how to analyse and represent an energy system. Yet, how can we use this ‘systems thinking’ to try and find solutions to decrease our dependency on and systems that use fossil fuels? What about system change towards renewables?

For some it may sound weird, but there was a time when people used renewable energy sources almost exclusively. For thousands of years, mainly biomass provided mankind with energy for heating, cooking, building, etc. Nowadays about 20% of the human population uses these energy sources. The invention of the steam engine by James Watt in the 18th century, accompanied by discoveries of vast, easily accessible coal led to the industrial revolution in the Western world. Some 200 years later, many of us live in an industrial society.

It has brought us much comfort, but using fossil fuels for our energy demand is a finite activity. A simple indicator for this is the reserve to production ratio, the R/P ratio. The table below summarises the R/P for fossil resources1.

Table 1. Reserve to production ratios for some major fuels.

While the positive message is that there still are resources to meet our energy needs, the data also points us at the fact that we should realise the energy transition within the coming decades. Furthermore, the consensus among climate scientists is that to avoid disruptive effects of climate change, we should keep atmospheric CO2 below the level of 450 parts per million (ppm). This translates into a carbon-budget that implies we should not produce all these resources. A large part of known oil, coal and gas should stay underground, or should only be produced when we have effective carbon-capture and storage systems. Thus, to secure energy supply for most regions on earth and prevent detrimental effects on global climate, an energy transition towards renewables is required.

How can we change the interaction of different components not only on paper, but in the complexity of real life? When we are speaking of systems change, albeit very small, it will often require transition on a larger scale. Think of an engine for example. All parts are interacting in a precise manner, thus trying to change 1 or 2 parts often requires the engine to be (partly) redesigned. Our ‘engine’ in this topic is the energy system, wherever you are on the world.

In the previous video, we presented our global energy system as a collection of supply chains. In the first topic, we stated that full decarbonisation of our energy demand requires a 50-fold increase in renewables. The overview of our energy system supply-chains teaches us we have various options to change, and reduce our use of fossil fuels in various ways.

Obviously, to reduce our car’s fuel consumption, we can drive less or replace it by a more fuel-efficient car. We can reduce our energy intake, by making our homes, cars, factories, electric appliances more energy efficient, where possible, make less and more effective use of them. In energy efficiency, there is much to gain.

Table 2. Modern conversion efficiencies in percentage of some major fuels. In 2050, these values are expected to increase.

It can be expected that we will continue to use fossil resources for some time. Dramatic gains could be achieved by upgrading or replacing our energy systems. In 2013, for example, 68% of electricity generated originated from the combustion of fossil fuels, which consumed a total of 3.7 billion ton oil equivalent globally. Efficiency improvement of electricity generation thus could result in massive fuel savings. Would this be possible? The average efficiency achieved today is only just above 35% (see diagram below). Imagine on a global scale that we would bring this efficiency to the level of current best practices and state-of-the-art technology (as listed in the table). If we improve efficiency from 35% to 45% we would save some 20% of fuel input – or some 750 Million TOE (at 2013 levels) and avoid some 7% of global CO2 emissions. 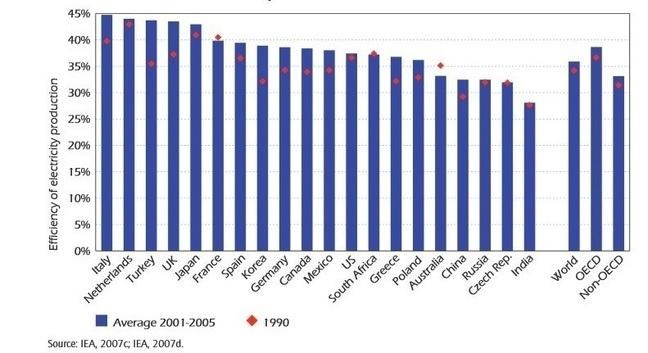 A similar argument holds for the fuel efficiency of cars and trucks, and for the end-use efficiency of energy in buildings and other sectors. Indeed, zero-energy buildings have already been designed and built. Overall estimates range from 20 to 50% ultimately achievable end-use energy reduction.

Increasing the efficiency of energy conversion and energy use is certainly part of the energy puzzle. When we do this, we should also take measures to avoid ‘rebound effects’, such as ‘after installing an affordable low-energy lighting system, we leave it always on because its energy use is very low”.