The legal framework for offshore wind and the offshore grid

This article outlines the legal framework for developing offshore wind energy and the sub-sea cables, which are necessary to bring the energy to shore.

The development of offshore wind energy needs to be considered within the scope of the EU Renewable Energy Directive, which has introduced binding national targets for each EU Member State to increase the share of energy from renewable energy sources (see the previous video). The North Sea States consider the expansion of offshore wind energy as an important means towards reaching their individual targets. In order to enable such development, the coastal States need to ensure that they have (i) legal powers offshore, (ii) established a legal regime for developing offshore wind energy and bringing the electricity to shore.

The extent to which coastal States have legislative powers offshore is governed by the 1982 United Nations Convention on the Law of the Sea (UNCLOS), which distinguishes between several maritime zones. For offshore wind energy, the most important zones are the territorial sea and the exclusive economic zone (EEZ). Within the territorial sea, the coastal States enjoy full sovereignty and have, thus, the same legislative powers as they have on land. Next to that, coastal States may declare an EEZ, which is an area lying beyond and adjacent to the territorial sea and extending to a maximum of 200 nautical miles[1]. The coastal State does not have sovereignty over its EEZ. Instead, it has “sovereign rights” regarding its natural resources and with regard to “other activities for the economic exploitation and exploration of the zone, such as the production of energy from the water, currents and winds”[2]. Consequently, the coastal States may exercise a functional jurisdiction in the EEZ, i.e. a jurisdiction limited to specific activities. This functional jurisdiction entitles them to regulate the establishment and use of offshore wind turbines and the cables connected to them[3]. 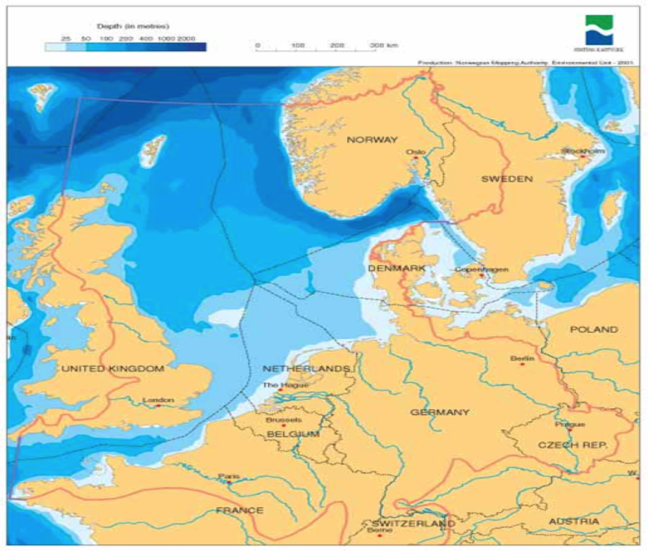 All North Sea States have established an EEZ, which gives them the exclusive right to generate electricity from offshore wind in- and outside the territorial sea[4]. As laws need to be explicitly declared applicable to the EEZ, coastal States could either extend existing national laws to the EEZ or adopt a separate legal regime for offshore wind and the sub-sea cables, which bring electricity to the shore[5]. Some States like Denmark and Great Britain have decided to apply the relevant national electricity legislation to the EEZ and deploy a system of competitive licensing or tendering regime for the development of offshore wind energy. By contrast, the Netherlands and Germany only classified offshore wind farms as installations requiring a ‘construction’ permit, which was granted on a ‘first come, first served’ basis. However, with the increasing scale of offshore wind development, the North Sea States gradually moved further towards a distinct legal regime governing offshore wind farms. These regimes are all based on a more centralised, government-led approach to the development of offshore wind farms.

As the number of wind turbines and their distance to the shore gradually increased, coastal States also had to address the question of how to transmit the electricity most efficiently to shore and how to regulate this. Each offshore wind park is connected to the onshore transmission grid via an individual cable, i.e. by a radial connection. Whereas originally these cables were considered as part of the offshore installation (= wind park), coastal States are treating these cables increasingly as a separate object and they are, thus, subject to a separate legal framework. Moreover, as laying cables is expensive business that may have a negative impact on the environment and hinder the other users of the North Sea, coastal States are also looking for alternatives such as connecting several offshore wind parks to one offshore transmission cable. This innovation will limit the number of offshore cables. In addition, the North Sea States are currently examining the idea to develop a transnational offshore grid that would connect wind parks to two or more countries. In comparison to the radial connections, these new approaches to the development of offshore cables could be more cost-efficient and have less detrimental effect on the maritime environment than connecting each wind park individually to the grid.

Since the development of offshore wind energy in Europe started in the 1990s, most North Sea States have, until today, amended their legal framework governing the development of offshore wind energy. These amendments also involve the construction and use of the sub-sea cables, which bring the electricity to shore. More changes can be expected as there is a need for more cross-border connections and approaches.

[5] On this development, see also Hannah K. Müller and Martha M. Roggenkamp, ‘Regulating Offshore Energy Sources in the North Sea: Reinventing the Wheel or a Need for More Coordination?’ (2014) 29 The International Journal of Marine and Coastal Law 716-737.

If you want to find some facts and figures about offshore wind, feel free to have a look at: