In many systems, components are mutually related in one way or another. A shock in one component may, therefore, affect many other components. Such mutual relatedness holds also for economies.

A direct effect of a downward shock in the supply of oil, for instance, is an increase in the price of oil that affects all consumers of oil products. Since oil is a key input in modern economies, a sudden increase in the price of oil may negatively affect all economic activities. Such indirect effects can be expressed as a multiplier effect which measures how strong other variables in the economy change in response to a specific exogenous change in a specific variable. The OECD (2011), for instance, reports that “a $10 increase in the price of oil could reduce activity in the OECD area in the second year after the shock by two tenths of a percentage point and raise inflation by roughly two tenths of a percentage point in the first year and by another one-tenth in the second year.”[1]

Another type of effect is the waterbed effect, which occurs when two or more markets are closely related. If the government decides to cap the prices in one market, firms may raise the prices in the other one. For instance, if the government would implement a maximum on the price newspapers may ask from readers, the prices for advertisements may go up because the costs of producing the newspapers need to be reimbursed in one way or another.

In energy-transition policies, also waterbed effects exist. If governments implement two types of policy measures to incentivise economic agents to reduce energy consumption, the net effect may be smaller than the sum of the independent effects. Giving a subsidy for insulating houses may stimulate house owners to implement these measures, while imposing environmental standards may also have as an effect that they insulate their houses. Combining both measures, however, may hardly be more effective than the individual measures. This occurs if an environmental standard triggers environmental measures which would also be implemented if house owner would receive a subsidy. Hence, in this example: making environmental standards more tight means a reduced effect of subsidies and vice versa.

The waterbed effect is in particular relevant in energy-transition policies if governments have implemented trading systems to reach their objectives. A prominent example of such a system is the European Emissions Trading Scheme for CO2 (ETS). All large electricity users and producers are obliged to participate in this system. The ETS is a so-called cap-and-trade system, which means that the systems caps the overall amount of CO2 emissions by all participants, while they have the option to trade in CO2 permits. The cap is meant to realise the environmental objective, while the trade option is meant to give the participants the flexibility to realise the emissions reductions as efficiently as possible.

In theory, a cap-and-trade system is the most efficient policy measure to realise emissions reductions[2]. If, however, a government combines a cap-and-trade system with other policy measures, the efficiency can be seriously challenged. To demonstrate this, let’s think what happens if a government also introduces a subsidy scheme to stimulate the production by renewable sources. The direct effect of such subsidies is that electricity produced by fossil-fuel fired power plants is replaced by electricity produced by renewable techniques. As a result, a reduction in CO2 emissions is realised. Hence, the electricity producers save on CO2 permits which they can sell in the permit market belonging to the cap-and-trade system. Consequently, the price of CO2 permits decreases, which triggers other participants within the system to emit more of this greenhouse gas. As a result, the net effect on CO2 of giving subsidies for renewables is zero when also a cap-and-trade system exists. 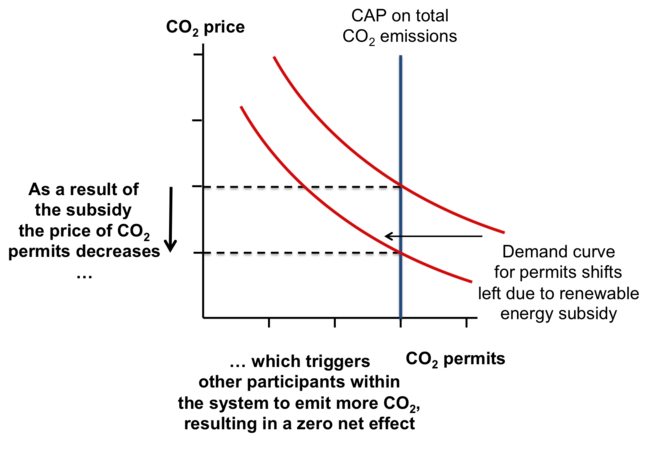 This waterbed effect is not an (unpleasant) side effect of having a cap-and-trade system, but it belongs to the heart of such a system[3]. Because of the trade component, the participants are given the option to trade in order to reduce the costs of emission reductions. If the same participants are also given subsidies to reduce their emissions, the rational response by the producers is to sell their permits. Hence, in order to define effective policy measures to realise an energy transition, the waterbed effect needs to be taken into account.

Discover the many ways that we benefit from the natural world through ecosystems.