How to conduct a cost-benefit analysis of energy-transition policies?

From a welfare-economic perspective, however, the objectives behind the measures are not relevant when we want to assess the overall costs and benefits. Governments may formulate many different objectives, but that does not imply that these objectives are welfare improving. Policy measures can only be welfare improving if they correct market failures. This means that the first step in any cost-benefit analysis of a policy measure is to assess whether that measure is directed at solving a market failure. When this is the case, it makes sense to assess the costs and benefits.

The next step in a cost-benefit analysis of a specific policy intervention is to determine what would happen if that intervention does not take place. This step results in the definition of the so-called counterfactual which acts as the benchmark for assessing the costs and benefits. The counterfactual is not just related to the current situation, but also describes how economic agents will behave in the future. Hence, the counterfactual refers to a scenario on how the economy (or energy markets) develop over time when no additional policy measures have been taken. In the next step, the costs and benefits of an additional policy measure can be estimated.

The costs of a policy measure include both the transaction costs for government and economic agents and the costs of the change in decisions made by these agents. Take for instance a subsidy for consumers to implement energy-saving measures. The transactions costs of this measure refer to all the costs of designing the subsidy, informing the public and the administrative costs for consumers. On top of these costs, the subsidy creates additional costs since it induces consumers to take energy-saving measures which are too costly for them without the subsidy.

It is important to acknowledge that a subsidy in itself is not a societal cost but only a transfer of money from government to market parties. The same holds for taxes: if a government imposes a tax on energy consumption, the tax paid by energy users to the government is not a societal cost, but a transfer from these users to the government. The costs of energy taxes are related to the changes in the decisions energy users make. If a tax on energy triggers consumers to make an investment to reduce the use of energy, the costs of the investment are the real costs of the tax on energy.

The costs of policies meant to reduce energy consumption by consumers need to be weighed against the benefit of having a lower energy consumption. If the policy objective of this measure is to reduce the environmental burden of energy consumption, this benefit can be expressed in monetary values by using so-called shadow prices for the environmental effects, such as the reduction in the emissions of NOx or CO2. The shadow prices can be determined in different ways. One method is to estimate the negative effects of the emissions on the health of human beings. This is the so-called damage-cost method. Another method for estimating the value of the environmental effects of a specific policy measure is to estimate which alternative policy measures need not to be implemented anymore to reach that same effect. This is the so-called avoided-cost method. 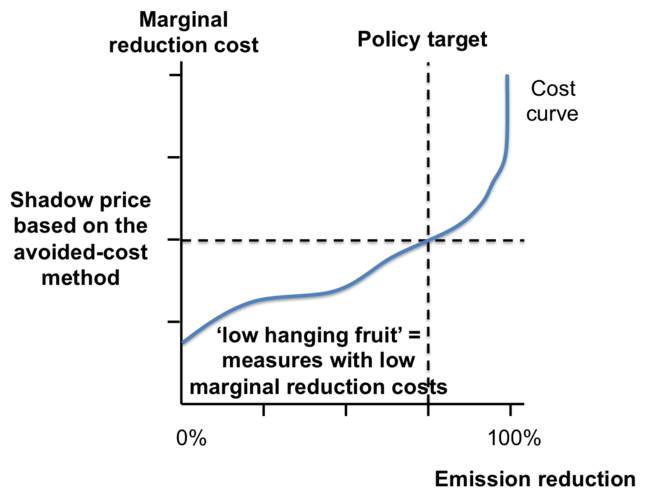 For two examples of cost-benefit analyses of energy projects, see the links below.