This content is taken from the University of Reading's online course, An Intermediate Guide to Writing in English for University Study. Join the course to learn more.
View course
3.13 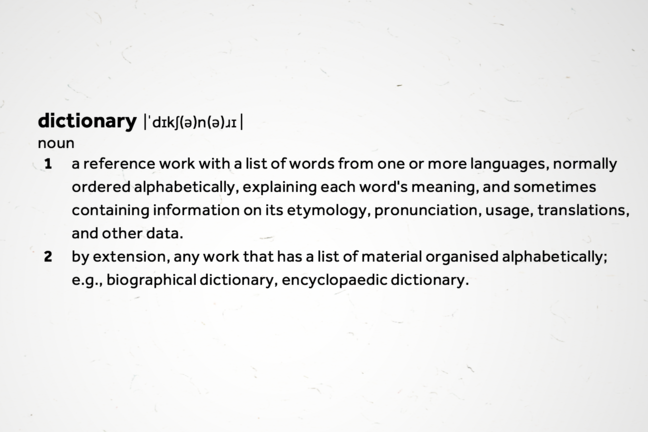 Using a dictionary effectively is crucial not only in language learning in general, but specifically in checking or improving your academic writing. If you use a dictionary regularly it can help you to extend your range of vocabulary and improve your grammatical accuracy. Below are some of the different types of information that dictionaries provide about a word.

Even if you are not sure about the spelling many online dictionaries have spell checks which can guide you towards the correct spelling.

What part(s) of speech it takes

Most online dictionaries have both the phonemic transcription and sound files which provide a model for pronunciation.

Common phrases including a specific word

For example; on the other hand, hand in hand, out of hand.

Combinations of words that often go together. For example;

Use in academic writing

Many dictionaries also indicate whether a word is often used in academic contexts.

You will probably already have a dictionary that provides translations between your first language and English, but you should also consider using an English-only dictionary.

There are many free dictionaries on the Internet and here are some that we recommend:

However, many of these dictionaries also have a subscription version or apps for your mobile device, which you have to pay for, but which offer many useful additional features. They are usually relatively inexpensive, and are good value for money as a learning resource.