When people think of innovation, they usually think of technological innovation. Even more specifically, they think about product or service invention. But not every innovation has to be completely new to the world and it is by far not always a technological one.

From an economic perspective, innovation is the process and outcome of creating something new, which is also of value. Joseph Schumpeter, the ‘inventor’ of innovation, called it a process of creative destruction. He argued that innovation results from new combinations of assets, knowledge, people etc. This leads to new products and services, new markets, new structures and processes, or new sources of supply. While product innovation was dominating in the past, today the focus has shifted towards innovation in business models.

Especially the focus on product innovation has fueled the often existing identical understanding of innovation and invention. But a product or service can be new to a group of people, although it has existed in other contexts before. For instance, in planes seat reservations were standard for decades. When you bought your ticket, the seat reservation was included and with the check-in you got your seat number. The low cost carriers started selling tickets without seat reservation. It made booking easier for them and they could ask for a extra charge for seat reservations. This was an innovation, but no invention as free seating was already common for trains or buses. 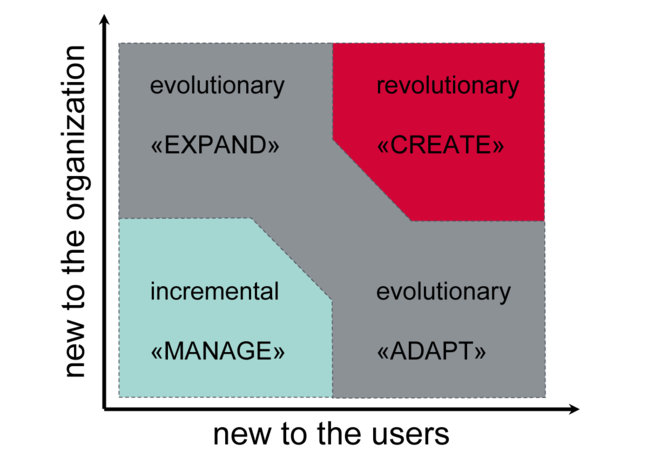 The least innovative type is incremental, offering changes for existing users in an existing offer. A bakery, for example, can offer a new bread based on an existing recipe to its clients by only changing the form. This innovation needs to be managed, for instance with a special marketing action.

Finally, if the innovation is new in both ways, it is revolutionary or disruptive. There was a famous example of a bakery in New York that combined donuts and croissants to a ‘cronut’. In the best way of Schumpeter, this was a new combination. And the customers loved it! 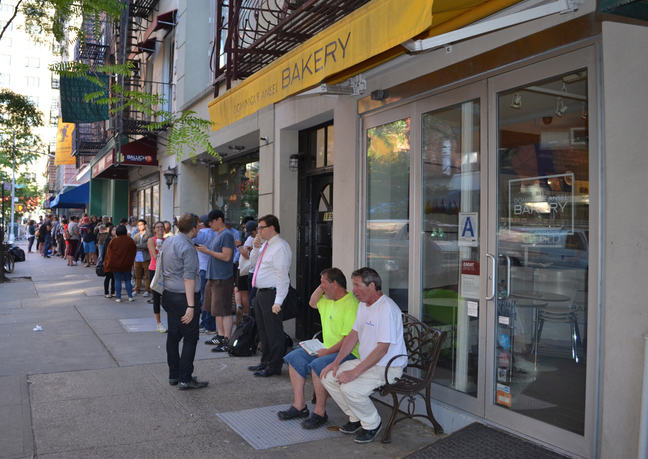 Waiting line in front of the Dominique Ansel bakery in New York. (by David Winograd)

Often, disruptive innovations come from outside the existing industry. With the iPhone, Apple disrupted the market of mobiles without having produced any telephones before. Tesla is about to disrupt the automobile market by constructing its cars more as a computer than as a mechanic construction. By questioning and reshaping processes, structures, and resources, great changes can come from small beginnings.

The explanations so far have focused on business innovation and development – and these are often based on technological innovation. But there are also examples that have little technological and much conceptual innovation. Just as the concept of low-cost carriers that changed the flight industry.
F. Hoffmann-La Roche, one of the biggest pharmaceutical companies, is known today for its medical innovations. However, the first innovation by Fritz Hoffmann was neither in chemistry nor pharmacy, but in production. The company was the first to offer standardized medicine. Before, pharmacists would mix the medicine every time directly for the client, which led to variations in the mixture. The standardization allowed for a constant treatment and a better dosage of the medicine.

Research and share another example of a revolutionary or disruptive innovation and the impact it had in the comments.