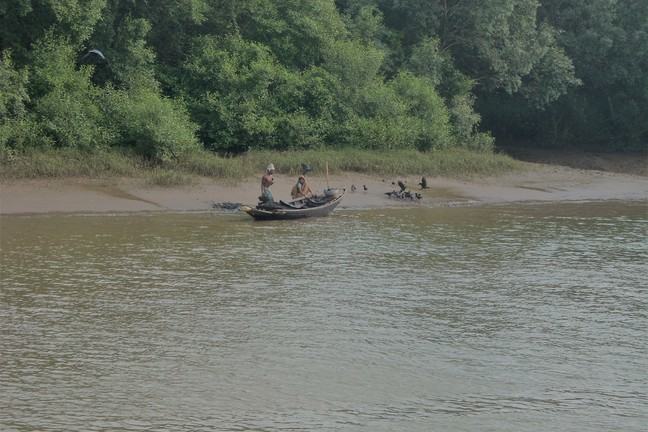 Following on from her introduction, Vasudha explains more about the Odisha case study. In this, the first of three steps, Vasudha discusses state policy and Bengali fishers.

The government of India and the state government of Odisha take a very active interest in marine conservation. There is a clear legal architecture in place to ensure this, the Wildlife Protection Act of 1972 and the Odisha Marine Fisheries Regulation Act (OMFRA) of 1981. There are a number of state orders in place to prohibit fishing in Gahirmatha and other key turtle nesting sites. Gahirmatha was declared to be a marine sanctuary with a total ban on fishing in 1997. This was done with little consultation with local officials. Continued turtle deaths, however, have enraged local and international environmental groups.

The state faces a challenge in reconciling the twin imperatives of improving fisheries production and also ensuring the conservation of marine resources involved with the Odisha traditional fish workers union. Arguments about the prior traditional rights of indigenous Odiyas over immigrant Bengalis have politicised this rivalry considerably and also crippled the functioning of the trade union itself.

Fishing in the northern coast of Odisha where Gahirmatha is situated has historically been the domain of traditional Odiya fishing castes. The principle Odiya fishing castes are called the kaibartas, gokhas and rajabanshis. These have predominantly engaged river fishing and take much cultural pride in what they see as their indigenous fishing practises. However, fishing in the region has been transformed with the gradual arrival of Bengalis, many of them immigrants from Bangladesh or former East Pakistan. The exodus of Bengalis from this region into India has been a continuous process since the independence of India and Pakistan in 1947, but it peaked in 1971 with the formation of Bangladesh.

Bengalis started fishing in rivers and estuaries in coastal Odisha, but with the restrictions being faced on river fishing within the Bhitarkanika national park, they gradually turned to sea fishing, a process that intensified as even more people arrived into these parts. They demonstrated considerable skill and gradually moved towards motorised gill net fishing. The movement of Odiya fishers also happened towards sea fishing and this probably took place around the 1980s prompted also by the rising demand for marine fish all over India.

Odiya officials nursed complex and mixed feelings about the arrival of Bengalis into these parts. At the general level, the roll of Bengalis in teaching the art of sea fishing to Odiyas is acknowledged. However, there have also been clashes over fishing turf and fishing rights between Bengalis and Odiyas in the past. The wealthy and influential leader of the Odiya kaibarta fishing caste association, whom I interviewed, very much decried the destructive influence that Bengalis have had not only on traditional and indigenous Odiya fishing practises, but also on the marine ecosystem such as by journeying from river mouths to the sea in motorised boats during the fish breeding season disturbing these fish in the process.

Over the years, even as everyday relations amongst Odiyas and Bengalis have considerably normalised, bickering persists amongst individuals who are in positions of influence. One long-standing rivalry is between this Odiya fishing caste leader and a smaller Bengali fishing leader who has been actively involved with the Odisha traditional fishworkers’ union. Arguments about the prior traditional rights of indigenous Odiyas over immigrant Bengalis have politicised this rivalry considerably and, to a certain extent, have also crippled the functioning of the trade union itself.

In the next step, we will look at Odiya environmentalism and marine class relations.