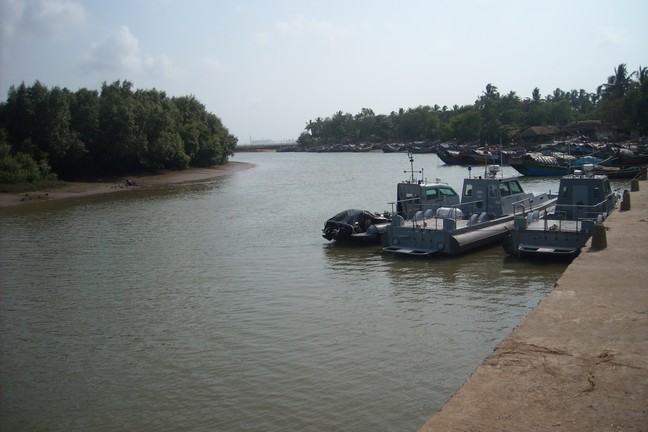 Vasudha provides some concluding observations from her research.

Finally, it is out at sea where the fishers encounter the authority of the state even as they try to negotiate sanctuary boundaries. It is also here where this encounter is shaped vitally by the reality of marine class relations. Accordingly, it is at sea where the contours of Odiya environmentalism appear to be the least dominant. One area where this is evident is that of the enforcement of sanctuary boundaries. Briefly put, complying with as well as enforcing the law is difficult at sea. Fishers of all sizes deny transgressing the sanctuary boundaries. They typically mention the lack of appropriate technology that can direct them better at sea.

However, the marine class system very much shapes agility in negotiating restrictions since trawlers are more effective at fishing by stealth as compared to small gill net boats. Enforcement of the law is also difficult and risky for the state. Trawler crews have been known to use intimidation tactics at forest guards even throwing dynamite on occasion. Out at sea, whether one is Odiya or Bengali is of little consequence.

This research seeks to make a contribution to the wider critical scholarship on environmental justice and conservation through a case study of marine conservation and fishers’ politics in the coastal Indian state of Odisha. The broad approach adopted in this paper is of appreciating the question of justice as recognition by engaging with environmentalism as a way of conceptualising politics and society that is based upon a particular construct of environmental problems. This speaks to a much larger concern within critical environmental justice circles. Who’s justice? Thus pointing to the pervasive power of particular discourses in marginalising disadvantaged groups like immigrants and refugees.

While characterising the way in which Odiya environmentalism comes into effect, this research takes very clear view that such a framing of fishers’ politics and social relations is damaging because it crosses over material class differences and ultimately undermines the political solidarity of small fishers. The large majority of marine fishers in the non-mechanised sector are poor. The vagaries of sea fishing together with the extremely exploitative links to the market that they have make for extremely tenuous livelihoods. The overwhelming constraints to their livelihoods on account of the limits to fishing imposed by the sanctuary matter. Moreover, the paralysis being observed in the traditional fish workers’ union is something on account of many factors but clearly a class-based organisation that is continuously undermined by arguments around indigeneity is an important effect of this Odiya environmentalism. At the same time, the research also exposes the limits to this discourse, and its fragility, given that it coexists uneasily with the reality of fishers’ lives and social relations. Our fieldwork also shows how Bengali fishers widely reject the accusations levied, and most Odiya fishers also do not lend credence to these. There are also acts of solidarity, as described in more detail in the paper (Chhotray 2016).

The injustice that conservation policies may contain for local communities is a well-known theme within the wider scholarship. Conservation itself can be interpreted as a dominant way of visualising the proper use of nature, through metropolitan secular projects for national improvement backed up by concrete and often oppressive state interventions. In addition, there may be multiple indigenist-regional narratives around resource use and resource rights that map on to particular notions of regional spaces nested within a larger nation, imaginings of which are not unified either. In this research, the particular contours of a regional Odiya eco-nationalism connect with ideas of territorial sanctity and the abhorrence of ‘infiltration’ by immigrants, as systematically incorporated into successive laws and state policies. In a larger sense then, the paper seeks to draw critical attention to the injustice of misrecognition, through misrepresentation and framing that environmental discourses might engender, although its precise effects may vary from one context to another.

In the next step we discuss the case study