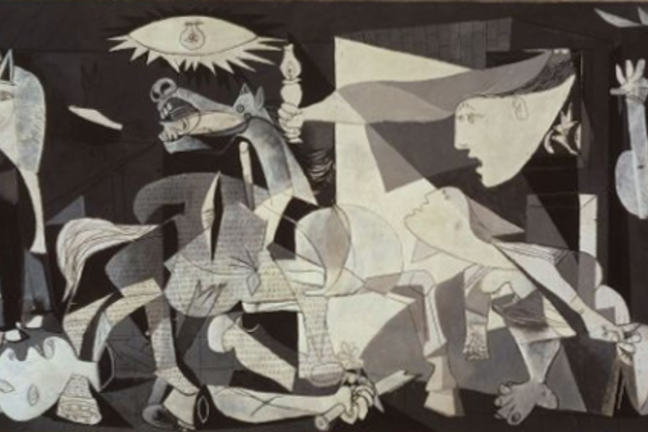 In this activity, we’ll think about how culture can legitimise particular policies. To start with, we observe that art can be political. As art historian Claudia Mesch puts it, art can be ‘explicit in its combative stance or in its tone of political dissent.’

Think, for example, about the many art works reacting against the Vietnam War - from the 1969 Woodstock festival to Francis Ford Coppola’s masterpiece Apocalypse Now (1979). Or: in the nineteenth century, German poet Heinrich Heine, inspired by socialism, responded negatively to growing nationalism in Europe and the supposedly ‘liberal’ monarchs. In his satirical poem Germany. A Winter’s Tale (Deutschland. Ein Wintermärchen), the exiled Heine writes about a journey to Hamburg, mocking German mentality and society.

Conversely, art can also legitimise certain policy responses. Consider the case of Pablo Picasso’s Guernica. Guernica, a small village in Spanish Basque Country, was severely bombed by German airforces, who aided Nationalist Spain during the Civil War. Picasso’s painting was first exhibited during the 1937 World’s Fair in Paris, and subsequently travelled the world. It was used to raise funds for war relief and drew international attention to the conflict.

Through these examples, we can see that art works often take an explicitly political stance, or can be made sense of in the context of the political. Through the stories they tell or the images they conjure up, artists are able to reinforce dominant political ideas or, conversely, challenge them. Apocalypse Now, released some years after the end of the Vietnam War, certainly hasn’t helped the US government rally the people for future warfare: its powerful imagery alerted many to the atrocities of war.