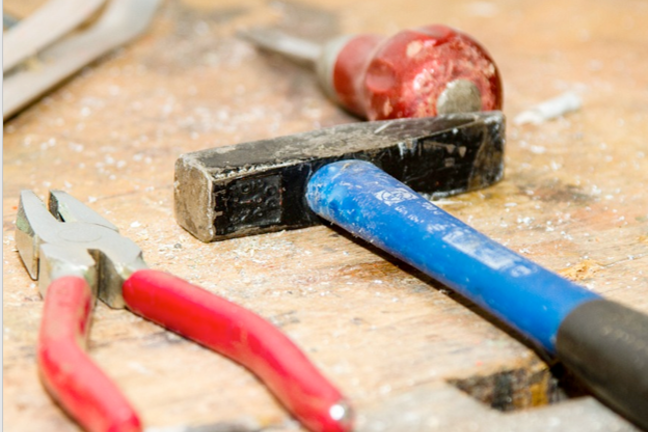 There are so many organic compounds because carbon likes to form bonds to lots of elements. It has four outer electrons, which it likes to share.

For example, in methane (which has the molecular formula CH4), a carbon atom shares its four electrons with four hydrogen atoms – as shown in this dot and cross diagram.

Each of the shared pairs of electrons is called a covalent bond. A covalent bond is typically represented by a straight line as shown by the full structural formula for methane.

In ethanol we see that carbon can form a covalent bond to oxygen.

In propanone, or acetone, we see that carbon can also form two bonds to the same oxygen atom. This carbon‐oxygen double bond is called a carbonyl group.

The simplest way to represent organic compounds is to use skeletal structures. Each line has a carbon atom at each end, unless a different atom such as oxygen is shown, as for butanal. The end of the line stands for a carbon atom bonded to three hydrogen atoms, CH3; this is called a methyl group, sometimes abbreviated as Me. Using skeletal structures helps us to focus in on the areas that are most important. For example, the skeletal structure of butanal is much less cluttered than other representations and it emphasises the –CHO group (typically, reactions of butanal occur directly at, or adjacent to, the –CHO group).

You will notice that the carbon chain in butanal is drawn as a zig‐zag, this is because it shows the approximate shape – the shape of organic compounds is important because, as we will see, it affects their properties.

For a copy of the chemistry images (as pdfs) on this page (and also an image of a molecular model of butanal, which shows the zig-zag shape), see below - this is a general feature of the course content and so you will be able to download the images as you work through the sections.

Have you noticed how many skeletal structures crop up in company logos? Take for example Mercedes-Benz who use a 2-methylpropane in the middle of a circle, or the cyclopropane used by le coq sportif, the cyclohexane used by both Hexagon Composites and Corex Honeycomb or the cyclooctane used by the MG Car Company. Also, the Volkswagen logo has a similarity to 3,3-dimethylpentane, CH3CH2C(CH3)2CH2CH3 (try drawing the skeletal structure, showing the zig-zag shape). Do you know any better examples? In our everyday lives, to chemists, perhaps those zig-zag lines on furnishings, clothes (anyone remember Charlie Brown’s teeshirt?) or road markings are reminiscent of long chains of carbon atoms bonded together in alkanes. (Star Wars fans may also spot the relationship between bicyclo[1.1.1]pentane and an Imperial Shuttle!)

If you would like some further information on drawing organic structures you may find this YouTube clip of use.