This content is taken from the University of York's online course, Exploring Everyday Chemistry. Join the course to learn more.
View course
1.14

0:06Skip to 0 minutes and 6 seconds The rose is one of the best-known and most popular plants in the world. The rose has long been used in symbols - it is the national flower in England. The famous roses of England include the white rose, which was the emblem of the house of York and the red rose of the house of Lancaster, which came to prominence in the Wars of the Roses, in the 15th century - today, university students from York and Lancaster have an annual sporting competition, which is the largest inter-university sports tournament in Europe, called the Roses Tournament.

0:39Skip to 0 minutes and 39 seconds The rose gives its name to a pink colour, it is a type of cut diamond, and a popular girls name - remember the heroine in the film titanic? And what would Valentine’s day be without a bunch of roses? We will focus on the use of Roses in perfumes and cosmetics. Rose oil, the essential oil from rose petals, is a popular fragrance. Let’s see how it is extracted and what organic compounds it contains. The fragrance of rose has been described as tea-like and fruity, and it depends on many factors - from the type of plant, to the time of day, to the age of the plant.

1:16Skip to 1 minute and 16 seconds The scent of roses comes from one or more of over 300 compounds, which, because of their different boiling points, evaporate at different times, so the the aroma changes over time. In rose oil, made from roses petals, just a handful of compounds are responsible the majority of the fragrance. So, how do we extract the fragrant compounds in roses, and what are their structures? A traditional method for isolating constituents in roses is to use steam distillation - the petals are heated with water in a distillation apparatus.

1:50Skip to 1 minute and 50 seconds The mixture of water and organic compounds from the petals does not mix, but this mixture boils at a lower temperature than the boiling point of either component - the water vapour carries over small amounts of the (high-boiling) organic compounds, from the distillation flask, into the condenser, where it is cooled and collected. This gives a water-containing layer with an organic oil on top, which is then separated. The water-containing layer contains small amounts of partially water-soluble compounds and is called rose water. But, the more fragrant constituents are found in the oil, called rose oil. From 10 g of petals, around 2.5 g of rose oil is obtained.

2:34Skip to 2 minutes and 34 seconds The most common method of analysing the rose oil is using gas chromatography-mass spectrometry, or GCMS. A sample of the oil is injected into the GC. A gas carries it through a column, containing a liquid coating a solid support, which leads to the components being separated. Each component is then introduced at different times into a mass spectrometer, where ions are formed, and the ions are sorted according to their mass-to-charge ratio, they are detected, and a mass spectrum is produced for each compound. The spectrum can be assigned to a particular organic compound using a computer which searches through a library of spectra of known compounds - it looks for a match.

3:17Skip to 3 minutes and 17 seconds A major, if not the main component in rose oil, is citronellol. The mass spectrum shows a peak for the molecular ion, this gives the relative molecular mass, which we can use to determine the molecular formula of citronellol. A whole series of fragment peaks are observed, due to the molecular ion breaking down in the mass spectrometer - the mass to charge values of these peaks can be used to identify partial structures; for example, the peak with an m/z value of 69 identifies the part of the molecule containing the alkene. Interestingly, rose oil contains a number of compounds that have similar structures - this includes geraniol, nerol and rose oxides, including trans-rose oxide.

4:01Skip to 4 minutes and 1 second Notice that, like citronellol, all three of these compounds contain ten carbon atoms. You can find our more about these compounds, in the supplementary material. This includes how rose oxides are formed in nature and how this has inspired their synthesis in the lab.

The fragrant compounds found in roses

We will now look at the components of rose oil extracted from Damask rose, which has light pink blooms. This rose is renowned for its fine fragrance, so much so, that the flowers are commercially harvested and the resulting rose oil is used in perfumery.

Analysis of rose oil from the Damask rose has resulted in the isolation of more than 100 organic compounds, whose structures have been elucidated using spectroscopic techniques including mass spectrometry.

This means these alcohols have different shapes and while they both smell rose‐like, geraniol smells more flowery, and nerol more fresh. Reducing the E or Z C=C bond in geraniol or nerol, by adding hydrogen to it, forms citronellol. Next on the list is β‐ionone, containing both a six-membered ring and a ketone group. It has a similar aroma to that of violets. Finally, there is cis‐ and trans‐ rose oxide, which is discussed in detail in the accompanying pdf in the downloads section below. 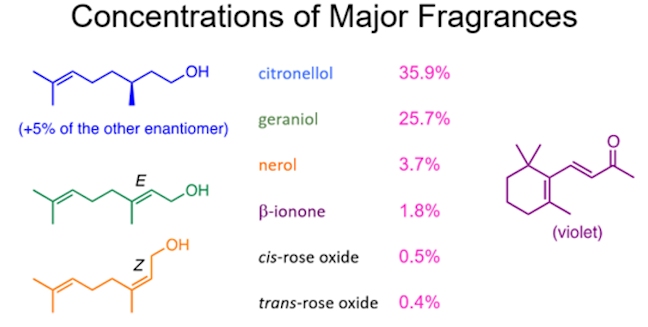 Why do some roses smell sweeter then others?

The heady scent of a perfumed rose is one of life’s great pleasures. Sadly it has been bred out of many commercially available rose flowers in favour of longevity and colour. But, in 2015, researchers unlocked the secret of the rose’s scent… and how to get it back. It was found that a gene, called RhNUDX1, produces an enzyme that is responsible for triggering the production of geraniol (as we have seen, a key ingredient in rose oil) in the petals. This discovery will make it easier for rose breeders to select plants for their fragrance. We could even see the gene inserted into existing roses to create genetically modified variants with all the existing vase life/strong stem characteristics, but with added perfume (just like the creation of genetically modified blue roses).

It now appears that plants like petunias actively emit their fragrances and smells thanks to transporter proteins inside plant cells rather than just release them passively (i.e. the scent molecules ‘hitch a ride’ on a particular protein to escape the flower). This was demonstrated when genetically engineered flowers containing more of the protein were found to release more of the scent molecules. This new discovery means that plants use energy to smell the way they do, offering a new insight into the importance of plant communication.

An experiment involving over fifty students showed that studying close to a rose-scented incense improved their test performance. The results showed a link between rose-scented studying and higher information retention, with an overall average increase in learned information of around 30% for students who used the incense during studying and sleeping. So, can sleeping with rose-scented incense nearby give your brain a learning boost, allowing you to retain more information that you may have learned during the course of the day? Further studies will be needed, but you may also be interested to know that it is not just the smell of roses that could aid learning. In 2013, a study found that pupils working in a room with the aroma of rosemary, in the form of an essential oil, achieved 5% to 7% better results in memory tests!

Fragrances can trigger powerful feelings and memories. Perhaps the smell of a rose-scented soap reminds you of your childhood? Or a favourite old book whose pages remind you of whiling away the hours in libraries? This ‘aromatherapy’ works because you have past emotional associations with the scent you are smelling. It has been explained by the intimate connection between the area of the brain that processes smell and those that process emotion and emotional memory – the amygdala and hippocampus. This may be why smell, more than any other sense, is so successful at triggering emotions and memories.

Are there any scents that conjure up positive memories for you?