This content is taken from the University of York's online course, Exploring Everyday Chemistry. Join the course to learn more.
View course
3.18 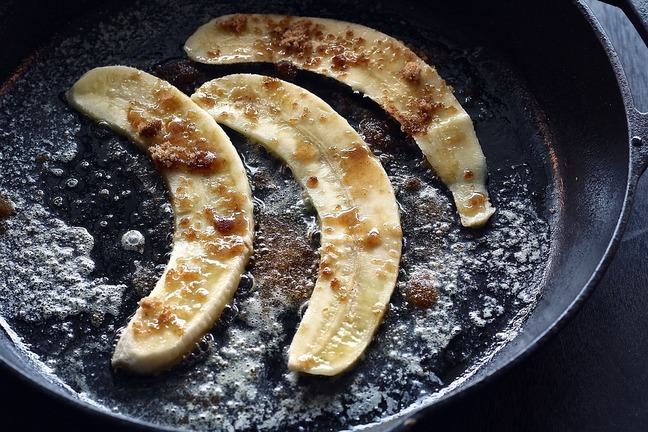 The Maillard reaction is an umbrella term for a number of reactions that can produce a complex range of products. As it occurs in almost every food we cook it is the most widely practiced chemical reaction in the world.

Tools of the trade: understanding the Maillard reaction

The Maillard reaction is a very important flavour-producing reaction, as illustrated when sugar forms brown nutty-flavoured caramel, in a process called non-enzymatic browning. It is also an important reaction in developing the flavour compounds in tea and coffee. Before coffee beans are roasted, they lack the aroma of roasted coffee beans, and the Maillard reaction is very important in providing the characteristic flavour of a brew.

The first step of the Maillard reaction is a sugar-amine condensation reaction to form an N-substituted glycosylamine. The carbonyl group on the glucose sugar (C=O in red) reacts with the amine group (NH2 in green) in a protein or amino acid in the food to form an imine bond (in pink) in the N-substituted glycosylamine, together with water. Notice that the sugar (glucose) reacts when it is in an open-chain form (you may remember that for most of the time, glucose exists in a cyclic form).

The mechanism for the first step of the Maillard reaction involves the nitrogen lone pair from the amine group attacking the electrophilic carbon atom on the aldehyde carbonyl (C=O). Electrons are pushed from the double bond onto the oxygen atom giving it a negative charge. A proton is then transferred from the positively charged nitrogen to the negatively charged oxygen atom forming a hemiaminal (in pink). The oxygen atom then donates its lone pair to a proton forming –OH2+, which is a very good leaving group. Finally, the nitrogen can donate its lone pair to form a new C=N bond of the imine in the N-substituted glycosylamine; in the process, it kicks out H2O as a leaving group.

The second step in the Maillard reaction is the Amadori rearrangement; a spontaneous reaction even at temperatures as low as 25 °C. The Amadori rearrangement is an isomerisation reaction (the N-substituted glycosylamine, 1,2-enaminol and the Amadori compound all have the same chemical formula, with the atoms arranged in different ways, and so they are isomers of each other) that results in the formation of a ketosamine called the Amadori compound – this contains both a ketose (a sugar bearing a ketone) and an amine.

The isomerisation reaction (called an imine-enamine tautomerism) that occurs between the N-substituted glycosylamine and 1,2-enaminol is reversible. The nitrogen atom in N-substituted glycosylamine donates a lone pair of electrons to a proton, forming a new N–H covalent bond; following this, the two electrons in the C–H bond (in pink) are donated to form a new carbon-carbon double bond, pushing the electrons in the C=N double bond onto the positively charged nitrogen atom.

The second reversible isomerisation reaction occurs between the 1,2-enaminol and the Amadori compound, and is an example of keto-enol tautomerism. In the forward reaction, two electrons from the O–H oxygen (in the 1,2-enaminol) are donated to a proton, through the C=C double bond, and this is followed by deprotonation.

The Amadori compound can then react to form several different products, including hydroxypropanone, all of which can react again to form even more products. The products that are formed depend on whether the reaction mixture is alkaline or acidic, so, this is a complicated process.

So, there is still a lot about the Maillard reaction that remains unclear, however, its responsibility for the flavour development of cooked or roasted foods is recognised as being very important.

As the Maillard reaction is such a complicated process, with a number of tricky reaction steps, we have summarised the key steps in the poster below.

Alongside the Maillard reaction, the Strecker degradation (established in the 1960s) also plays an important role in the formation of flavour compounds - take a look at the information in the downloads section below.

Does coffee cause cancer?

Perhaps you remember the ruling made by a California judge in 2018, that coffee companies must serve the drink with a cancer warning? It arose from the presence of acrylamide (H2C=CH–C(=O)NH2) in coffee, which is formed from a Maillard reaction involving the amino acid asparagine (HO2CCH(NH2)CH2C(=O)NH2) – evidence has shown that acrylamide is a likely carcinogen (a cancer-causing substance).

However, each 150 mL cup contains only a trace amount of acrylamide, 0.9-2.4 micrograms – one estimate suggests an 80 kg adult would need to consume over 208 micrograms of acrylamide to have an increased risk of cancer. Interestingly, the same scientists who classified acrylamide as a carcinogen also found no conclusive evidence that drinking coffee caused cancer (and in 2016, the World Health Organisation took coffee off its list of possible carcinogens).

(By the way, concerns over acrylamide in foods has also made the headlines. For example, in 2017, the Food Standards Agency (FSA) warned that acrylamide is produced when starchy foods are roasted, fried or grilled for too long at high temperatures, so browned toast and potatoes could be a cancer risk. But, once again, because of the small quantities of acrylamide formed, it was subsequently reported that someone would only be at risk if they consumed 320 slices of browned toast each day!)